The following is true for middle Tennessee…
Nearly 48 hours of straight rain.
Over 19″ of rain in some regions.
24 people dead.
More people missing.
52 counties declared disaster areas.
Over $1.5 billion in property damage in Nashville alone. 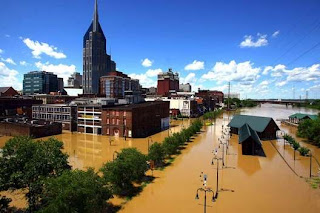 You may have heard, or you may not, about the flooding in Nashville the first weekend in May.
National news coverage of this event has been negligible, to say the least. The oil spill in the Gulf had ocurred just over a week earlier, and the failed bomb attempt in New York ocurred the very same weekend as the flood. So we were a little left out.
My own parents who live in the same state 2.5 hours to the east did not even know to call and check on my family because the flood was not being covered on their local news.
The following video tells a pretty good story of what has been going on down here.
So, please, take a moment and see life through the eyes of a middle Tennessean.

Click on the following links for more photo coverage of this tragic event:

Aerial views of the flooding.

This is a video of one of our interstates (we have 3 that intersect through Nashville) with approximately 70 vehicles trapped underwater. A nearby portable building from a school was lifted from its foundation by flood water and washed into the the interstate. 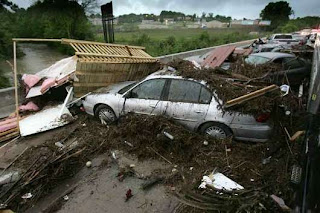 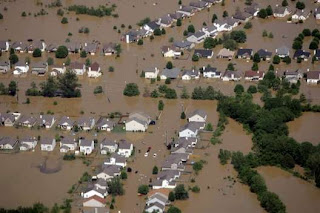 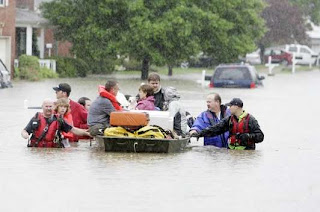 Many families had to be rescued by boat. 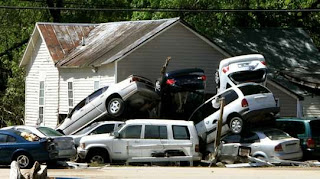 A car dealership had several vehicles get washed away and many of them ended up piled in this yard. 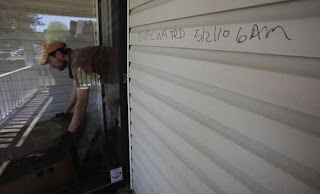 Evacuation time noted on the outside of a home. 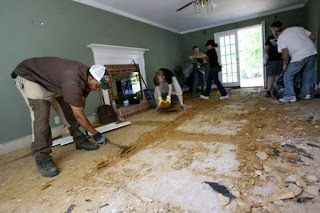 Clean up will go on for months for thousands.
And they are the lucky ones.
Some have nothing left to clean up.

People have had to pull their belongings outside to sort through the mess.
A scene not atypical for many middle TN neighborhoods right now. 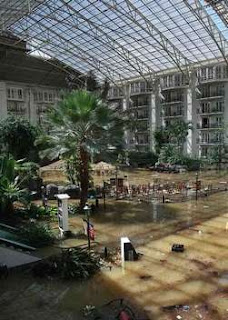 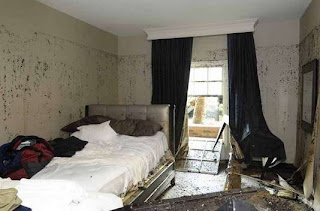 Room on the first floor of the Opryland Hotel.
The water level reached 10 feet. 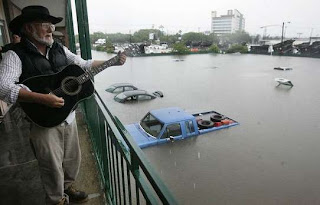 A man plays guitar on the balcony of a motel. 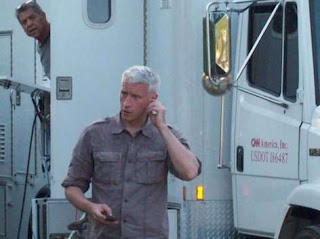 Even Anderson Cooper, the man known to be onsight within a couple of days of a disaster, did not arrive in Nashville until last Thursday.
Its awful. Its horrifying. But, you know what?
We will get through this.
We are Nashville.
We are Tennesseans.
Not only are we the first to volunteer when disaster hits our brothers and sisters in other states,
we are the first to help each other. Here. In Tennessee.
One of the reasons we have not been the news since the flood is that we are not begging for attention. Local volunteers have taken over. We’re running our own fund raisers. Looting is scarcely heard of.
But we do need your help!
Here are a few places to learn how to donate and help the flood victims of middle Tennessee.
Hands On Nashville lists ways to donate and volunteer.
The Red Cross is asking the public to donate money only. Text “RedCross” to 90999 for $10 donation. It cannot accept material donations of items.

Salvation Army Call 1-800-SAL-ARMY to donate, and make sure to designate to Nashville Flood Relief.

Donate by buying a t-shirt! A local graphic design company is selling t-shirts for $20, $17 of which goes straight to charity. Follow them on Facebook to help spread the word.

Are you local? PHOTOS for the Flood is a group of area photographers getting together to do 20 minute photos sessions for $50. The photos can be of anyone, any theme. Bring yourself, your friends, your family, and props! Each session costs $50, all of which goes straight to the Nashville Area Red Cross and Hands On Nashville. Read more about it on their Facebook page here.

What’s needed most?
Generators, cleaning supplies, diapers and other supplies that can assist in recovery efforts.

*Our country music stars are helping us out!*

Middle Tennessee is an amazing place. Last Thursday night, only 4 days after rain had stopped, we had a telethon to raise money. Put together quickly by Vince Gill and friends at a local tv station. Among the guest singers were Keith Urban (who lost most all of his music equipment in the flood), Amy Grant, Keb Mo, Naomi Judd, Darius Rucker, and Alison Kraus just to name a few. Taylor Swift called in and donated $500,000! All in all we were able to raise over $1.7 million. Amazing!

CMA Music Festival
And, of course, the CMA Musical Festival that occurs in Nashville every year will go on as planned June 10-13. There were thoughts of canceling the event, but you know what? Nashville needs you! CMA will donate 50% of the Festival earnings to flood victims!

Do you like country music? Have you always wanted to see multiple country artists perform on the same stage? Now’s your chance! Come support middle Tennessee and see some great performances, too!

Can’t make it to Tennessee? Can’t afford to donate?

Just help us spread the word that Tennessee needs YOU! 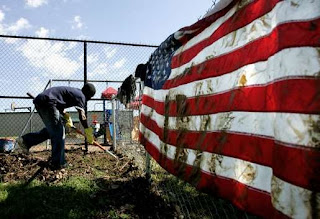 Thank you for reading this, my friends.