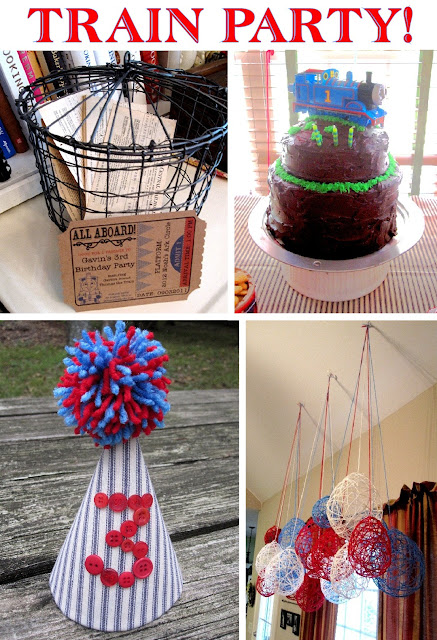 So far I’ve shared the Train Ticket Invites
and my Pinterest train inspiration board.
Now it’s time to share the big day!
The day of our party was the actual birth day of my now 3 year old.
That made it all the more special! 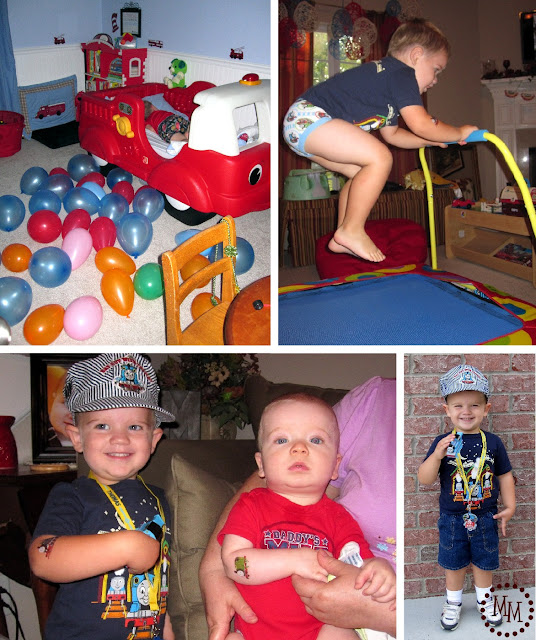 As soon as my little guy went to bed the night before the party, my mom and I got busy blowing up as many balloons as we could manage. Once he was asleep we placed them all in the floor of his bedroom to surprise him when he woke up on his birthday! He loved it!
(Idea pinned here.)
We had set up his first birthday present in the living room, and he found it right away. I thought if he had a toddler trampoline it would help him exert that INSANE amount of energy he has. I’m happy to report its working! 😉
After the trampoline, we told him about his next present. Daddy was taking him to A Day Out with Thomas! We had bought the extra accessories to go with his ticket (conductor’s hat with Thomas patches, Thomas whistle, and lanyard with Thomas charm). He was beyond thrilled! We also had some Thomas and friends tattoos for him to wear to see Thomas. He decided his baby brother needed a Percy tattoo. (Yes, I tattooed my baby. Please don’t judge!) 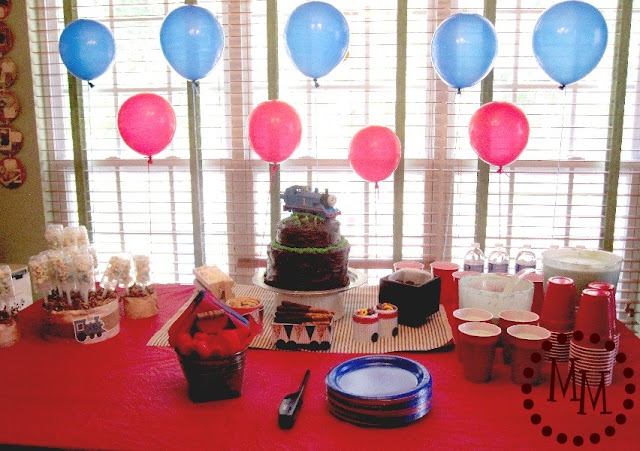 As soon as Daddy and the birthday boy were out the door, my mom, dad, and I got to work getting ready for the party.
One of these days I’ll take the time to close the blinds before taking pics of the table set up…
Sorry for the poor quality!
I have to say I really love the balloon backdrop though.
I just taped them to the underside of the table. 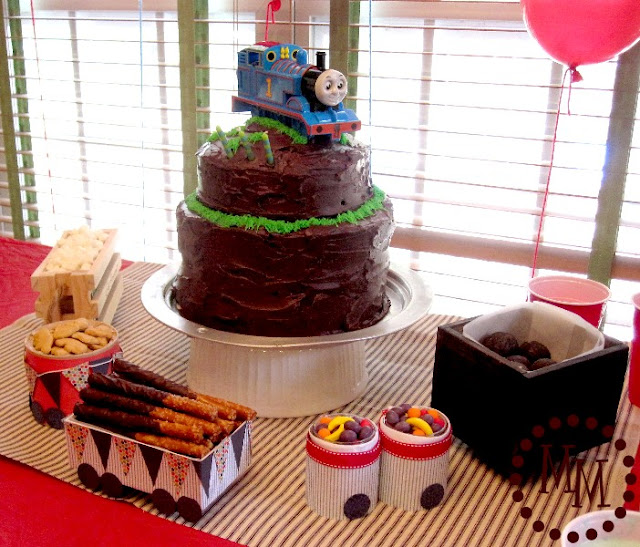 The birthday cake was my first attempt at a tiered cake. This thing was massive! And way more cake than we actually needed. We only ate the top tier during the party! The bottom is 3 layers of pound cake and the top is 2 layers. The chocolate icing was absolutely divine! And the Thomas on top of the cake was a fantastic whistle that actually sounds like a real train (found at Stein Mart). I added some green icing piped through the “grass” tip.
(Idea pinned here.)
I surrounded the cake with various “train cars” made from dressed up items
I found around the house.
(Idea pinned here.) 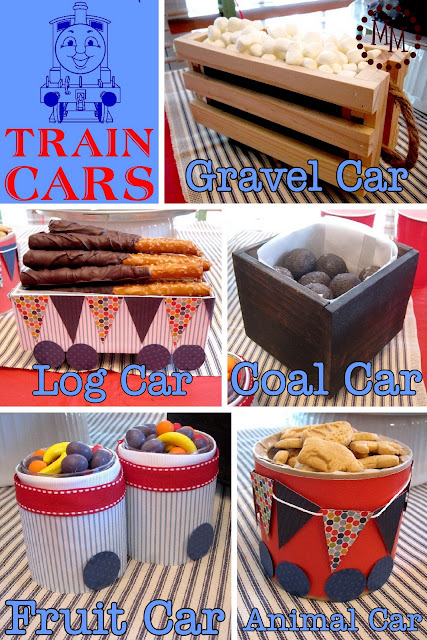 The “gravel car” was full of marshmellows, and the car itself is actually a small crate that came with some scrapbooking flowers.
The “log car” was chocolate covered pretzels and was made from a cardboard box covered and decorated with scrapbook paper. I put some foam underneath the “car” to raise it off of the table and cut some circles out of scrapbook paper to be my wheels.
The “coal car” was chocolate doughnut holes (which turned out to be rather difficult to find!) and was made from a small wood planter that I recently found on clearance at Joann’s and hadn’t used yet.
The “fruit cars” were full of Runts and made from two bouillon cube containers I had put in my upcycle stash. I decorated them with scrapbook paper and ribbon.
The “animal car” was Animal Crackers! And it was made from a peanut can and covered and decorated with scrapbook paper.
I lined the interior of all of the train cars with parchment paper. 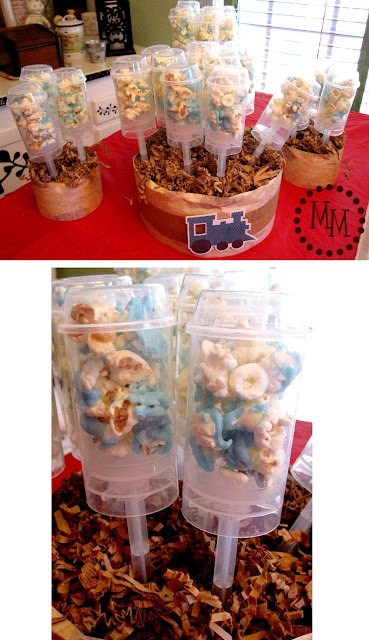 I found these cake shooters on Etsy for $1 a pop at Untie the Ribbons!
Since I was going to have so much cake, I decided to fill the shooters with chocolate covered popcorn. The white chocolate was dyed blue to match the color scheme of the party. I think they turned out so cute!
(Idea pinned here.)
I stuck the shooters into styrofoam wrapped with scrapbook paper and then covered the styrofoam with paper filler. 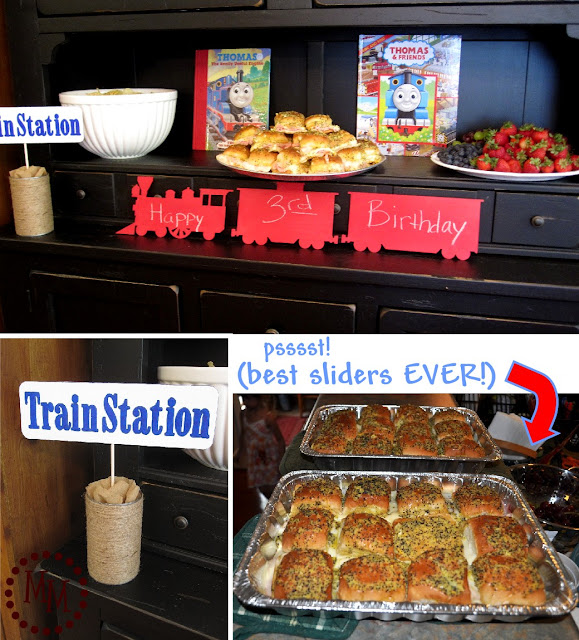 I used my hutch to serve lunch and decorated with some Thomas books from my son’s stash.
The train station sign and red train are a from a set of chipboard I found at a recent scrapbook convention. I painted the train with red chalkboard paint.
And these ham and cheese sliders?
Best.Things.EVER!
And I actually was able to make them the day before and stick them in the oven when we were ready to eat.
(Recipe pinned here. I left off the mayo.) 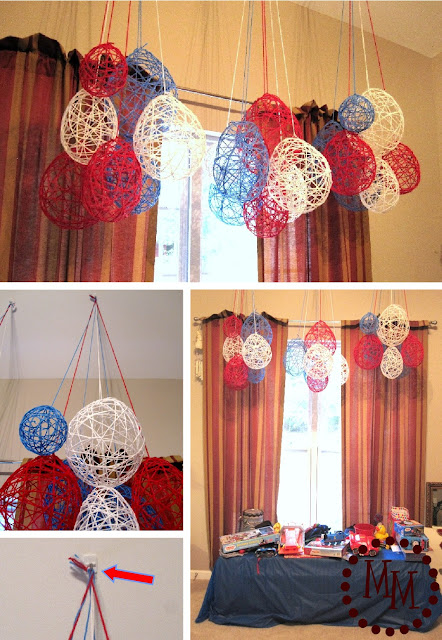 Now for some decor!
These yarn balls are just too fun! I used them to decorate the area over the gifts. I hung them from some 3M hooks on the ceiling. And the best part? Because of their color scheme I can use them to decorate my son’s room (after I finally take them off the ceiling… yes, they are still hanging in the living room!).
(Idea pinned here.) 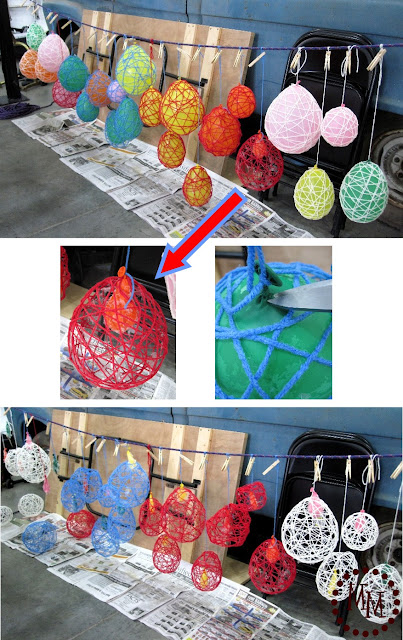 I wanted to quickly show you the behind the scenes of the making of the yarn balls. I went a little crazy and made a TON of them!
I wasn’t sure at first how they were going to turn out. After several hours the yarn didn’t seem very stiff. The instructions said to allow them to dry overnight (I’m impatient!) so I finally let them be and, lo and behold, the next morning they were perfect!
A couple of the balloons had deflated already (see the arrow above), and the rest I simply snipped a small hole where they where tied together. The idea was to let them deflate slowly so the yarn could come off of the balloon without becoming deformed… 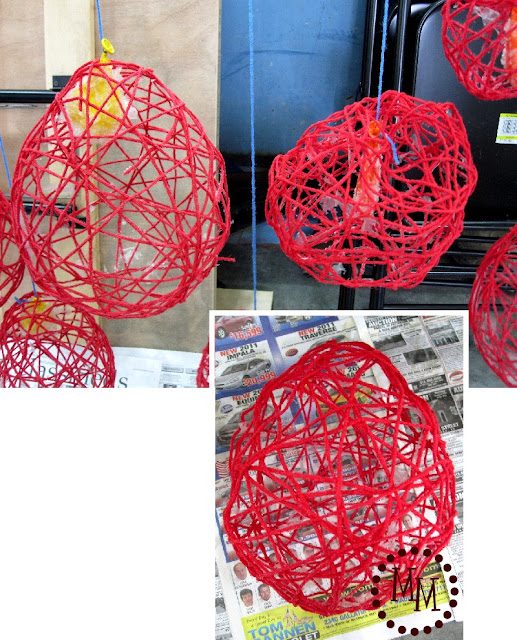 Though some deformaties still occurred! No worries. The yarn easily retook its orginal shape with a little prodding. 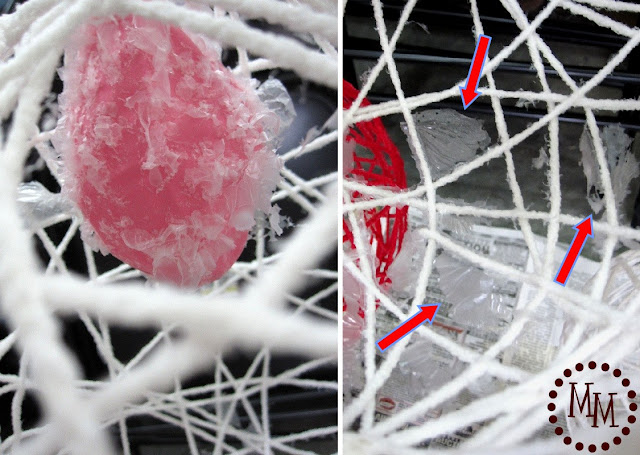 I wanted to show you the nasty flakey after effects of the glue. Most of it stuck to the balloons, but some stuck to the yarn (see the arrows). I found the best way to get it off was to just pick it off by hand. 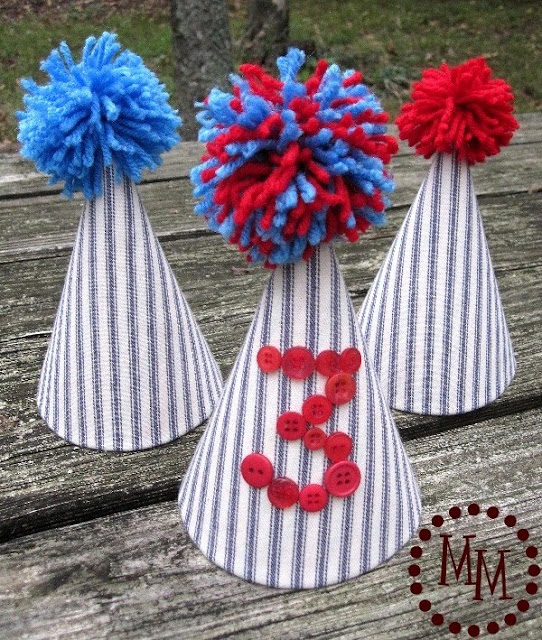 And now my absolute FAVORITE part of the party!
The party hats!!
We were going to have 6 little ones at the party so they each got a hat to wear and take home. 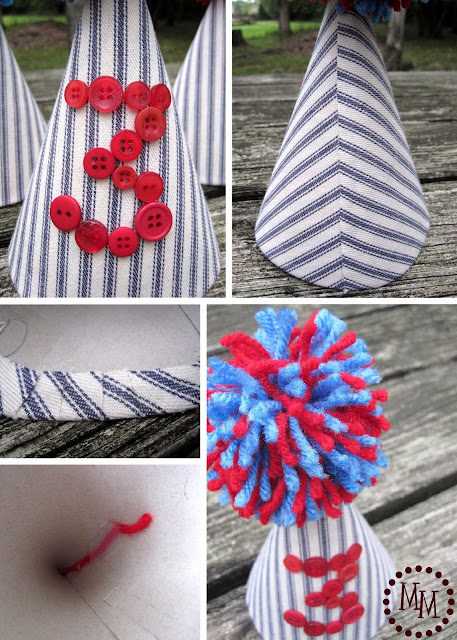 The hats are cheap cardboard hats covered with fabric. I took one of the hats apart to use as a template to cut my material. I used Beacon’s 3-in-1 to adhere the fabric to the cardboard hats. I made pom poms from the left over yarn I had from the yarn ballons. I left a long piece of string on each pom pom and threaded it through the top of the hat and taped it down. I also glued the pom poms straight to the top of the hats.
To make my birthday boy’s hat a little more special, I used some buttons to draw a 3 on his hat. 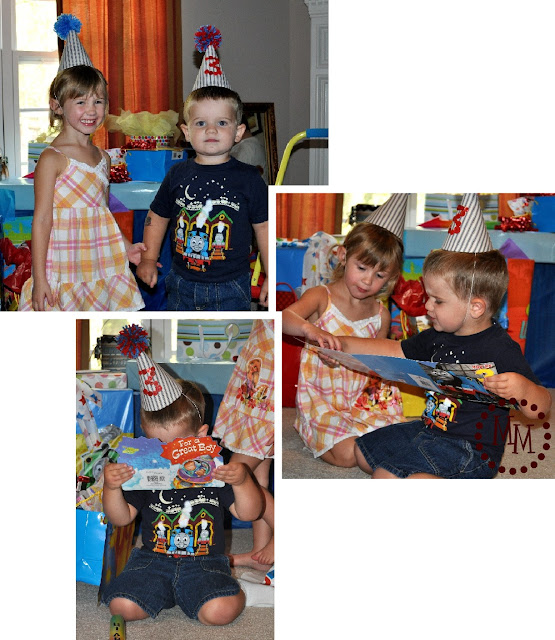 A few shots from the party. My birthday boy’s cousin was a big help opening all of the presents (which he gladly let her do!). Isn’t she adorable?
That last photo just cracks me up! The child is 3. He can’t read! I have no idea what he’s doing with that card! lol! 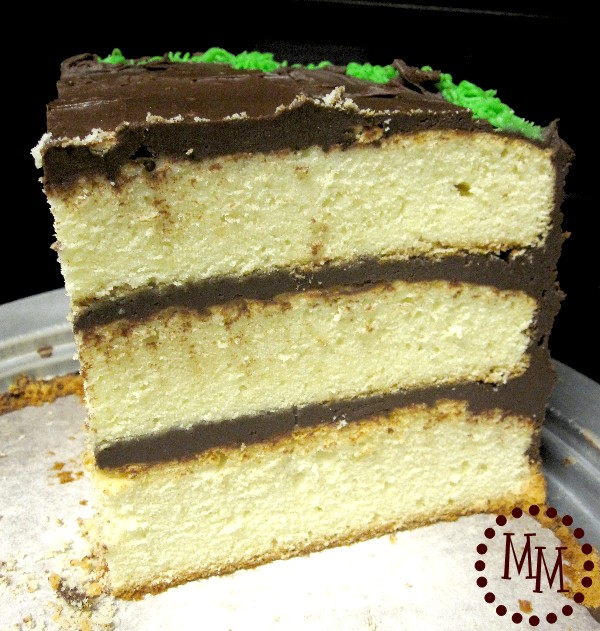 And I leave you with a shot of the birthday cake. It took a lot of sending cake off with guests and several days of eating to get the cake down to this much. But it sure was yummy!
I think the party was a big success!
There were several projects I had in my head that never got made, but I let it go because, you know, I’m the only one who knew they weren’t getting done.
A big thanks to “Uncle” Chris and my dad for some of the photos of the party used here!
Thank goodness someone was taking them so I could focus on my birthday boy!
And thank you mom and dad and hubs for all of your help to make the party the smash that it was!
I link up to these great parties!
Also linking this party up to Bird’s Party Blog!
Linking up to

Love this and love the yarn balloons over the table. Very creative! Thanks for linking up to The cSI Project. I enjoyed reading your entire post.

What a fantastic party! You provided me with lots of amazing ideas for my little man who is turning 3 in March - so I thank you! He is such a huge train fan that I can't wait to have fun doing some of the things you did. :) Thank you for the inspiration!!

A Lived in Home

What a great party theme! The details are superb and the sliders looks delicious! Come visit me- www.alivedinhome.blogspot.com

I would love for you to link up your creation at http://www.jaqsstudio.com/2011/10/jaqs-studio-first-ever-linky-party.html

What a fun looking train party! I love the colors you used and those yarn balloons are awesome! Great decorating ideas!