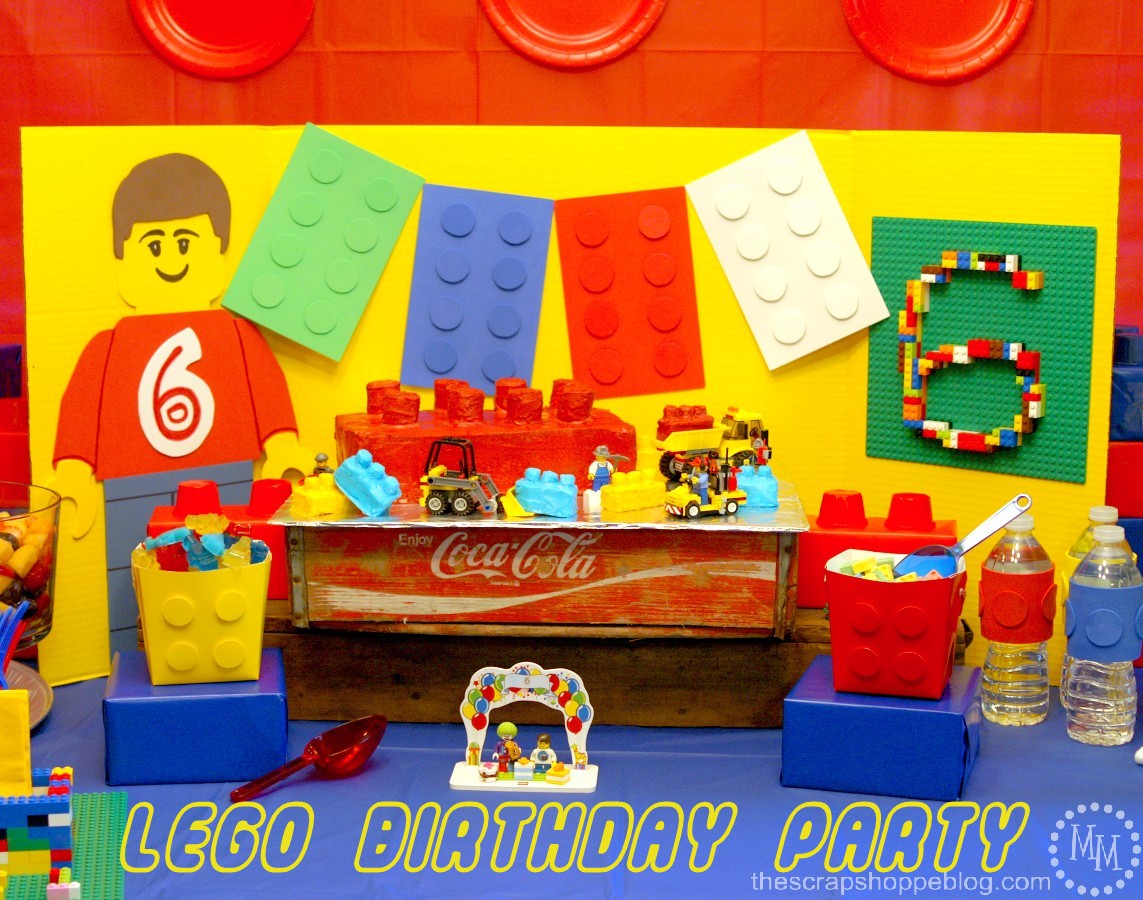 Over the weekend we threw our first family AND friends birthday party.

Luckily the weather cooperated (for the most part) so we weren’t all squished indoors together.

We take parties seriously around here so we’re talking immediate family, grandparents, aunts, uncles, cousins, great aunts, great-grandparents, best friends of mine and the hubs with their kids in attendance… and that’s just the usual company!

This year we added an additional 6 friends with their parents and siblings. Quite the crowd!!

He is crazy for those little bricks!

He specified a Lego City party so, where I could, I focused more on the City characters.

Everything else was straight up Lego bricks! 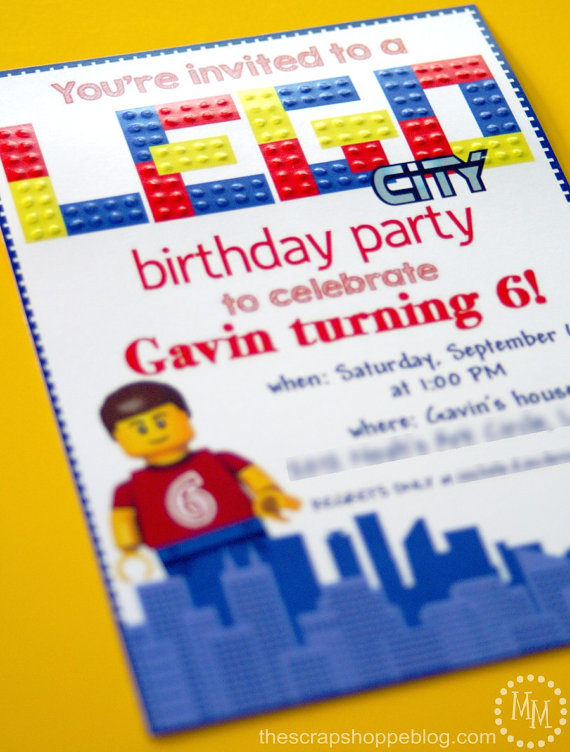 It also played a role in some of the decor for the party as you’ll soon see. 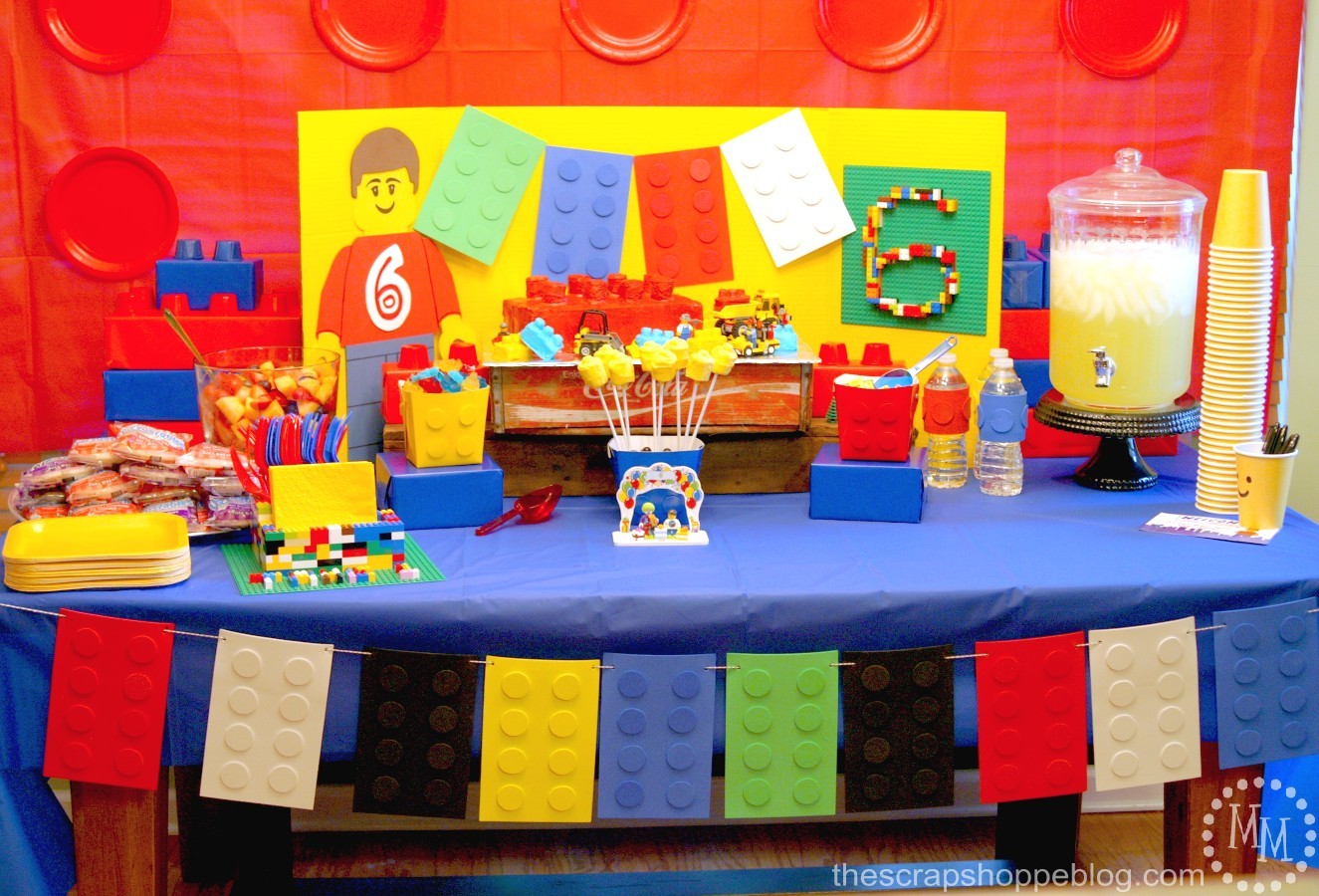 Our main colors for the LEGO birthday party were red, blue, and yellow.

Very similar to our Superhero Party a couple of years ago!

I used a yellow cardboard presentation board as the backdrop, but trimmed it down by 8-10″

The Lego banners are made from foam rectangles that you can purchase at craft stores or even Walmart.

You get a stack of 50 for ~$6. I cut circles out of some of the sheets and glued them to other intact sheets of the foam.

The Lego “bricks” on the table are gift-wrap covered cardboard blocks (affiliate link).

The gift wrap was only $.99 per roll at Party City.

I spray painted candy cups to match the red and blue gift wrap and set them upside down on top of the blocks to look like Lego bricks. 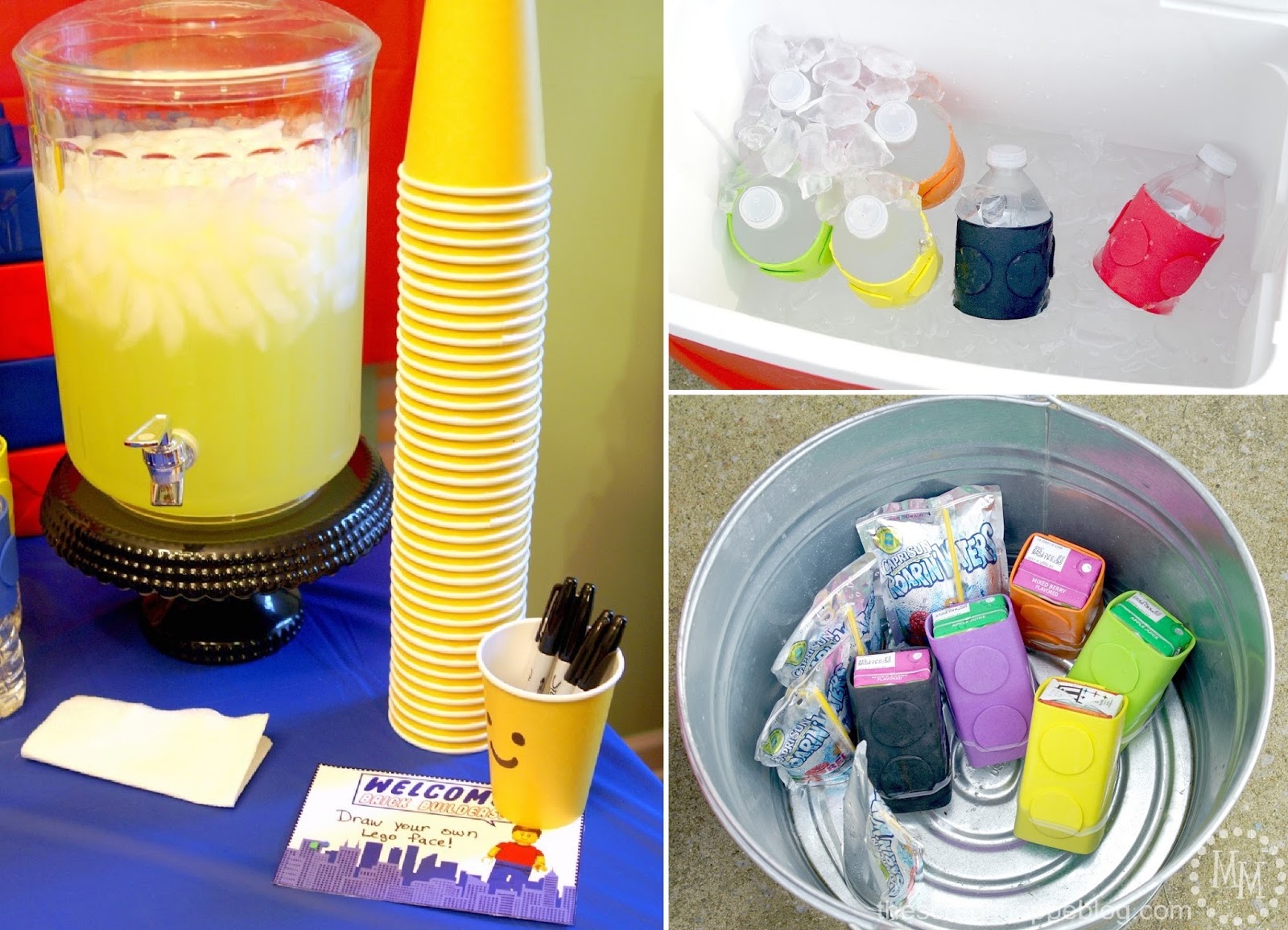 I had a large drink dispenser full of lemonade alongside a large stack of plain yellow paper cups.

I put a note on custom made stationary for guests to draw their own Lego faces on the cups and left several Sharpies to be used.

I wrapped water bottles and juice boxes with the craft foam and glued on more foam circles to look like Lego bricks.

I love this because the foam can get wet in a bucket of ice and be completely unaffected. 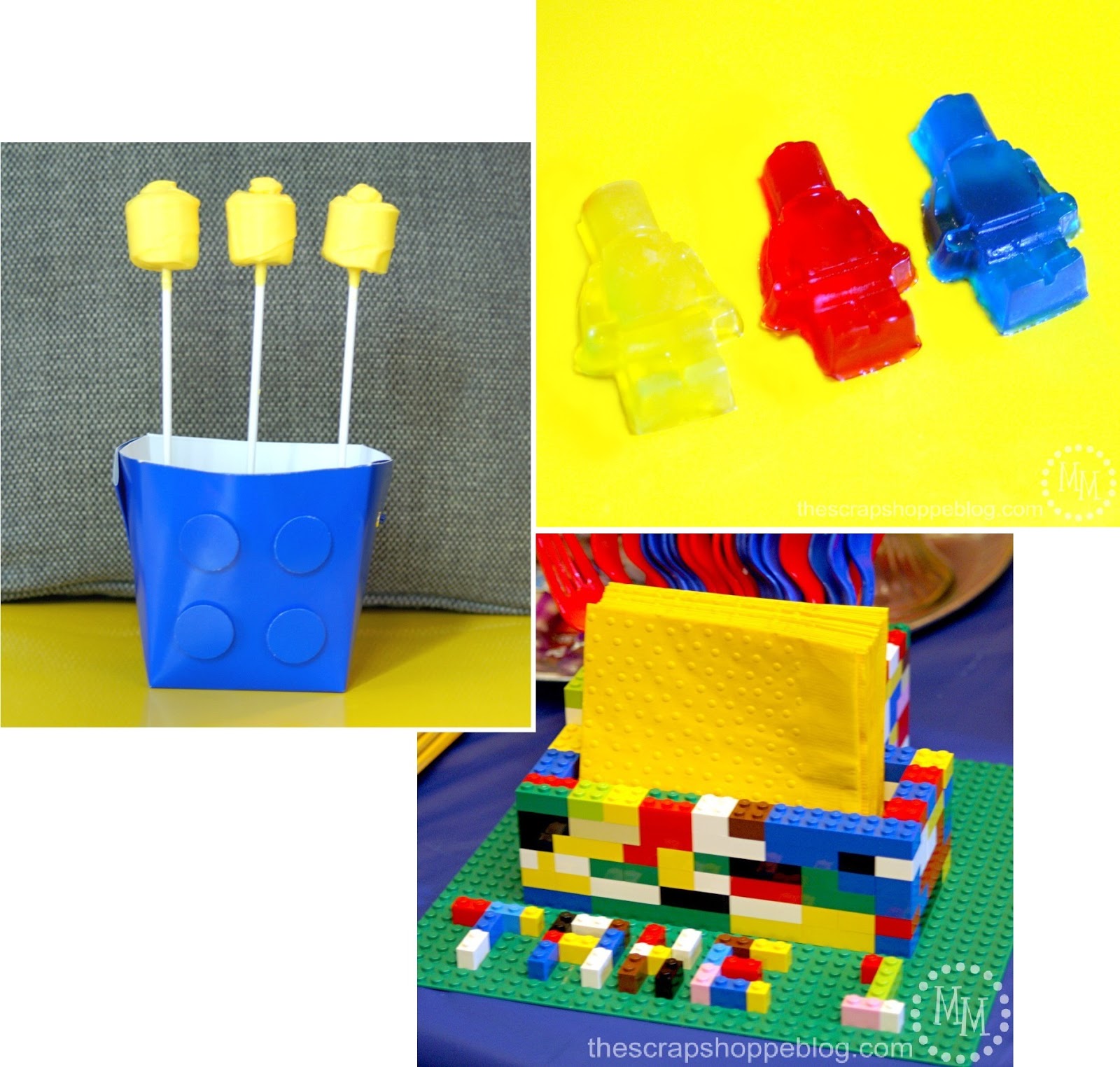 I shared my gummy recipe earlier this week.

We made the marshmallow pops by placing large marshmallows on lollipop sticks then dipping them in yellow candy melts.

Cut a mini marshmallow in half and place one half on top of the dipped marshmallow.

Use a toothpick to cover the mini marshmallow in candy melts.

I cut the lid flaps off of colorful take-out boxes then punched 1″ circles in them and adhered them back onto the front of the take-out boxes with 3-D foam tape.

For the forks and napkins we made a fun holder out of, what else, Legos!

Psssst! I also embossed the napkins!

That may seem a little extreme but, honestly, 40 napkins took about 10 minutes to emboss.

I was able to emboss two at time, and they turned out SUPER cute!

I didn’t even cry when people wiped their mouths on them! 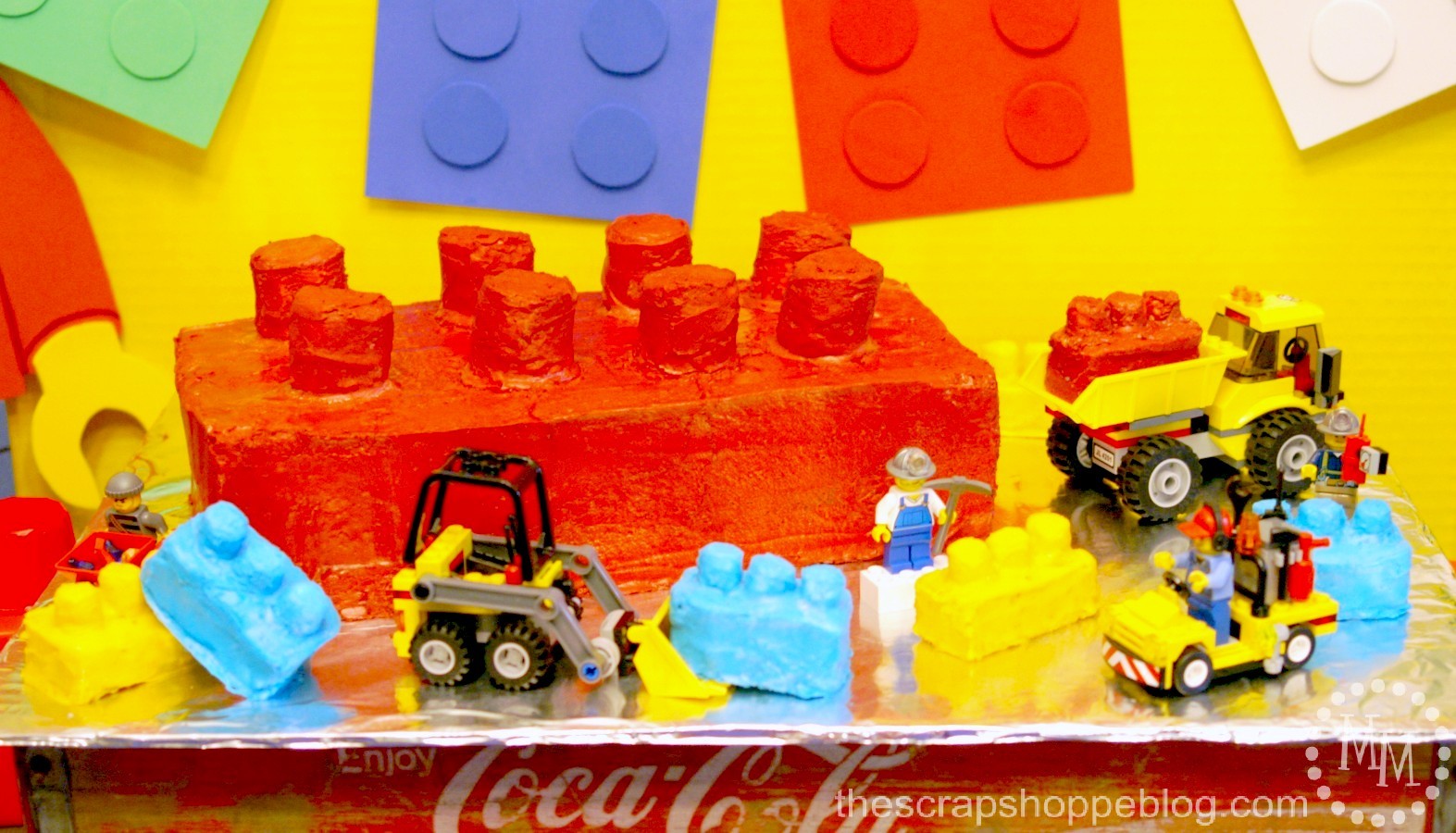 I’ve started putting together my cakes the day before the party.

It is SUCH a game changer!!

It feels SO nice to have the cake in the fridge and ready to be pulled out and put straight on the table on party day.

For this cake I made a red Lego brick out of pound cake and marshmallows.

The red icing is buttercream.

I set the scene with my son’s Lego City vehicles and characters to make it look like they had constructed the cake themselves.

I even had little Lego bricks made from pound cake and mini marshmallows! 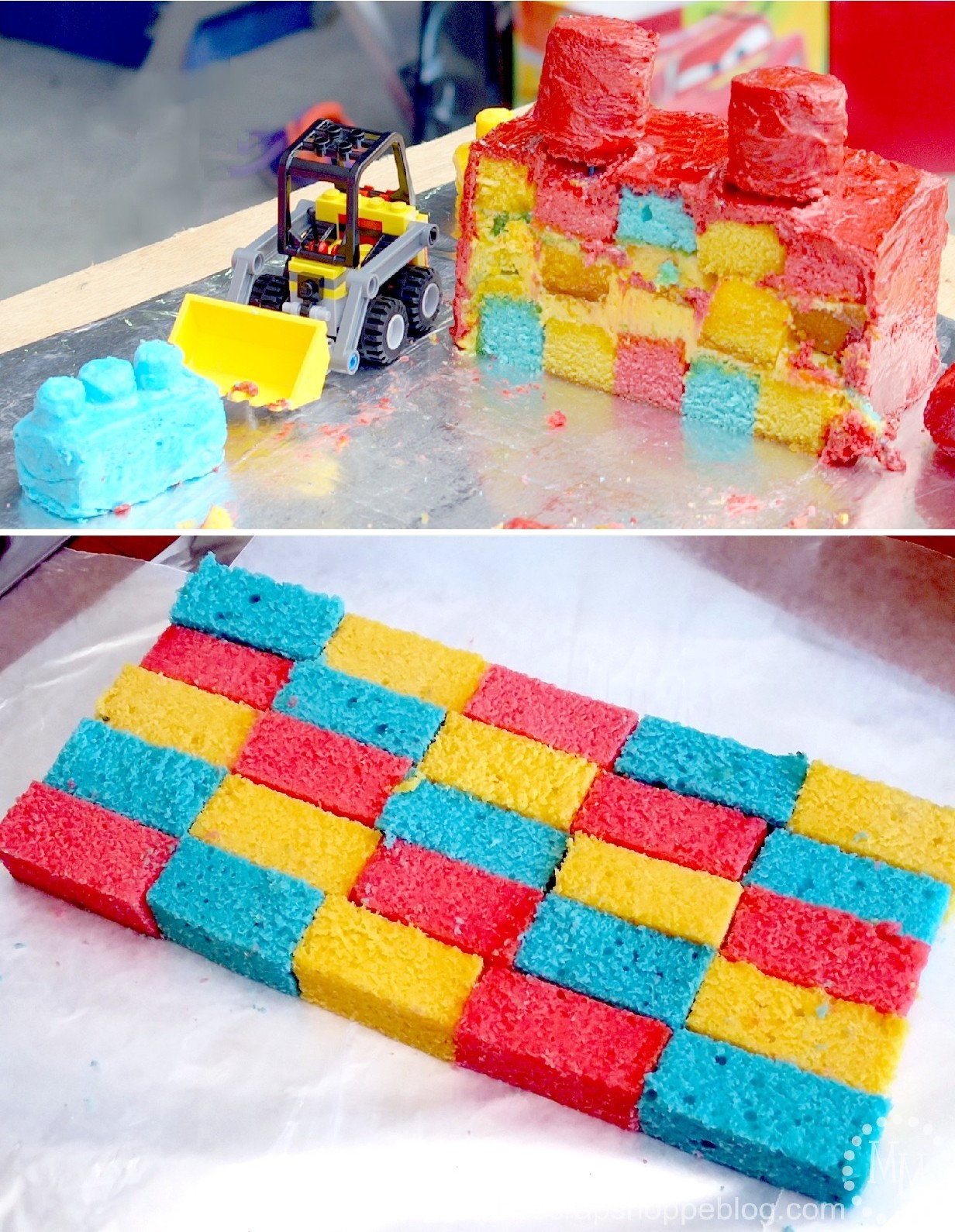 The cake itself was made up of 3 different pound cakes that had been colored yellow, red, and blue respectively.

I cut them into small rectangles then laid them out to form the cake.

The cake was 3 layers high with yellow buttercream icing between the layers.

It was a fun surprise as we cut into the cake to reveal the layers!!

It looked like the cake was made of Legos! 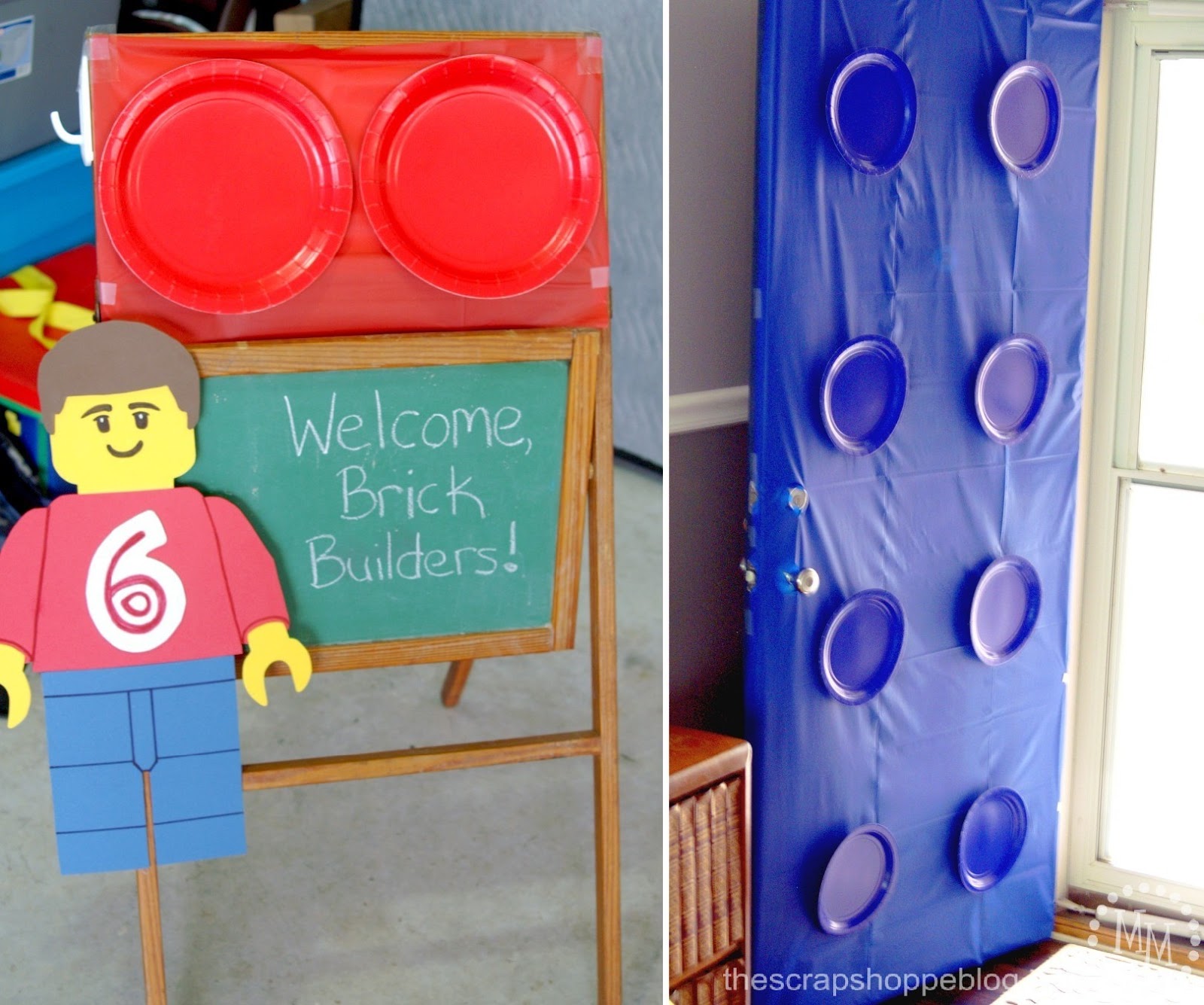 I used our old easel chalkboard to make a greeting for our little builders.

I had also made two large Lego minifigures for the party decor. More on them in a moment.

The best, an most inexpensive, Lego birthday party decor was on the front door and the party table backdrop.

I picked up a plastic tablecloth with a matching set of plates.

For the door, I trimmed the tablecloth to be the same size as the door and taped it on.

I then taped the plates to the door to look like a giant Lego.

SO easy, pretty inexpensive, and a big impact!

For the party table backdrop I did the same as with the door, trimming the tablecloth to fit the window and taping it down.

I saw this awesome technique when perusing ideas on Pinterest.

You can check out all of the fun things I found on this party board. 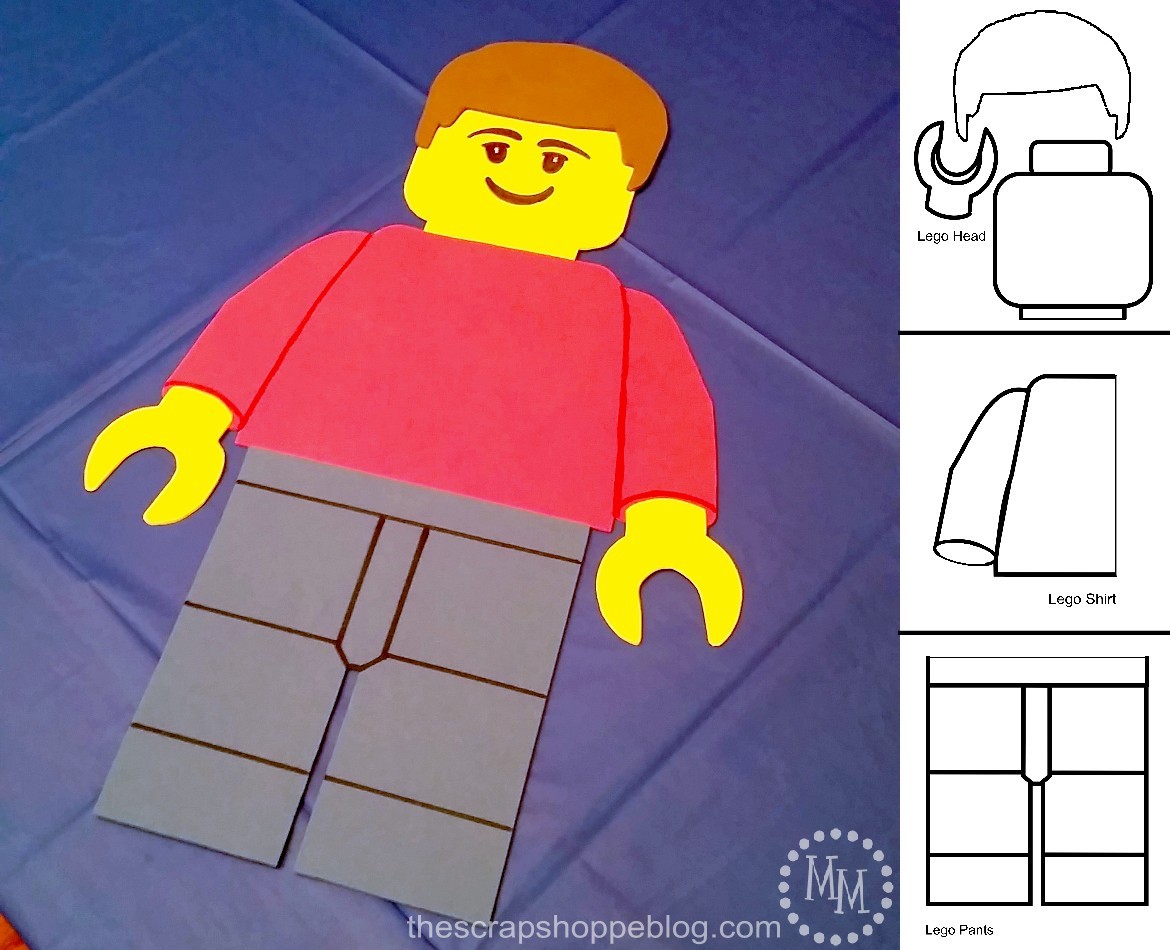 Back to the giant foam minifigure!

I bought oversized sheets of foam in red, blue, and yellow.

For the hair a regular 8.5×11 sheet of brown (or other hair color) will work.

I made a template (which I am sharing with you!) which you print on 3 sheets of paper.

Cut out the template and trace it onto the foam, cut it out, and tape/glue the pieces together.

The shirt is too large to fit on a regular piece of printed paper so you can print half then flip it over to trace the other half.

Draw the face, lines on the shirt and pants, and you’re done!

The Lego minifig will be just under 2 feet in length.

He matches perfectly with the minifigure on the birthday invitation!! 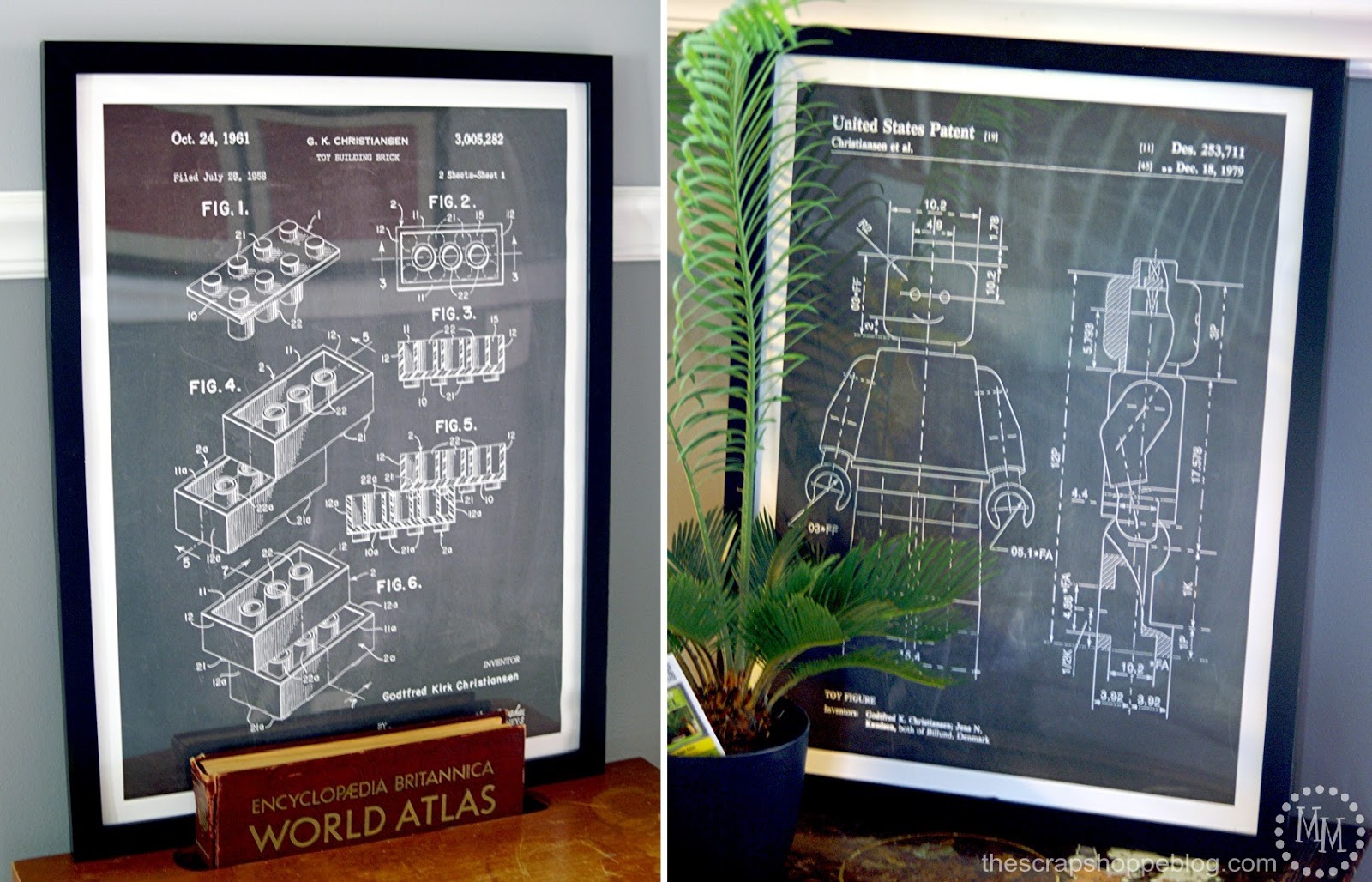 I found these awesome patent prints (affiliate link) and had to have them.

We’ll end up hanging them in the play room now that the party is over, but aren’t they amazing? 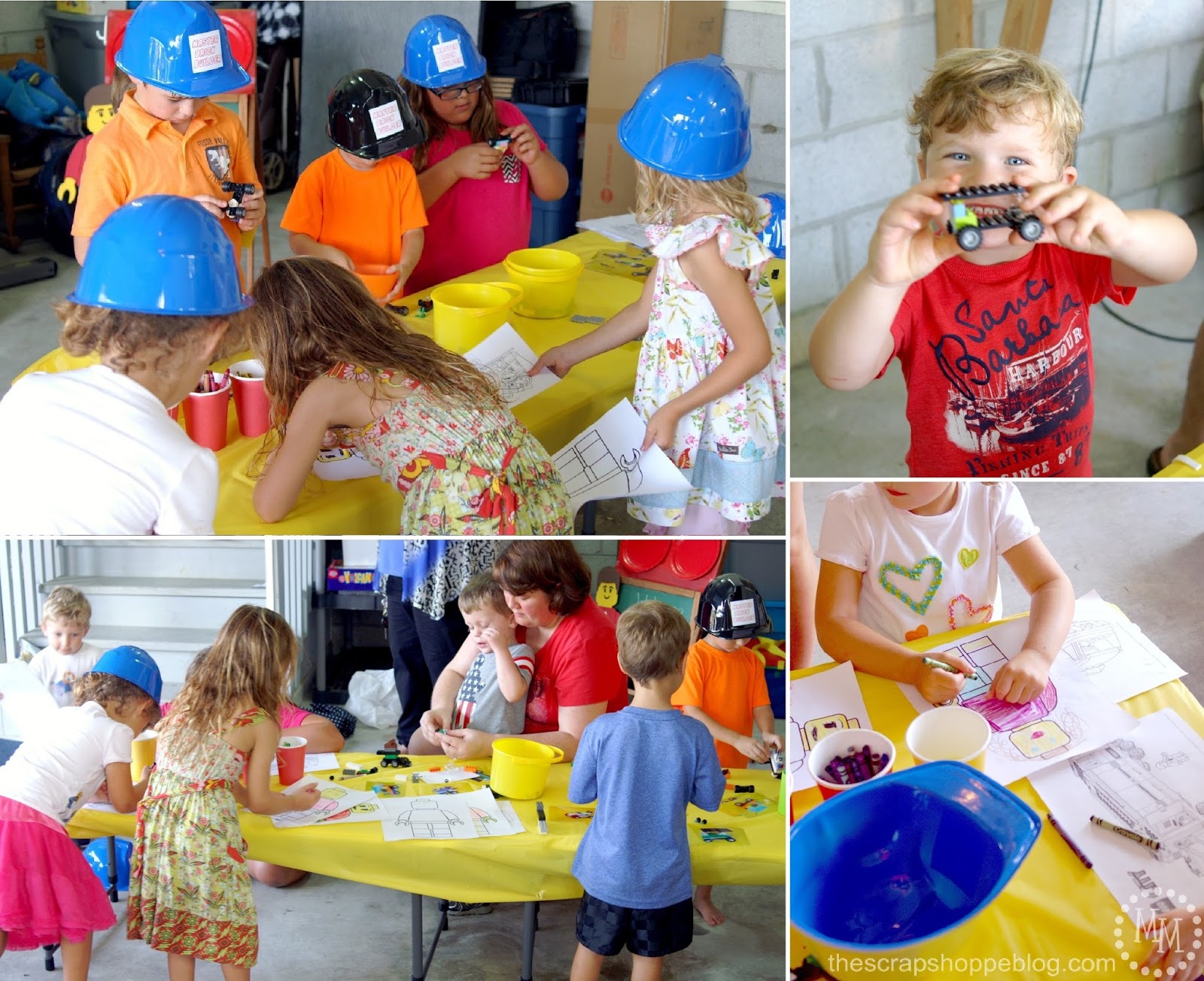 As far as activities for the kids, we went to the Lego store to pick up parts for all of the kids to make their own Lego cars.

We had made cars of them ahead of time and took photos of them (then took them all back apart, of course) and printed them out to scatter around the table for inspiration.

The Lego website has a TON of games and activities. I found some Lego City coloring pages and had them printed at my local copy store for the kids to color.

I also made a blank Lego minifigure and had it printed as well for the kids to color.

They really enjoyed that! They were super creative.

I had also purchased a bunch of plastic construction hats and made stickers for each that said Master Brick Builder. 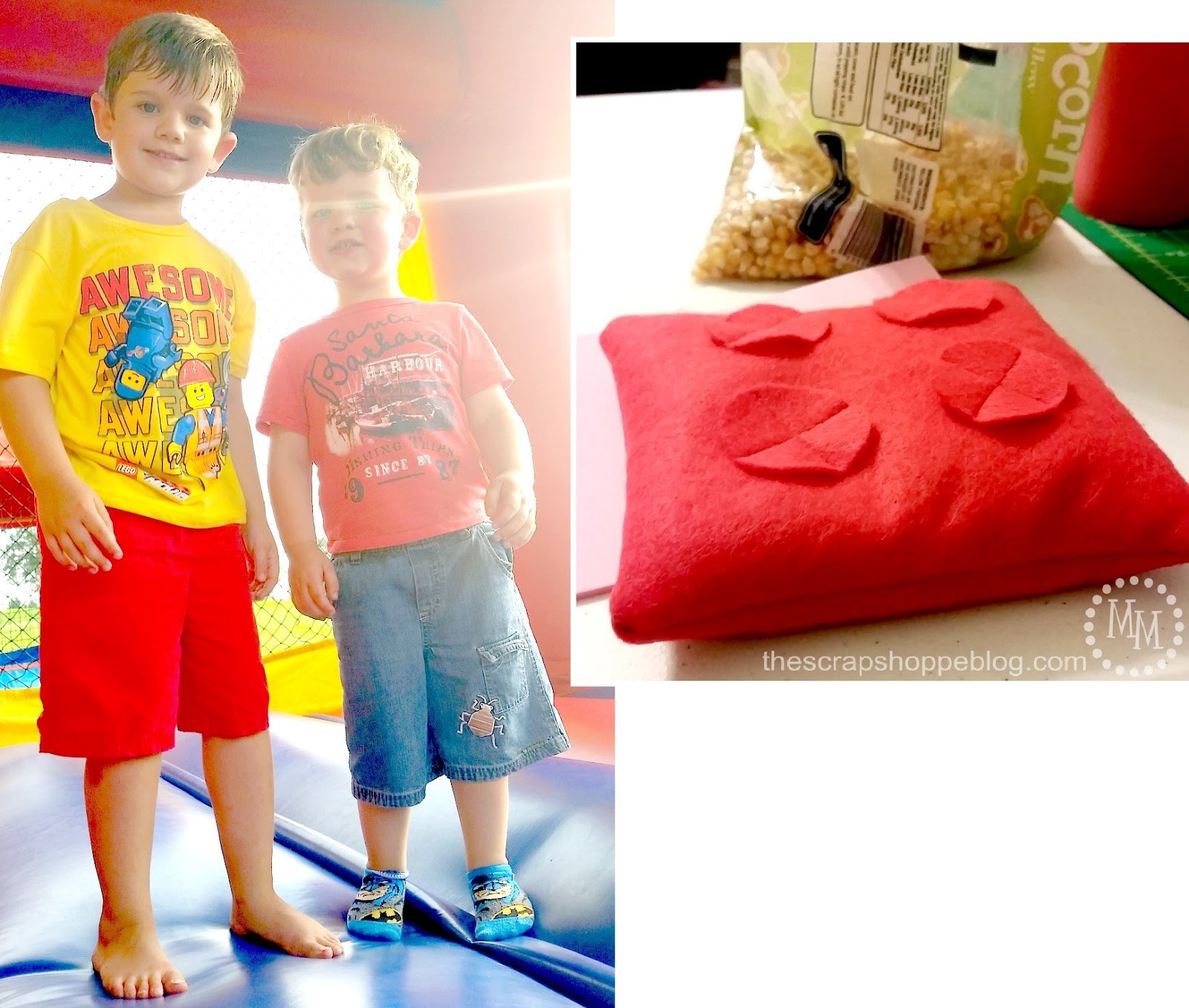 Once again we rented a couple of bounce houses for the party.

It’s such a great way to keep the kids entertained!

Not to mention wear them out.

We were even able to rent these off of Craiglist which kept the cost down, and we had them for 48 hours.

LOTS of extra play time for my two boys!

If so, you may have recognized several of the photos I’ve shared already.

Including this Lego bean bag!

I borrowed corn hole boards from my sis-in-law and made these Lego bean bags out of felt to use.

Great entertainment for the kids AND adults!

Also, I am no good at corn hole. 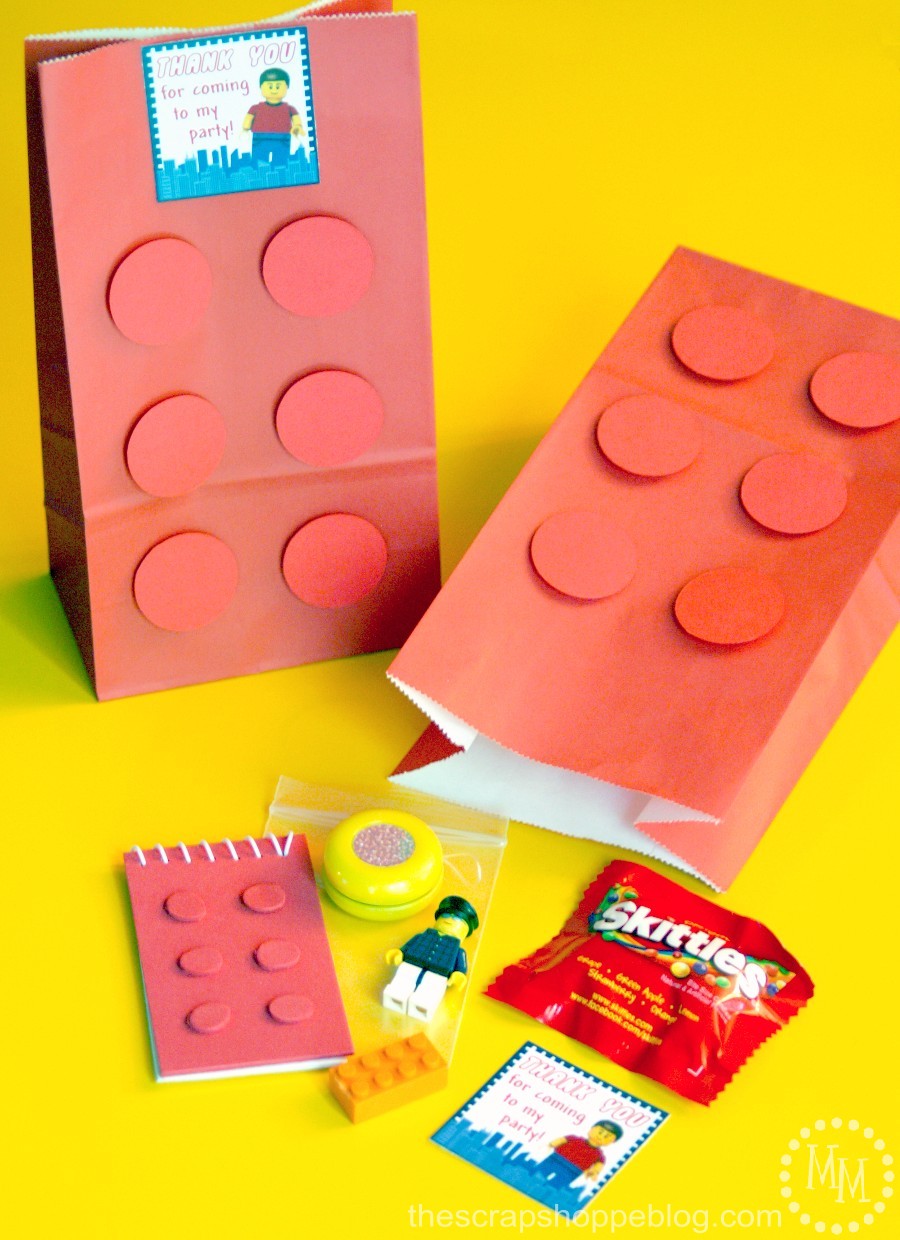 I used these red paper bags for the LEGO birthday party favors.

I cut circles out of red cardstock and used 3-D foam tape to adhere them to the bags.

The bags were filled with a yo-yo, Lego minifigure (purchased as a batch on Ebay), Skittles, Lego eraser (set of 4 for $.88 at Target!), and a notepad that I changed the cover to look like a Lego (more of those foam sheets!).

I made custom thank you tags to match the stationary and Lego invitation. 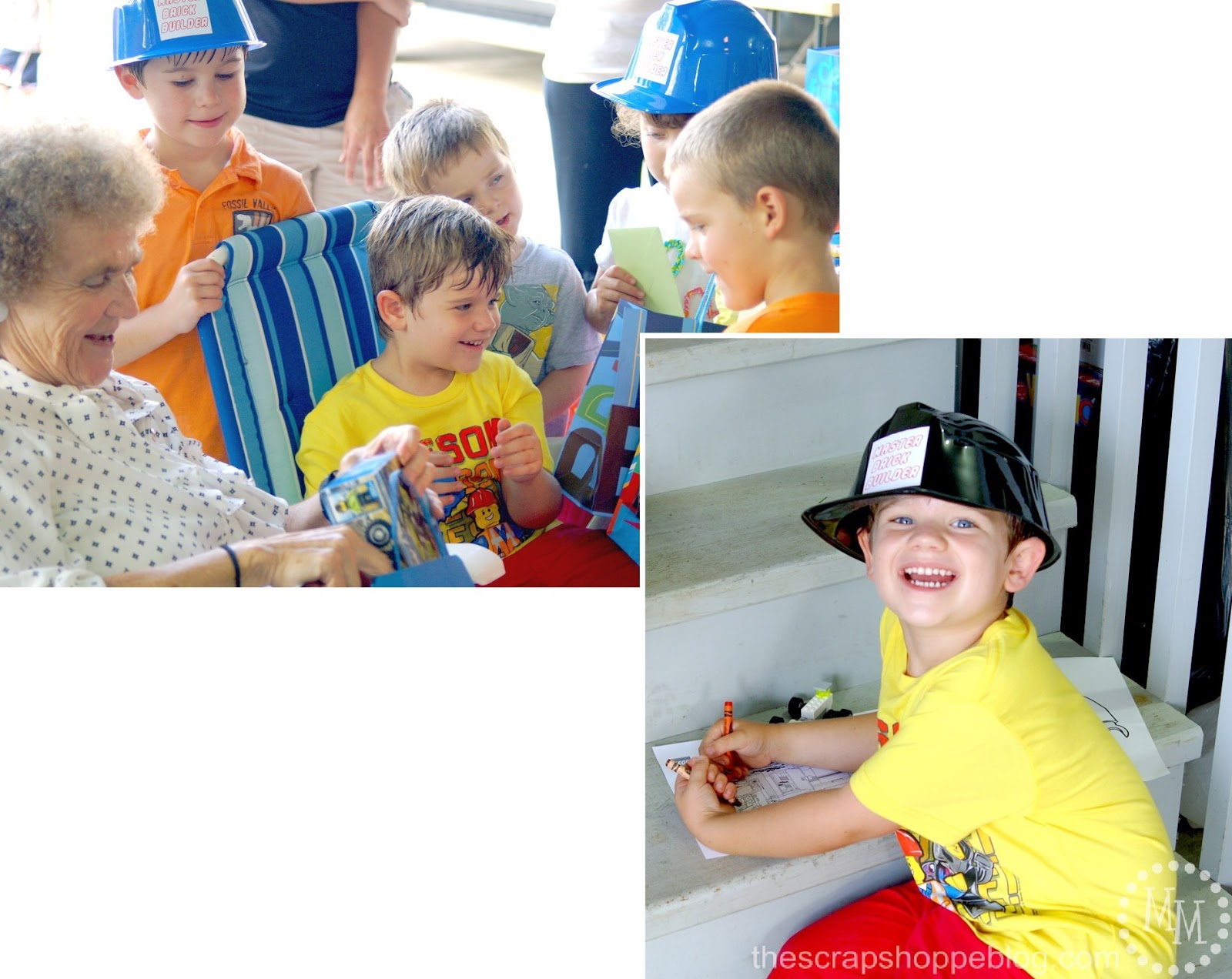 I was so proud of my birthday boy!

He was super gracious to all of his guests.

And I think that smile says it all!!

I am one happy mama that he is this happy.

And a big thank you to all of the amazing family members who always help me make these parties a success! You know who you are!

I can't seem to find the print sheets for the Lego minifigure.... Can you please share them? I'm preparing for a 6 & 2 year old joined Lego party.

The program I use to share the files can be particular with some web browsers (firewall issues). Please try using Chrome or Firefox if you are able.

looks amazing!! We just threw a lego party last weekend too! i love the wall decor with the colored plates and those LEGO prints are amazing too!! Very fun party!!

How super fun!! Love all the details you put into the decorations and party!! Awesome job!!

Michele, this is so super fun! :) I love the attention to detail and all the activities that you included. Kason's birthday is coming up, and I'm definitely going to use a corn hole game for the adults! So thoughtful! :)

Oh my gosh how fun!! I love every bit of it. You put so much detail into your parties!! The cake is super great and I love the way you used the foam sheets to make all the bricks. And I cannot believe you embossed the napkins. You are a rock star!!!! Looks like such a super fun day. ;)