Skip to Content
If you missed my guest post during Flower Week at Singing Three Little Birds, here’s the lowdown! 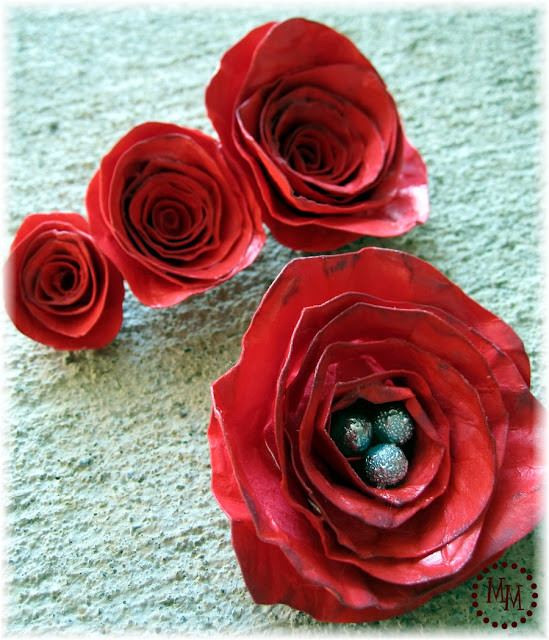 These rolled roses originally started out as plain red cardstock. Now they have an almost ceramic look to them. Let me show you how I made them! 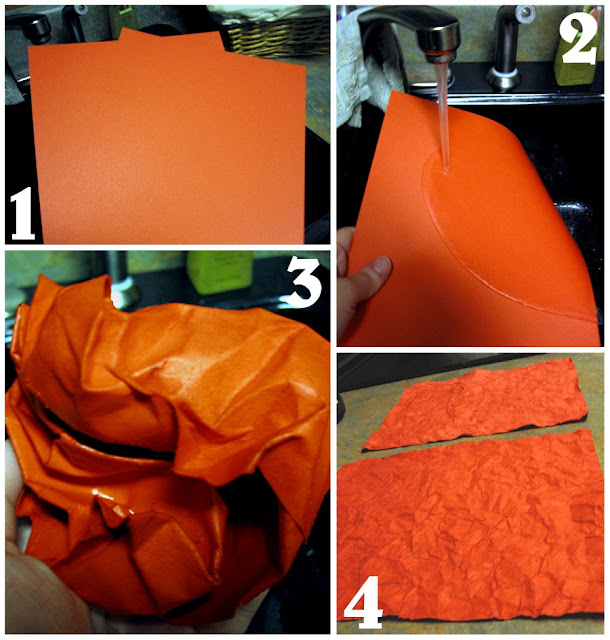 1. Start with a couple of pieces of cardstock (I only ended up needing one for all of these flowers, but I grabbed a 2nd piece just to be sure).

2. Soak the cardstock, one sheet at a time, under running water. Be sure and wet both sides of the cardstock.
3. Wad each piece of cardstock up into a ball. You’re going to want it very rumpled so you will need to wad it up, open it, and wad it up again several times. Just be careful that you don’t rip the paper.
4. Lay the cardstock out flat and allow it to dry. I soaked mine before going to bed and let it dry on the kitchen counter overnight. If you’re slightly more impatient you can take a hairdryer to it.
From here I tried two different techniques to get the “ceramic” look for the roses. Here is the technique for the single rose. 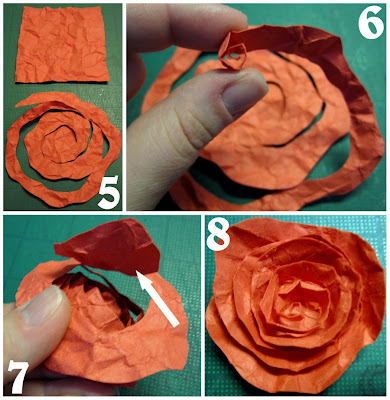 5. From a roughly 5″x5″ square of the dried cardstock, cut out a circle. From the circle cut out a spiral. I like to cut my spirals in a wavy fashion to give the final rose a more realistic look.
6. Start with the outermost part of the spiral and start rolling it between your fingers. Contine you to roll until you get to the center of the spiral.
7. Take the center of the spiral and use some adhesive to glue the base to the rest of the rose so it acts as the base of your flower.
8. A pretty little rose! 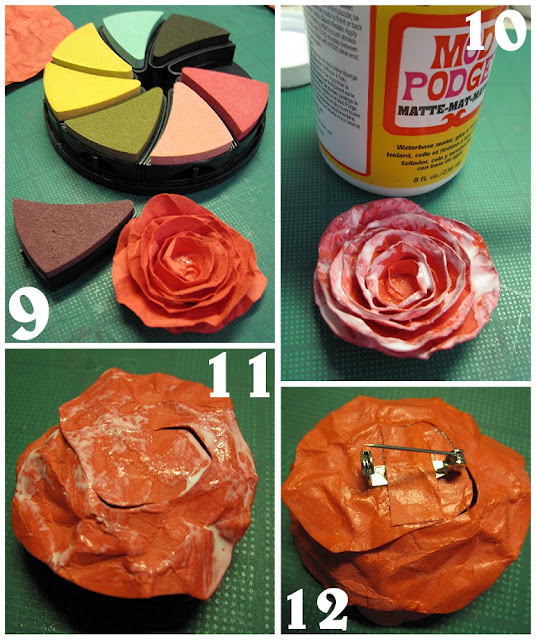 9. Ink the edges of the rose with a contrasting color. This just makes the rose more realistic so its not uniform in color. You can skip this step if you would rather.
10. Apply a somewhat thick coat of Mod Podge to the rose with a sponge brush. Not too thick though! If its too thick the glue with dry white instead of clear (especially between the petals).
11. Turn the rose over after the front dries and appy more Mod Podge to the back of the rose.
12. Apply a pin, bobby pin, clip, or whatever you like to the back of the rose. 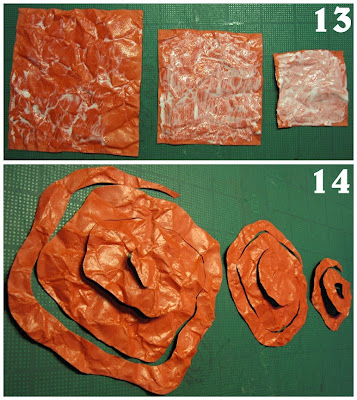 Note: This starts the 2nd “ceramic” technique. (I think I actually like this one better.)
13. Cut three different size squares from the wrinkled cardstock. Apply Mod Podge to each square. Once the front dries, flip it over and apply again to the back.
14. Cut out spirals as before. 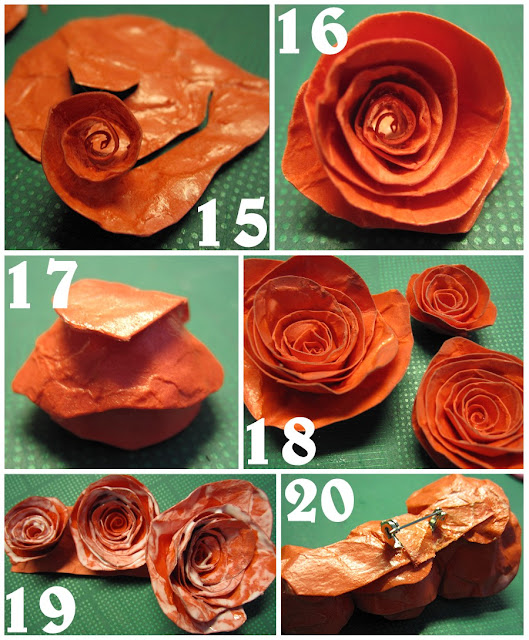 15. Once again, start with the outside of the spiral and start rolling the rose.
16. The roses for this set of 3 flowers are more tightly rolled so they can be placed snugly next to one another.
17. Glue the back of the roses as before.
18. Ink the roses at this step if you are so inclined.
19. Apply another coat of Mod Podge just to get the flowers nice and shiny!
20. Line the 3 flowers up in a row and adhere a strip of the red cardstock to the back of the flowers. Apply a small amount of adhesive between each flower to glue them to each other also just to be sure there is no flopping around. Add a pin, bobby pin, or whatever suits your fancy. 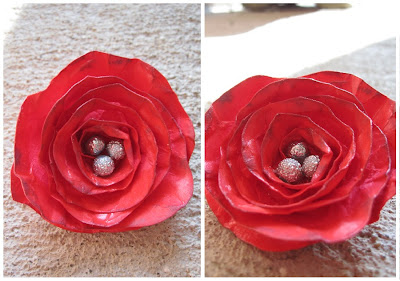 The final single rose. I glued some large silver beads to the center. 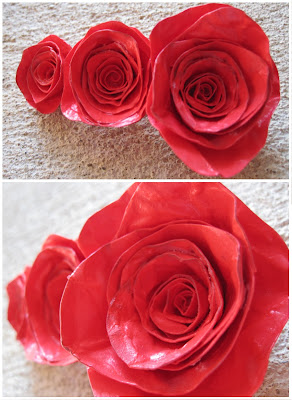 The final set of 3 roses. I didn’t add anything to the center of them since they are wrapped so tightly. And I think they look just as good without the extra embellishment.
Its may be difficult to tell from the photos, but these roses have a great shine to them. And the Mod Podge also makes them very stiff so they also almost feel like they could be ceramic. The wrinkled paper and the waviness of the spiral really give them a realistic look!
So, what to do with these fun new flowers?
Well, since they are pinbacks I can add them to any outfit as a brooch, put them on a belt, add them to a headband… 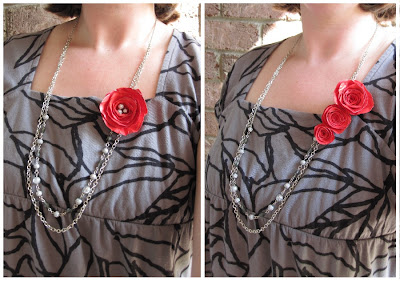 Or thread them through the chain of my DIY go-to necklace! I’m loving this look!
Other than the time it took the cardstock and Mod Podge to dry (which was really only a few minutes), this was a pretty quick project.

Just what I was looking for to add to my dressing room decor! Thank you so much!

Just STUNNING Sounds and Looks like a Can-Do for Me Will Wet My Cardstock in a Few and give this a Try in The Morning.Thank You so much for this Tutorial.....

Love your flowers, I'm definitely going to try this. Thanks for sharing :0)

You're brilliant Michele! Thanks so much!

What a lovely and innovative way to make flowers from paper....I will be sure to add them to the Handmade Flower Directory so that more people can share your creativity.