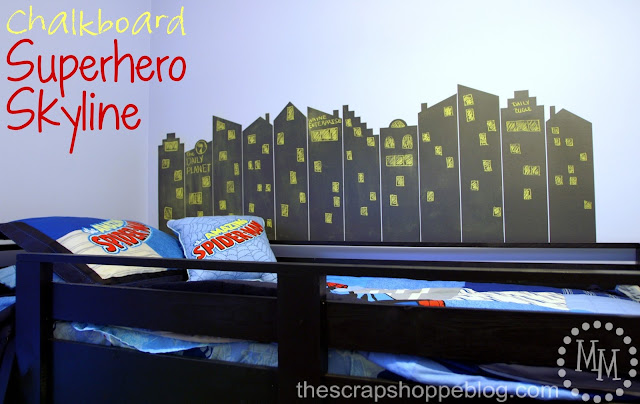 My 4 year old’s firetruck room is in the midst of an upgrade. He officially got a big boy bed a month ago, and we’ve been slowly redoing the decor to match his new favorite thing: superheroes!

You can definitely expect more superhero projects in the future and, hopefully in the next couple of months, a final reveal! 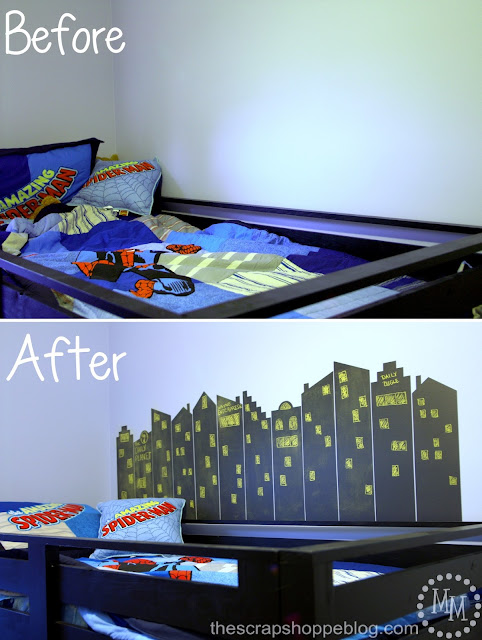 His new bed is a loft bed so decorating the space where he sleeps is a bit of a challenge. Its up high and the walls are seriously boring to look at. To make it more interesting I decided to make a silhouetted city skyline as you would expect to see in any superhero comic strip as a piece of “artwork” for this space!

Let me show how I made it… 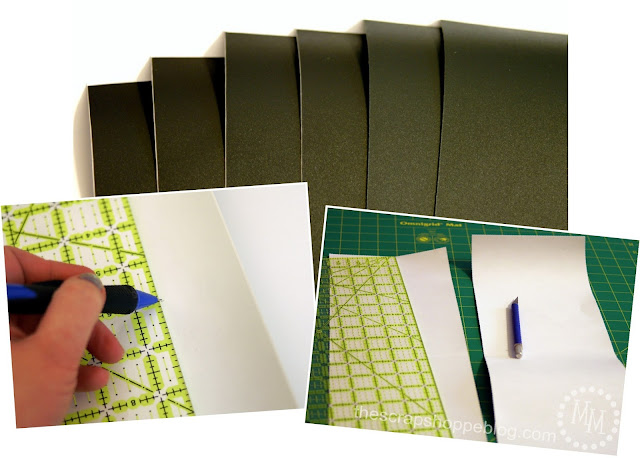 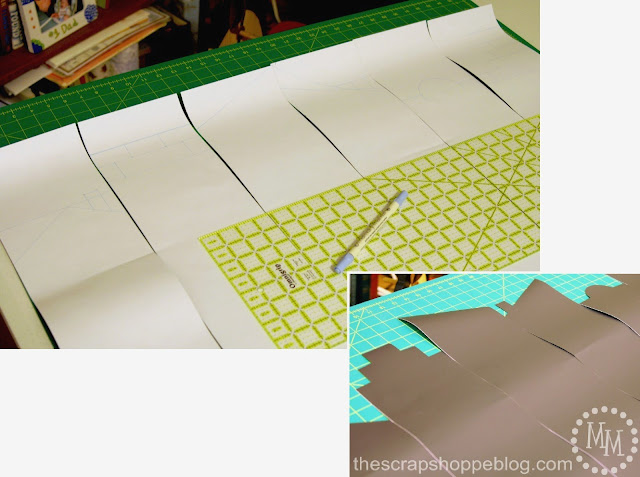 On the back of the vinyl you can draw out your skyline that you will be cutting out.

In my opinion, this is the hardest part of this project: just trying to come up with 12 different building roofs!

You want to make the buildings in varying heights so that each one stands out and doesn’t blend in with its neighbors. Use an X-acto knife to carefully cut out the tops of the buildings. 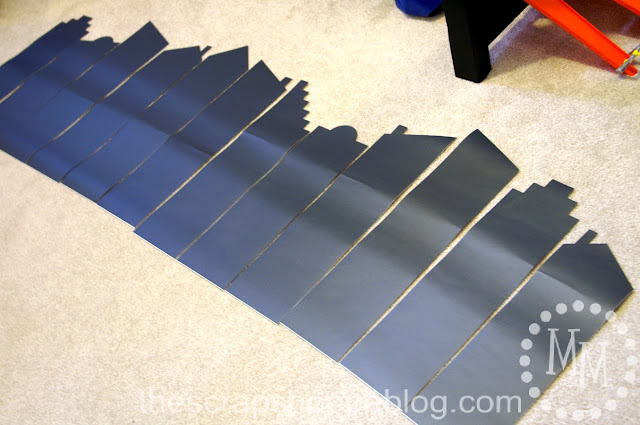 I laid all of the buildings out on the floor so I could decide what order I wanted them to be in, then I stacked them on top of each other from left to right (since I would be starting on the left side of the wall) so I knew exactly which building to use next as I worked. 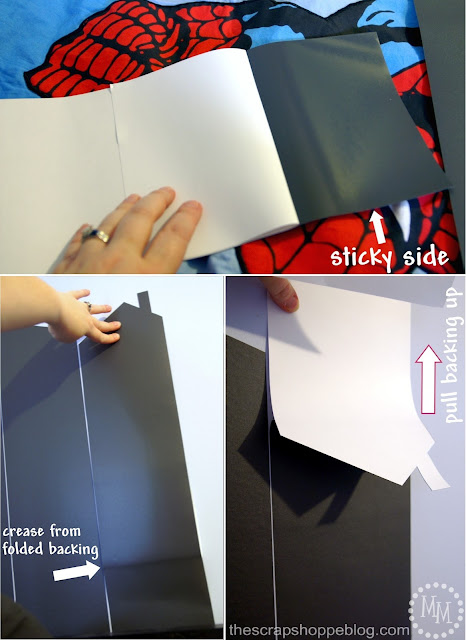 I had a super simple method for getting these long pieces of vinyl on the wall. No transfer paper was necessary!

1. Lay down the vinyl sheet on a flat surface back side up. Carefully pull back the paper backing ~4 inches from the bottom of the building and crease the paper so that the sticky side of the vinyl is exposed.

2. Carefully place the bottom part of the vinyl sheet (the exposed sticky part) up to the wall and hold the building upright, lining it up where you want it to go. Press the vinyl against the wall so that the 4″ of exposed vinyl sticks to the wall.

3. Reach behind the vinyl sheet and grasp the paper backing that you folded up and slowly pull it up the wall, smoothing the vinyl against the wall as you go. 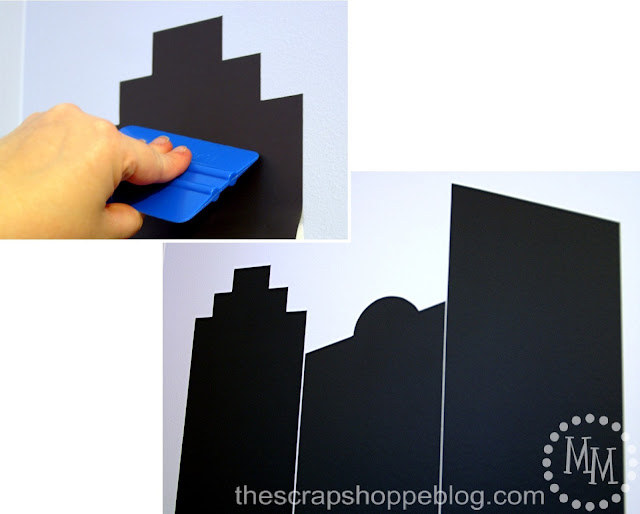 Take something flat such as a credit card to smooth out the vinyl so there are no bubbles and it is stuck well to the wall.

Continue on with all of the buildings. You can see I spaced my buildings about a quarter of an inch apart so that each one stood out. 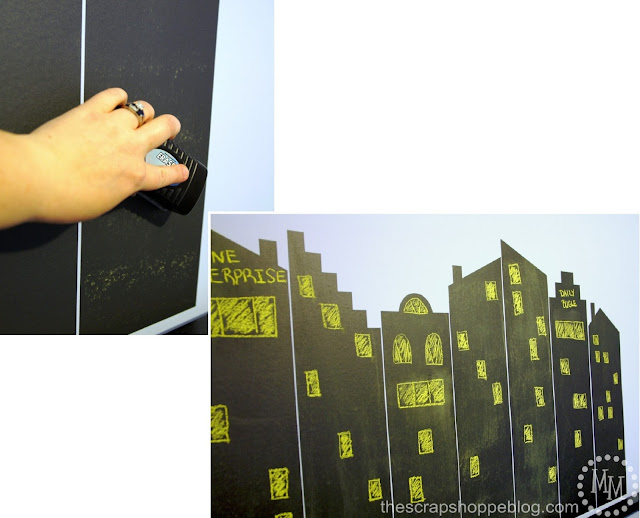 Before using any chalkboard you first need to prime it, and the same goes for chalkboard vinyl. After rubbing chalk all over the vinyl then wiping it back off with an eraser, it was time to draw on the windows!

I used yellow chalk for a nighttime look on my buildings and drew on the windows haphazardly as not all of the windows would be lit up at night. 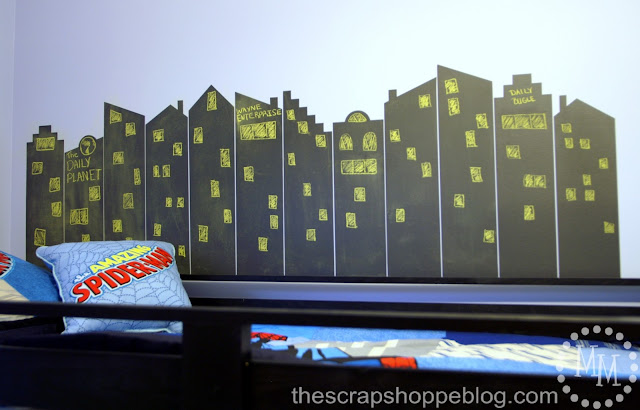 I also designated 3 of the buildings as the workplaces of my son’s 3 favorite superheroes: Superman (The Daily Planet), Batman (Wayne Enterprise), and Spider-Man (Daily Bugle). 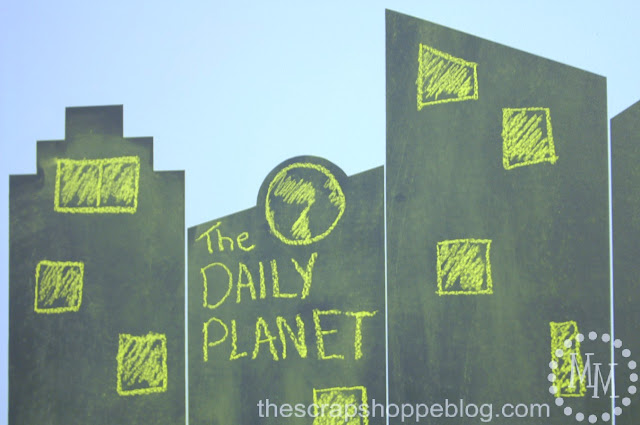 I did choose to go with old fashioned chalk instead of a chalk pen. I think it gives this “artwork” a more youthful feeling. Though my son has been warned not to touch it too much so the windows don’t smear. He’s a good boy and listens pretty well so I think this will last for a while. 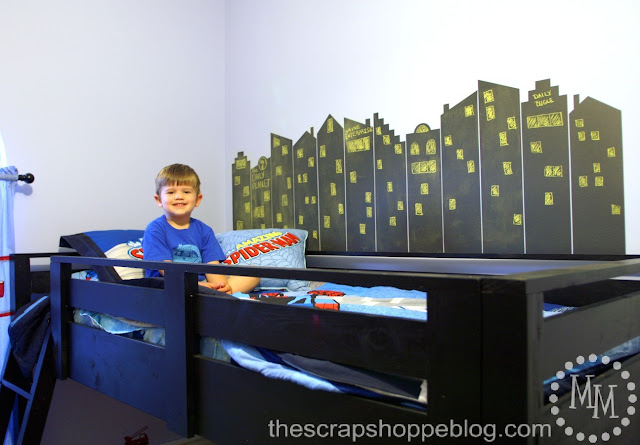 I think he likes it! And its a great start to getting some fun things up on the wall for him.

Very fun idea! My youngest is a superhero fan, too. He'd love something like this. Go Spiderman!

Amazing! My 7 year old would love this :)

What a great idea for a little boy. My son also just got a loft bed and I was thinking about his wall being boring next to his bed. Love this idea. Thanks for sharing at Merry Monday.

I have to show this to my daughter. They just bought a new home and my 4-year old grandson is a super hero fanatic. He would love to have something like this in his new room. Pinned for inspiration :)

Michele, that is so fun! What a great detail for a superhero room!