Glow in the Dark Water Balloons is the perfect summertime game after the sun goes down! 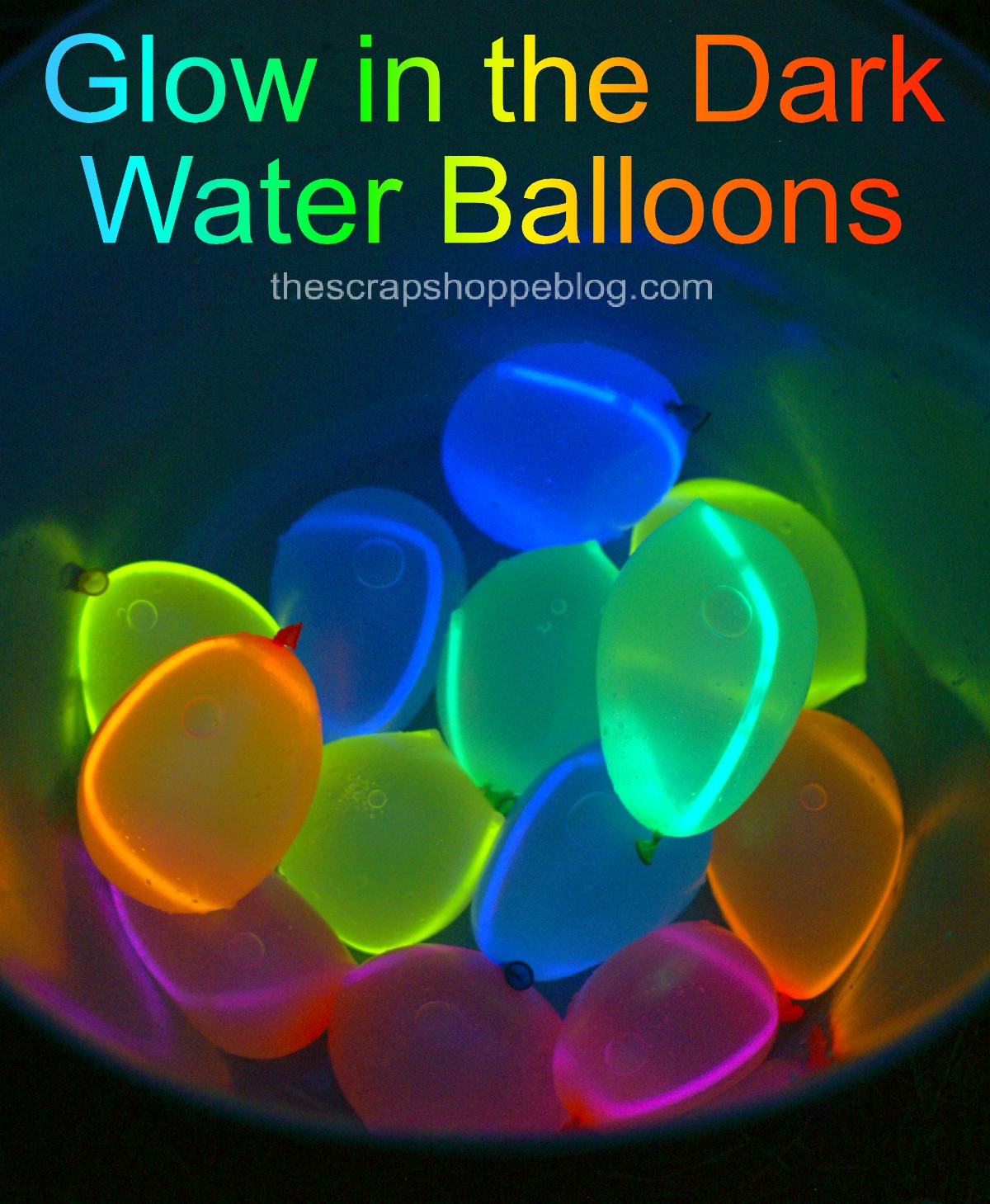 Are you ready for the be all-end all of outdoor entertainment after dark?

I don’t know about where you live, but here in TN it’s still pretty hot and humid out even after the sun goes down from June-August.

A water balloon fight would not be an unwelcome event!

But, a water balloon fight in the dark? The logistics aren’t really there.

But how about a glow in the dark water balloon fight?? Yes!

How is everyone seeing each other?

Well, the water balloons in hand obviously, but also you would ideally be playing right at dusk, when you can just make out the other people in the yard. 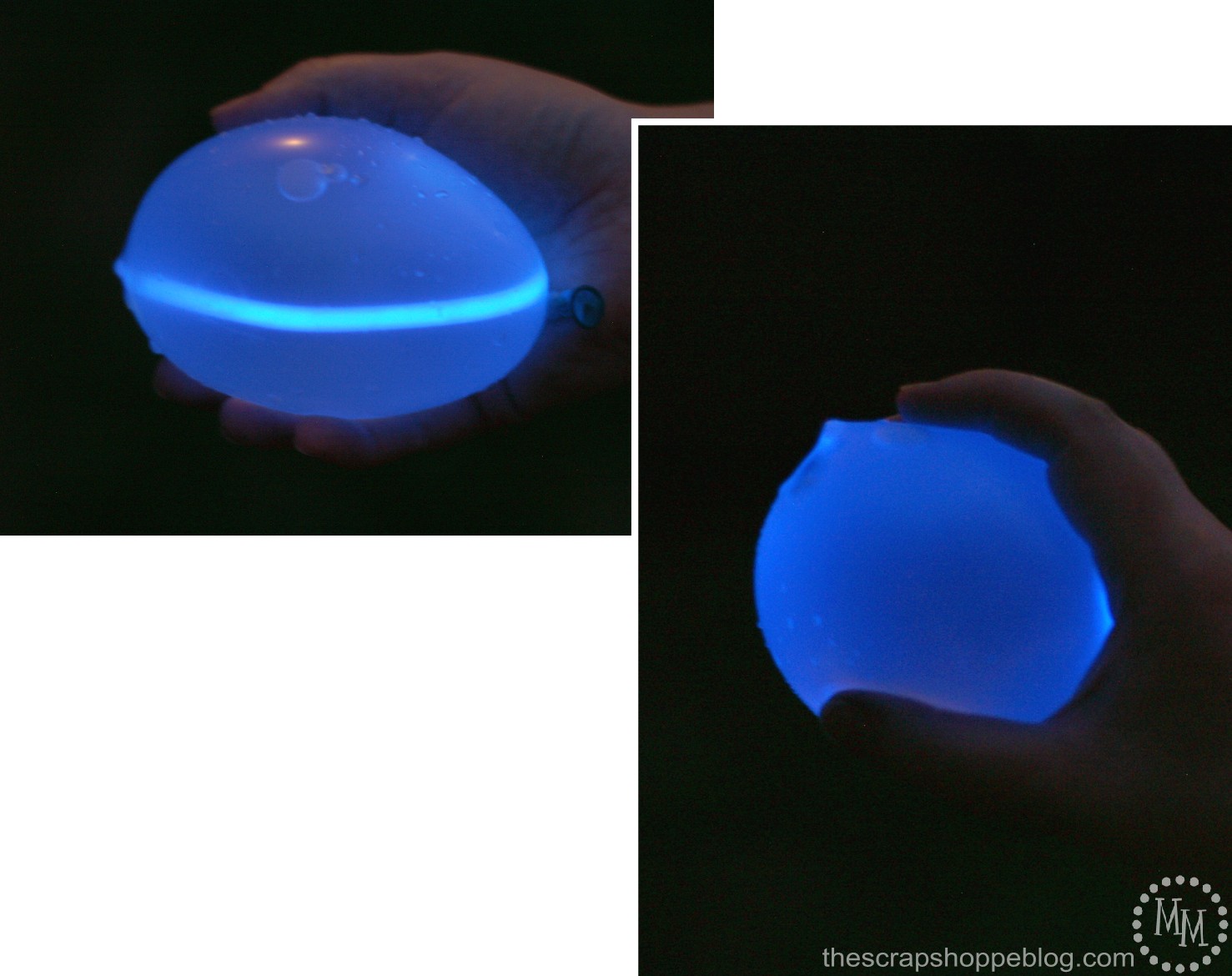 Let me start off with a few precautions…

1. Be sure the glow sticks you purchase state that they are non-toxic.

2. Glow sticks should be placed in the water balloons by an adult. There is a chance it could crack and the chemicals inside could leak out. If you have the non-toxic sticks you will be fine, but be sure to rinse any of the chemicals off the skin as soon as possible.

3. Do not break open the glow sticks to pour the solution into a water balloon. There is glass inside that could cut you and puncture the balloon. Not a wise idea.

Note: Accidentally cracking a glow stick will not result in you getting cut by the glass inside. Most likely the crack that forms will only be large enough for the liquids inside to leak out.

To get the kids involved in at least part of the preparation I let them light up all of the glow sticks we were going to use.

It keeps their hands busy.

As they light them up, you can begin putting them in the water balloons.

Both the water balloons and glow sticks can be found at the dollar store. You can’t beat summer fun that only costs a few dollars!

2. Pull the balloon completely over one end of the glow stick.

3. Continue to roll the balloon down over the glow stick.

Adding the glow sticks to the balloons may take some trial and error, but eventually you will get comfortable with the process and really start knocking them out!

If a glow stick does happen to crack, toss it in the trash and move on to the next one. 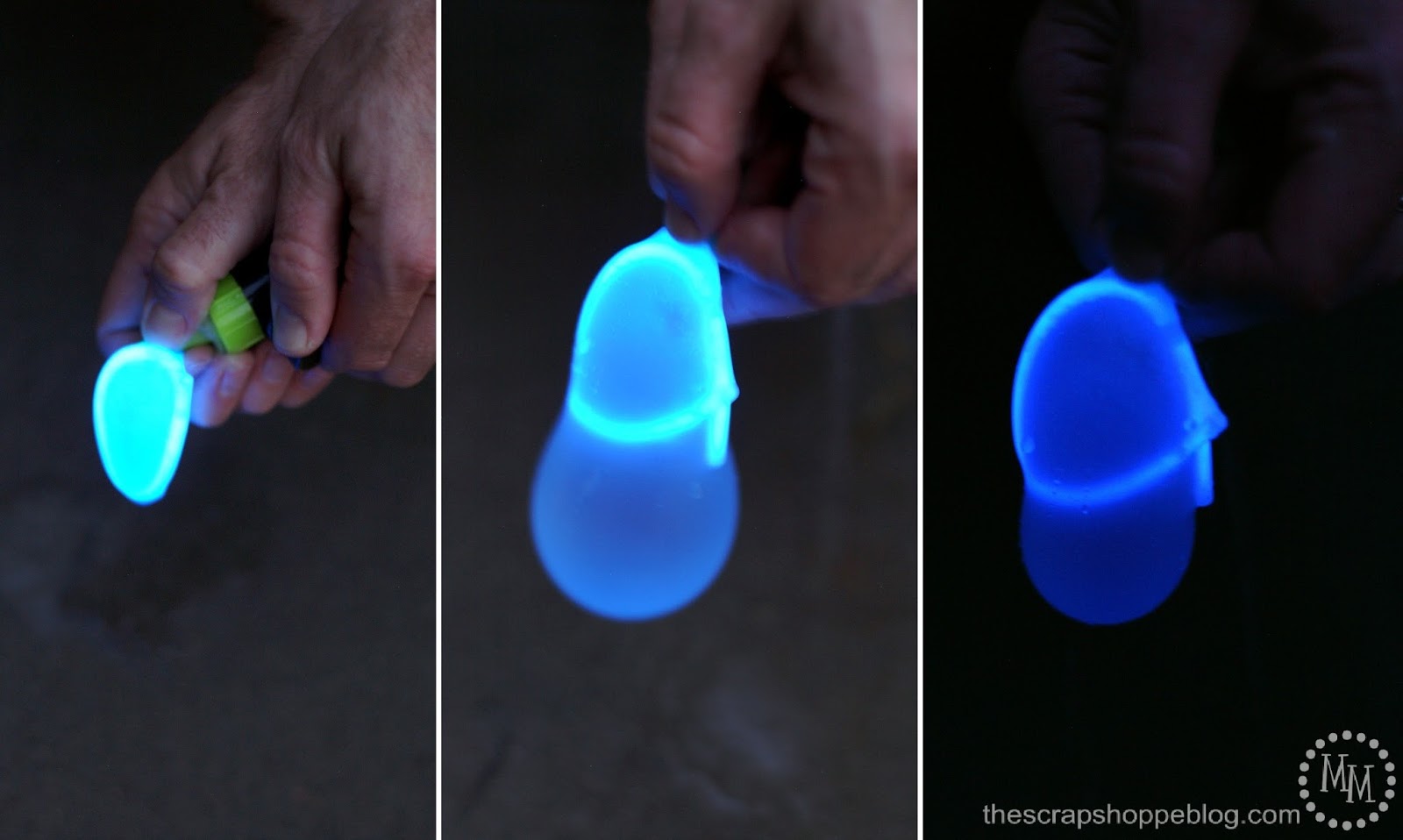 The water balloons should come with a little plastic nozzle you can place over the end of your hose.

Use it to slowly fill up the balloons.

The glow sticks may poke and protrude inside the balloons, but they should not cause them to pop. 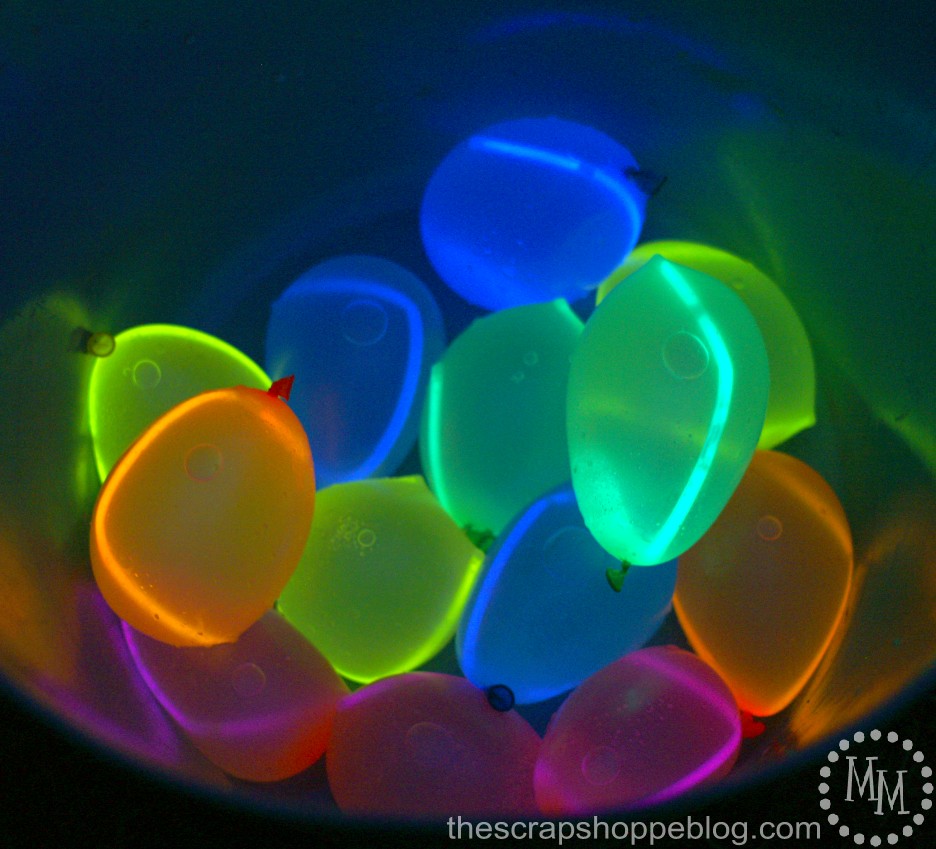 Continue to fill up those balloons and pretty soon you will have a bucket full of fun!

You can see we match glow stick colors with the balloons colors. 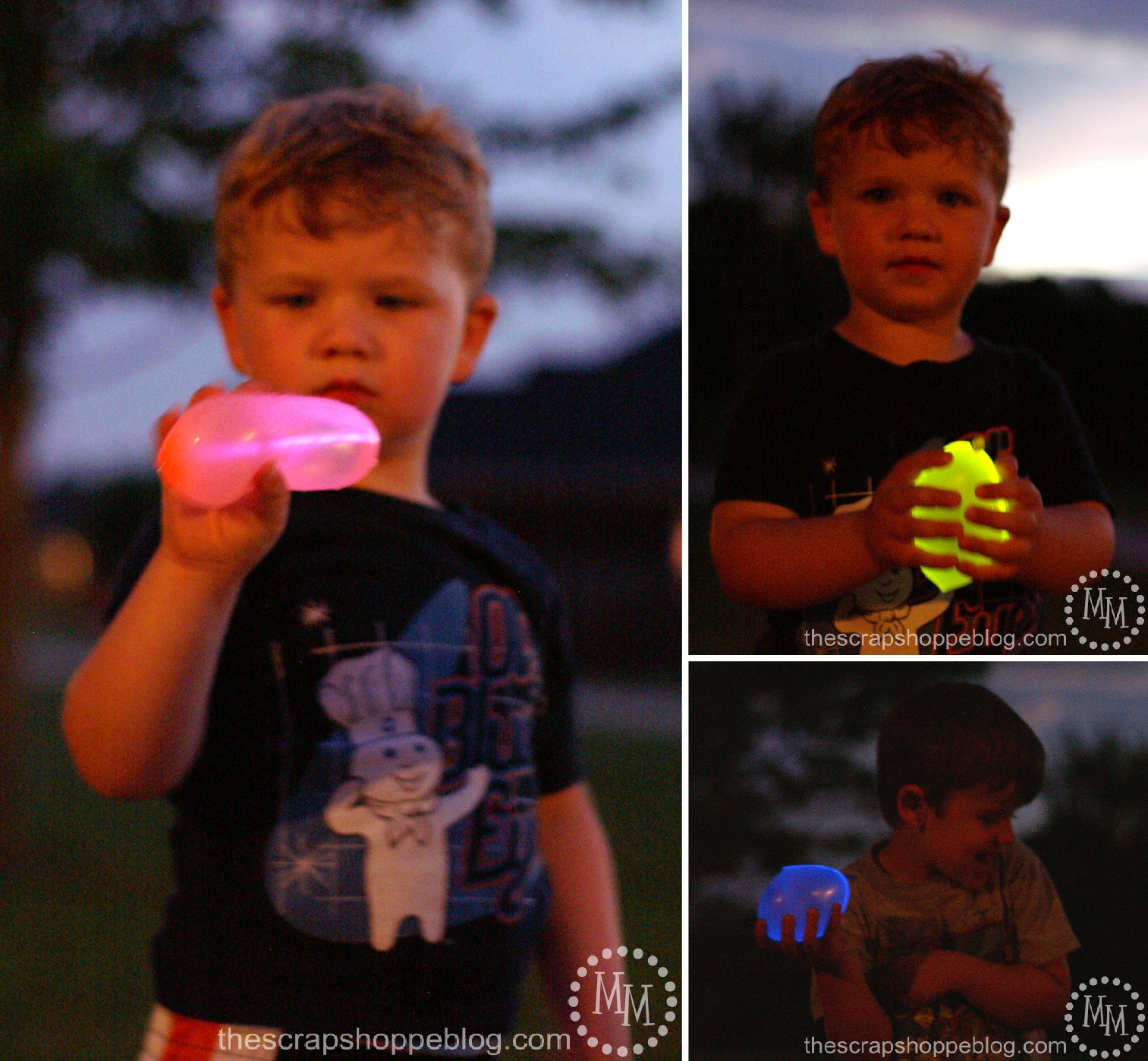 My little guys had so much fun throwing these glow in the dark water balloons at each other!

And afterwards, they had a lot of fun glow sticks to play with in the dark.

Congratulations, Michele! Your post will be featured this week at the Weekend Blog Hop at My Flagstaff Home! --Jennifer

Oh my gosh, who would have thought? This is such a great idea. Thanks for inspiring us at the Weekend Blog Hop at My Flagstaff Home. --Jennifer

Wow! We have teens, not littles, but I have a feeling they'd have a blast with this idea!

Thanks for the inspiration!

Awesome idea for family night fun! Thanks for sharing at #HomeMattersParty

So fun! I have done this with plastic eggs and hid them for fun in the summer - will have to try this one too. Thanks for sharing on To Grandma's House We Go!