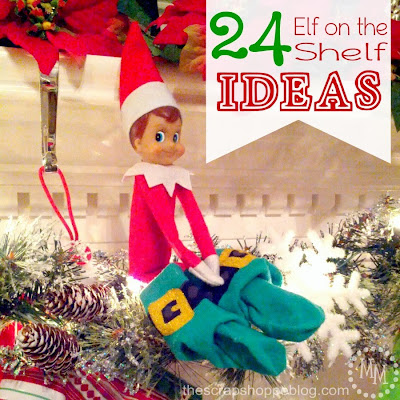 Do you celebrate the holidays with your little ones using the popular Elf on the Shelf?
We started the tradition last year with our boys. Our youngest didn’t really “get it” yet so we focused it mostly on our oldest who was 4 at the time. I shared each day of Elf on the Shelf (starting on December 1 and finishing on December 24) last year on Instagram. I plan on doing it again this year so follow along if you want more ideas!
And, call me a bad parent, but we definitely used the Elf to keep the boys’ behavior in check because, really, it can get a little crazy around the holidays. There is just so much to be excited about!
Here is a compilation of all of last year’s ideas, including what to do if your child has a naughty day and doesn’t follow the rules of the Elf! 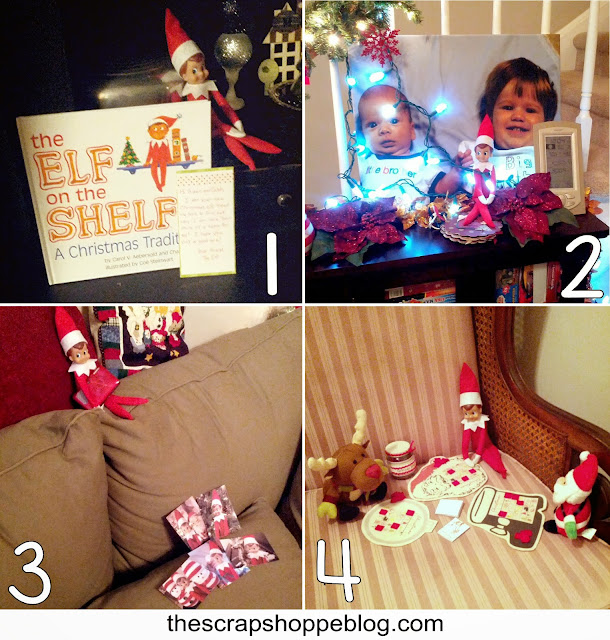 1. On December 1st we introduced the Elf to our boys, read his story, and had them select name for him.
2. Our mischievous elf got ahold of a strand of Christmas lights and strung them about randomly.
3. Mac (our Elf) took some selfies with some of our Christmas figurines and left the photos for the boys.
4. It was on like Donkey Kong with a rousing game of Christmas Bingo between Mac, Rudolf, and Santa. 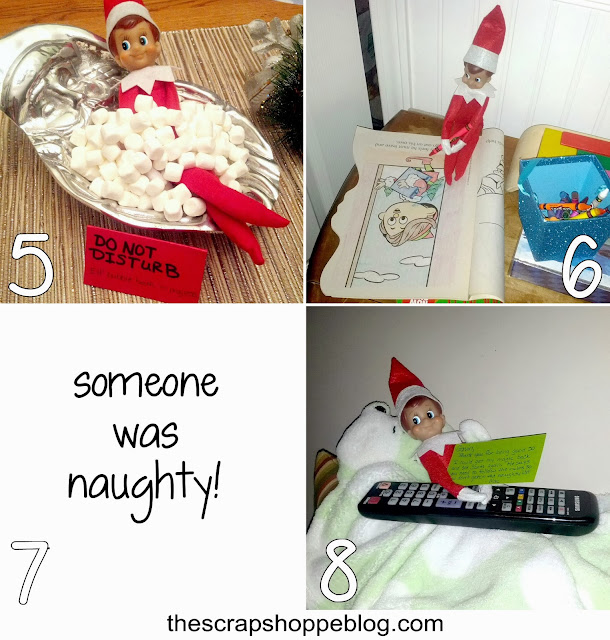 5. Its Elf bubble bath time! In a tub of mini marshmallows of course.
6. Mac colored a picture in our Rudolf coloring book for the boys.
7. My oldest didn’t follow the rules and touched Mac which made him lose his magic. He did not change positions this night because he was unable to go visit Santa while the boys slept.
8. Mac got his magic back and left the boys a note thanking them for being good so he could visit Santa again. This also happened to be a Saturday so he had the remote ready for Saturday morning cartoons. 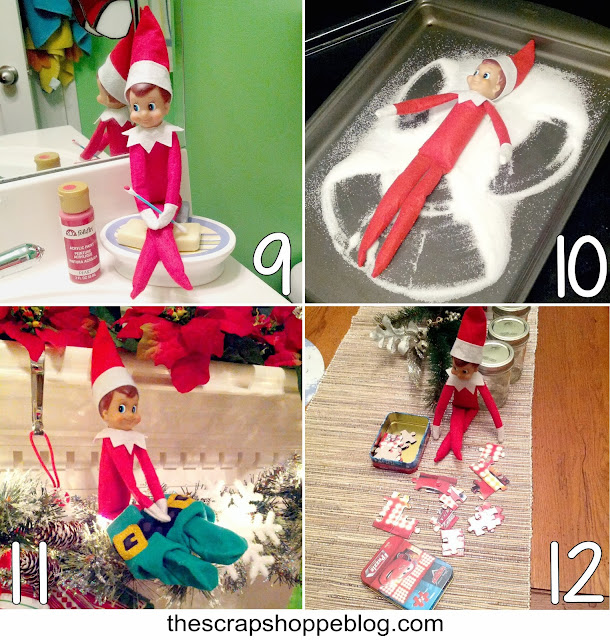 9. This day was tricky. Mac colored each boy’s nose red using acrylic paint while they slept. He waited for them in the bathroom so they could look in the mirror and figure out what had happened.
10. Snow angels is sugar!
11. Mac stole a pair of the boys’ socks and wore them while sitting on the garland on the mantel.
Don’t they look elfish? They are actually leprechaun socks!
12. Mac started working on one of the boys’ puzzles. 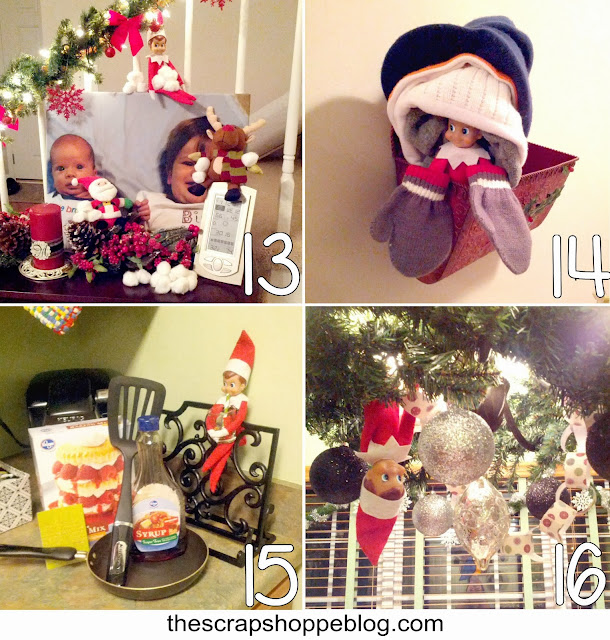 13. Mac put together a snowball fight with some of his friends using cotton balls.
14. Mac took all of the boys’ winter hats and some gloves and put them on. He’s hanging out in our Christmas card bin.
15. Mac put together all of the things needed for a pancake breakfast. And he’s drinking syrup in a small glass with a straw!
16. Mac made some paper garland and hung it from a light fixture and decided to hang out with it. 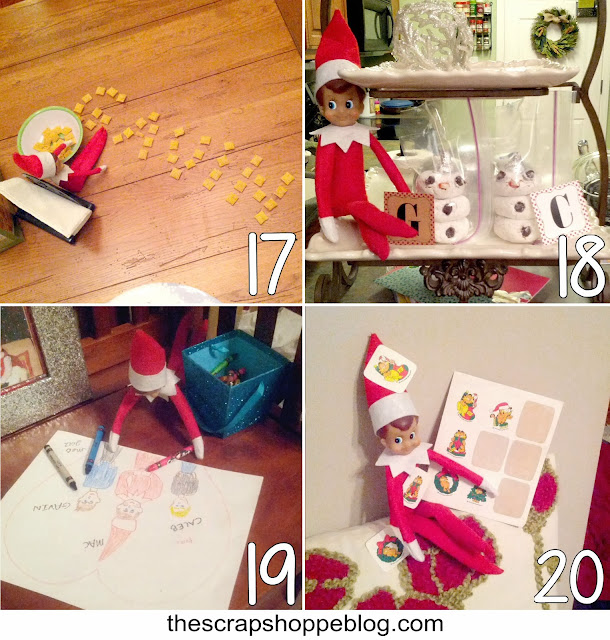 17. Using their favorite cereal, Mac spelled out the boys’ names on the kitchen table.
18. Mac made a special treat for the boys! Donut snowmen.
19. Mac colored a self portrait of himself and the boys.
20. Mac got ahold of some Christmas stickers and got a little crazy with them. 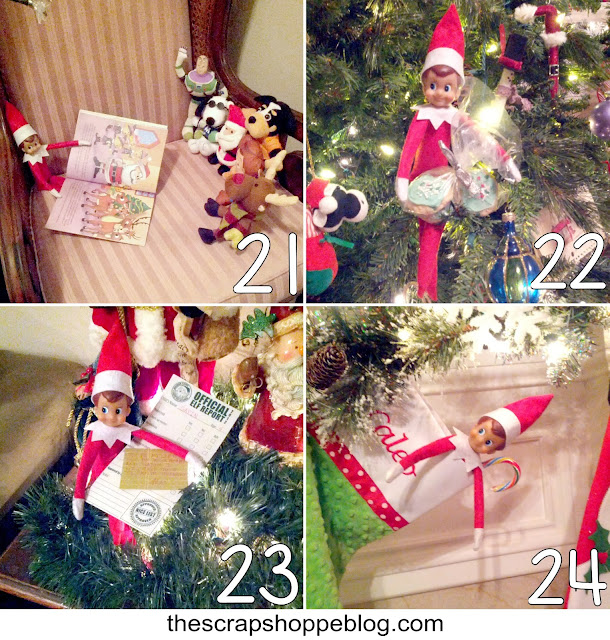 21. Mac read a Christmas story to all of his friends.
22. Special treat! Mac hid in the Christmas tree with Christmas cookies for each boy.
23. Mac brought mommy and daddy Elf Reports to fill out and be returned to him the next day. He took them to Santa so he would know how the boys have been doing.
24. Mac left the boys candy canes in their stocking for his last night in the house before returning to the North Pole until the next year.
Check out my Pinterest board dedicated to Elf on the Shelf ideas!
I would love to hear your Elf ideas. I’ll need a whole new set for this year so be sure to follow me on Instagram!
And to keep up with what your Elf is doing, download my December calendar.
This was a lifesaver for me last year! I filled the entire 24 days out in one fell swoop so I would know what to do with our Elf each night.
Linking up to Flamingo Toes, Today’s Creative Blog, The Shabby Creek Cottage, Tidymom, Whipperberry,
My Repurposed Life, 30 Days, Tatertots & Jello, Serenity Now, and other great parties found on my party page.