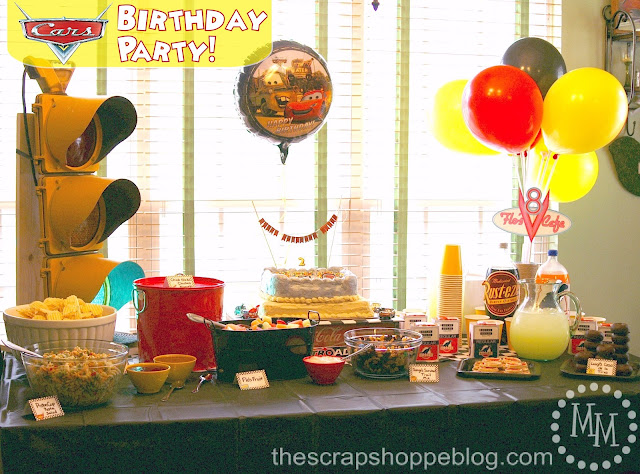 We had so much fun with the Cars birthday party for my 2 year old!
And I’m pretty sure my little guy was over the moon for it.
Though I’m not sure he realized the party was really for him until we sang Happy Birthday.
He looked a little surprised when we sang his name!
So, let’s get this party started with some details!
This post is picture heavy but, hey, aren’t those the best kind of party posts? 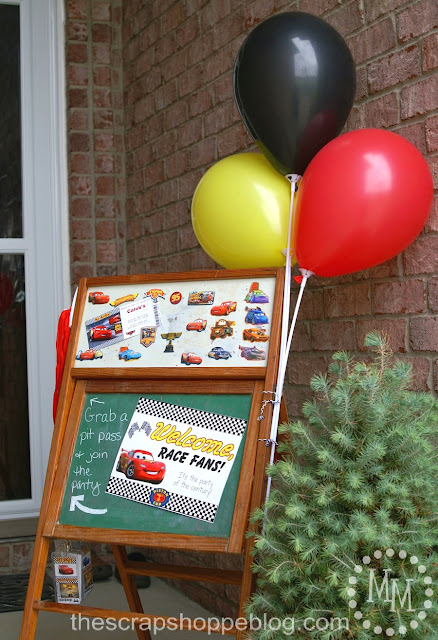 When ours guests came up the front walk they were greeted by my boys’ chalkboard easel that had been party prepped with a welcome sign, a copy of the Cars birthday invitation ticket, and a note to grab a pit pass before they entered the house. 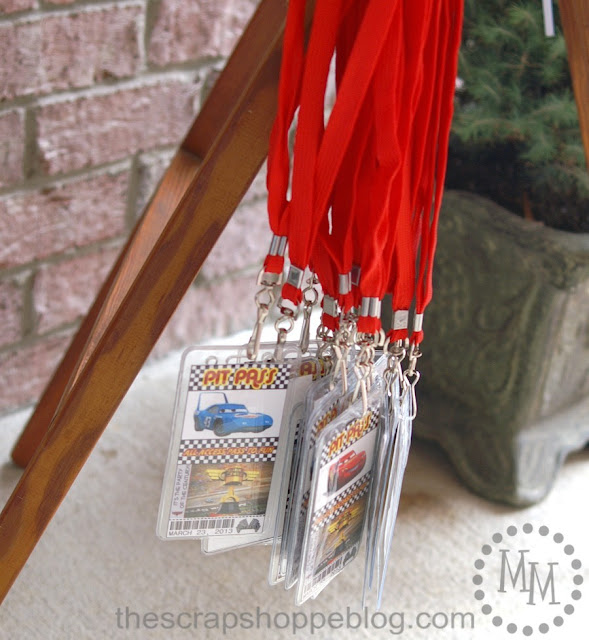 I love, love, love these pit passes!
They were so much fun to make and really rounded out the party by getting everyone to participate in wearing them. They featured Lightning McQueen, The King, and Chick Hicks.
The kids loved them! 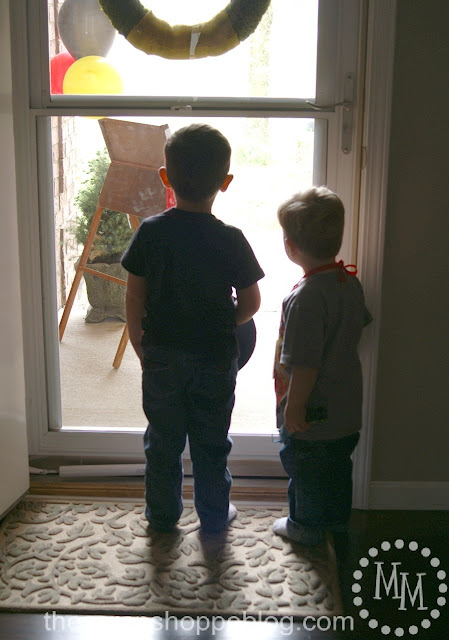 My boys on the lookout for their guests! 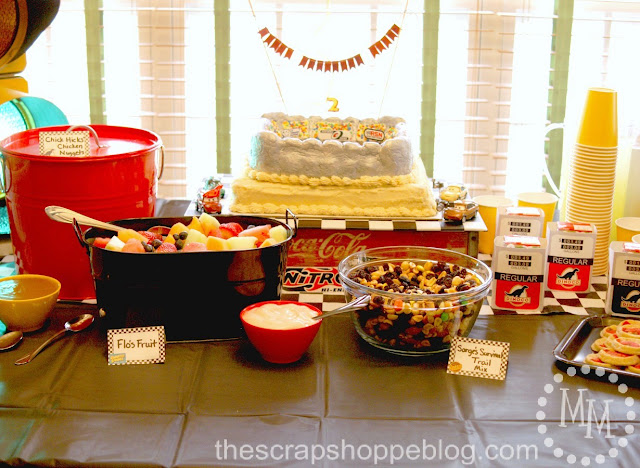 Let’s move on to the main exhibit: The food table!
Of course front and center was the birthday cake. To give it some height, I set it on an old Coke crate and a rectangular cardboard cake base I had wrapped in some black and white checkered vinyl I found in the remnants at Hobby Lobby. More on the cake itself in just a minute.
The cake was surrounded by lots of fun foods for lunch. And I made a lot of fun printables to help me accessorize! 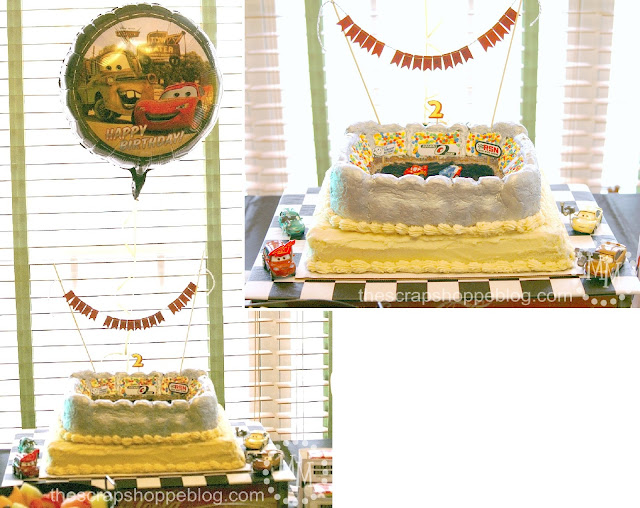 The Cars cake.
Quite possibly my favorite cake to date!
And I finished it the day before the party (typically I am finishing the cake as my guests arrive!)!
Can I get a W00T! W00T!
I was brainstorming cake ideas with my coworker and thought about making a stadium cake for a racetrack.
Lo and behold, my coworker had a stadium cake pan!
This Nordic Ware Pro Cast Stadium Pan

to be exact. Perfecto!
The base of the cake is two layers of rectangular cake. I’m a fan of box cake mixes so I went with a funfetti cake.
The icing on the rectangular cake is this amazing vanilla buttercream icing from Whipperbery.
It did take 2.5 batches to completely cover the cake and do the decorative edges, but it was completely worth it!
I made all 3 cakes (2 rectangular and the stadium cake) a couple of days before the party then wrapped them tightly in Saran wrap and kept them in the fridge.
This made icing them much simpler!
I chickened out a bit with the stadium cake and used store bought icing. I was afraid of spreading the thick buttercream over all of those curves and crannies!
I iced the outside of the stadium and the top of the turrets then I really had some fun…

I spray painted the cake!
I found this Wilton Silver Color Mist at my Hobby Lobby and decided it would be perfect to color the stadium!

It took about a can and a half to get a good coating on the cake, and let me just tell you, all of the guests were amazed by it! They thought the stadium was not really cake. What a fun surprise! 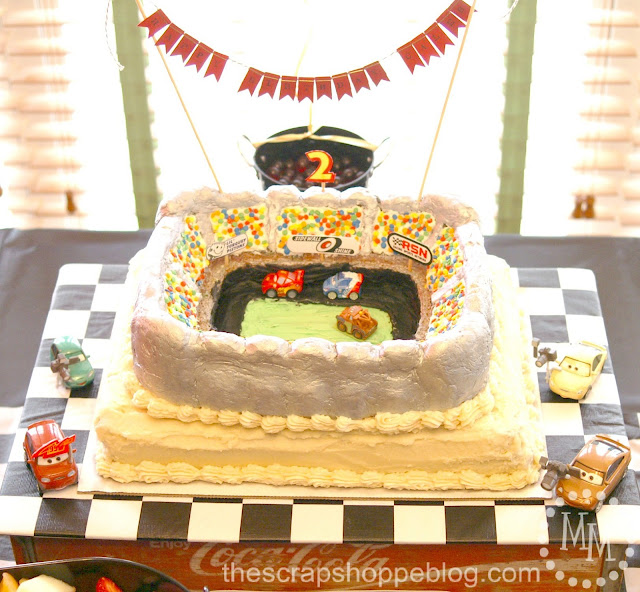 To complete the stadium look I used sprinkles in the stands as the race onlookers and used black and green icing to make the race track and infield.
I found the little Cars character vehicles at Target and they were the perfect size for the racetrack.
I cut out small rectangles of cardstock in green and black to place under them so they didn’t get messy.
I also found some Cars printables images online (I wish I could remember where!) with some of the fun Cars-themed sponsors so I printed those out and attached them to toothpicks and placed them around the track. The #2 on the cake is from the Mickey Mouse party pack in my Etsy shop. The banner was a quickie last minute idea because, to me, a birthday cake is just not complete unless it says happy birthday and has the birthday boy’s name on it! 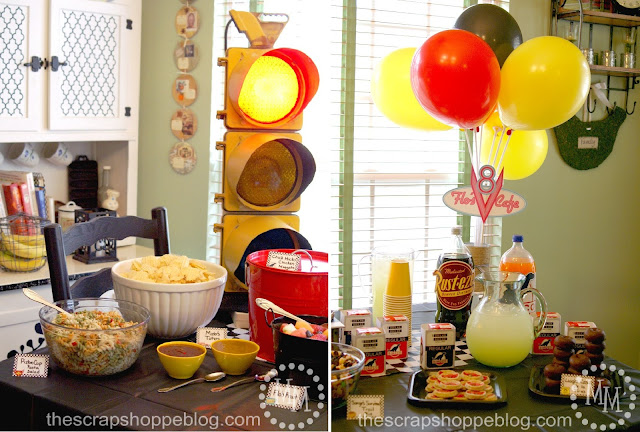 I like to balance each end of the party table with something a tall.
Lucky for me, my father-in-law collects a lot of vintage items and car-related items so I knew he had a stoplight in his stash. He kindly let me borrow it, and we even had it on during the party!
For balance on the opposite end of the table I used my trusty balloon sticks (these are so handy now that helium is so expensive!) for some of the black, red, and yellow balloons being used to decorate the house. I also found this super cute Flo’s V8 Cafe printable that I cut out and attached to a thin dowel rod and placed with the balloons. 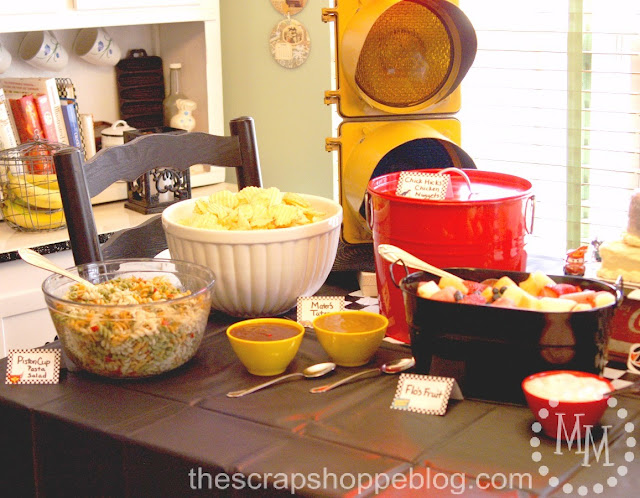 Let’s take a closer look at the food, shall we? I had a lot of fun with the menu!
Above we have Piston Cup Pasta Salad, Mater’s Taters, Chick Hicks Chicken Nuggets, and Flo’s Fruit.
We decided to get a party tray of chicken nuggets from Chick-fil-a. It was a little pricey, but totally worth it in the end. My boys love Chick-fil-a nuggets! Plus it came with 2 dipping sauces. It was a huge hit with everyone! The red bucket that the nuggets are in is actually a drink server. I just have it turned around so you don’t see the spout. I lined the inside with parchment paper and was able to keep the lid on it when we weren’t getting food to help keep the nuggets hot.
And did you notice my food tent signs? Love them!! 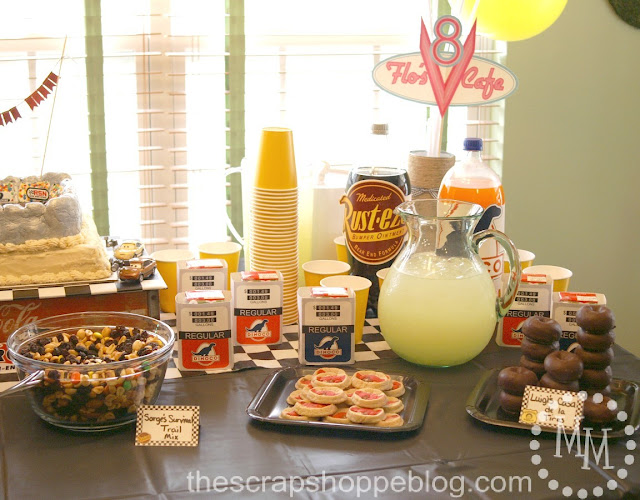 On the other end of the table we had Sarge’s Survival Trail Mix, Luigi’s Casa Della Tires, some awesome Lightning McQueen Pillsbury cookies I found at the grocery store just a day before the party, and our beverages.
The tires are stacks of chocolate donuts. Another big hit with the kiddos! And apparently my dad, too.
For the drinks, I re-wrapped a Diet Coke bottle with a Rust-eze label and re-wrapped a bottle of orange soda with a Dinoco label. The juice boxes were wrapped in printables made to look like gas pumps! And, as you can see in the photo, my printables are too big for the boxes. That’s what I get for not measuring first!! (I’ve since adjusted the size of the printables to fit most standard juice boxes!)
And finally we have the lemonade… but it has its own story to go with it.
So I have this awesome ginormous glass drink server. You can see it in its first use at my son’s 1st birthday party last year. We’ve used it a couple of more times since then. Its perfect for parties and gatherings!
Its nearly time for the party to begin. All of my husband’s immediate family and my parents are already there. I’m hanging up last minute decorations in the living room. The hubs is in the kitchen making lemonade to go in my awesome ginormous drink server.
Suddenly I see my father-in-law FLY across the living room towards the bathroom. I run to the kitchen to see what happened thinking the hubs has hurt himself in some way.
NOT EXACTLY!
When he went to set the awesome ginormous drink server on the table (the table which already had everything for the party on it), the nozzle cracked and lemonade went shooting everywhere!!
Thank goodness for my wonderful family. They immediately went to work snatching things off the table before they could get soaked and grabbed towels and mopped the whole thing up. Our guests that arrived later never even knew what had happened!
So much for my awesome ginormous BROKEN drink server!! 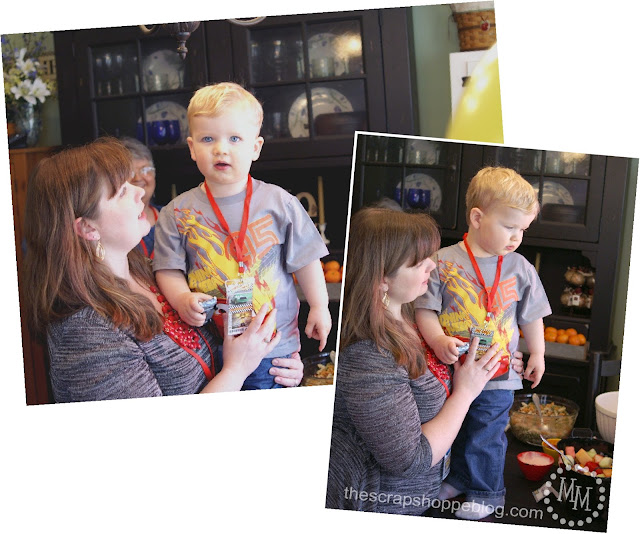 The birthday boy ready to blow out his candles!
This is the moment I think he first realized this party was for him. 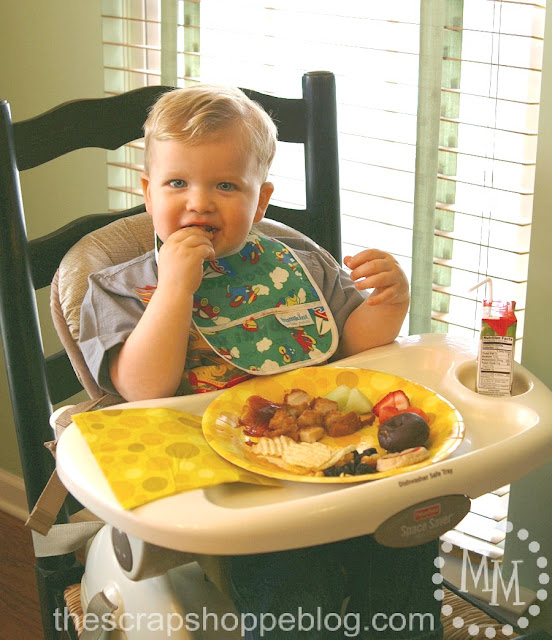 And, of course, chowing down on his Chick-fil-a nuggets! This was the perfect meal for this little guy. 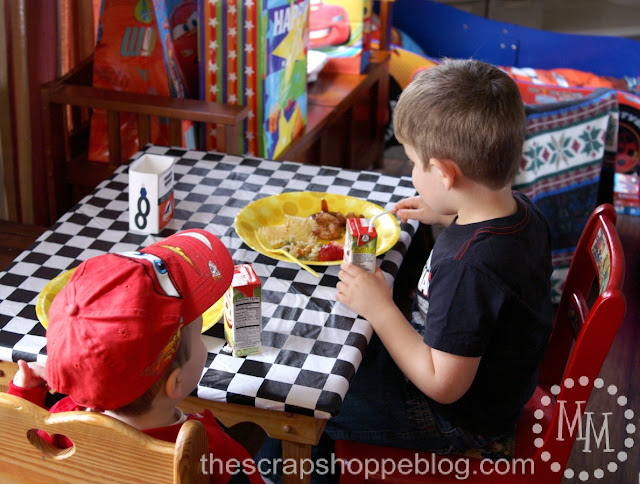 Remember that checkered vinyl I mentioned earlier?
I also used it to make a tablecloth for the kids’ table and you might have also noticed I made some as a runner for the party table. Best fabric remnant find EVAH! 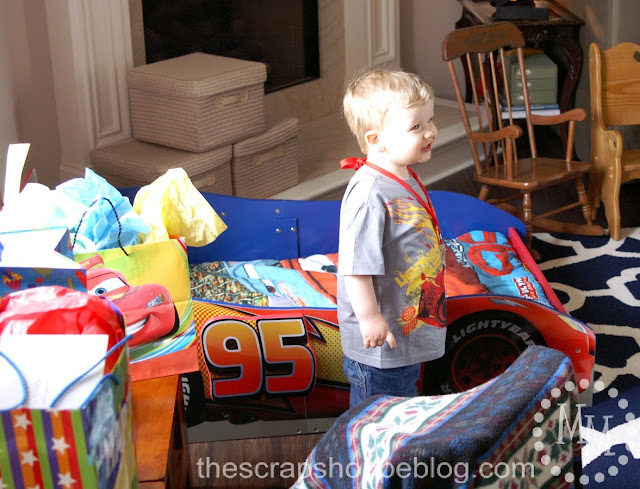 Our big gift to the little guy was a new Lightning McQueen toddler bed that we snagged on Craigslist.
No more crib for this kid! We just moved from baby to big boy! And he loves it!
It took a few nights to get used to it, but he’s been sleeping great in it since. 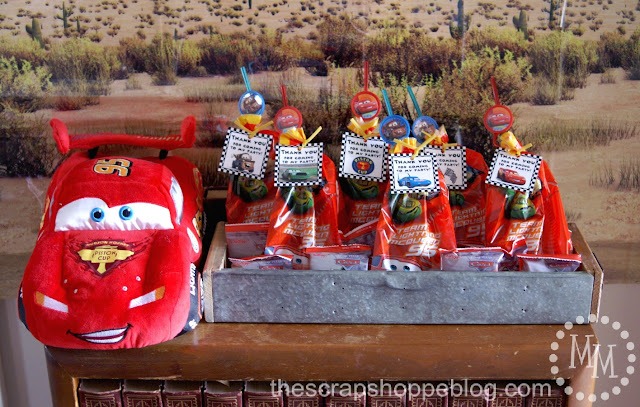 These were the parting gifts for our smallest guests.
I filled the bags up with various Cars-themed toys, bubbles, and stickers. And the silly straws that are sticking out the top of the bags! The thank you tags are part of my printables. 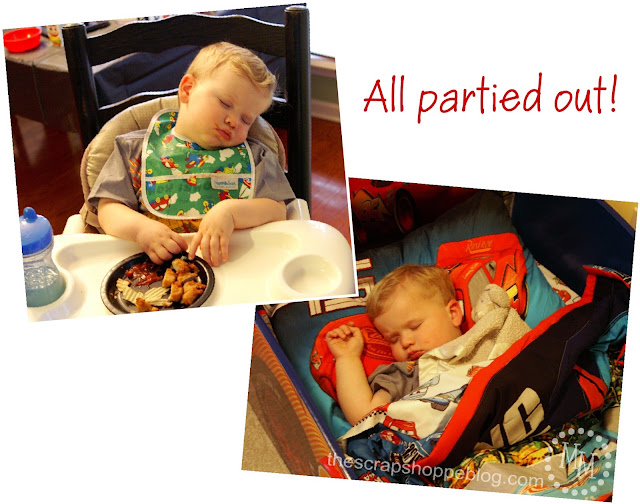 Later that day we were settling down for dinner (you guessed it, leftover chicken nuggets) when we noticed this little guy getting really quiet. It was just too much fun for one day!
We were able to get him cleaned up and in his new bed for a nap completely seamlessly. He was so tired! 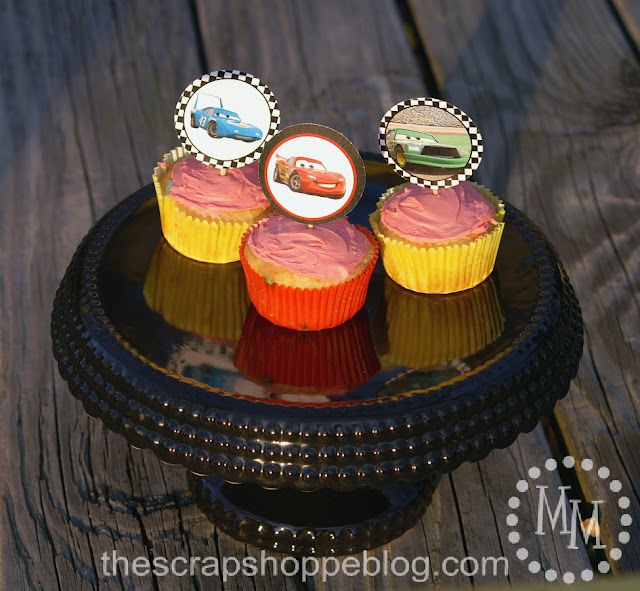 For his actual birth day, we took cupcakes to school for all the kids in his daycare class.

With Easter falling so early this year, his birthday was also the day of the big Easter party at school.
So with all those extra treats I know his day was extra special! 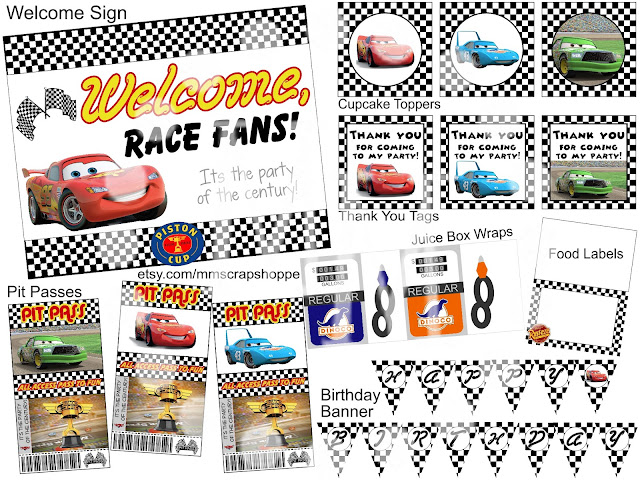 The Cars printable party pack used for this party is available in my Etsy shop!
I used everything except for the birthday banner. 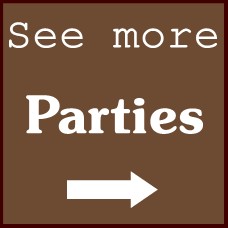 You can click here to see our past parties!
Linking up to Flamingo Toes, Skip to My Lou, Today’s Creative Blog, The Shabby Creek Cottage, Tidymom, 504 Main, Serenity Now, Whipperberry, My Repurposed Life, 30 Days, Tatertots & Jello, Positively Splendid, and other great parties found on my party page.