I hope everyone had a happy Halloween yesterday! My nearly 14-month old son was a firefighter for Halloween this year (thanks to all the fireman gear his grandmother got him for his birthday in September! thanks, Grandma!). My DH and I decided we would coordinate our costumes to match our little firefighter! I was a dalmation and DH was a fire hydrant. 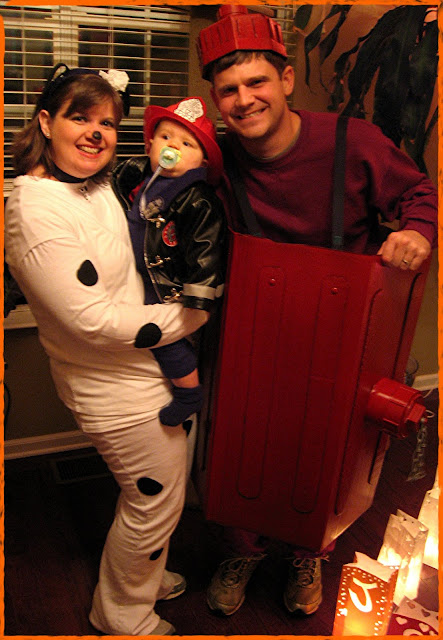 We’re all about making our costumes from scratch.

My costume involved wearing white from head to toe. I bought sticky-back felt and cut a bunch of circles out of it and attached it to my cloths. I use regular black felt to cut out ear and attached them to a black headband (adding a little wire to make the ear stick out instead of just hanging against the headband). I also added a flower to the ears just to show I was a *pampered* pooch. I happened to have a dalmation charm which I added to a piece of silk ribbon that acted as my dog colloar. Top all of that off with some black lipstick on the nose, and voilà! Dalmation!

DH started of with a large rectangular box of cardboard that he folded into a hexagon. We cut other pieces of cardboard to add more detail to the hydrant. More cardboard for the hat. A couple of perfect pieces of PVC pipe finished it off perfectly. DH spray painted a layer of primer and 2 coats of red. He added some chain to the nossle of the hydrant and some nylon belts to act as suspenders. He simply wore some red sweats underneath.

Now we’ll have to continue this family them in the future because it was so fun!

If you’re looking for more family costume ideas be sure to check these out!

Disney Foods | Where the Wild Things Are | Rainbow & Cloud

Love this one too!

Ha, ha, ha! Now that's getting into the spirit of things. You all look great!

The Answer Is Chocolate

Too cute. OK you really want that stocking huh?!

how creative!!! Great costumes! You should have won a prize!