Your kiddos will love these DIY Captain America and Thor costumes! And you will love how easy they are to make. 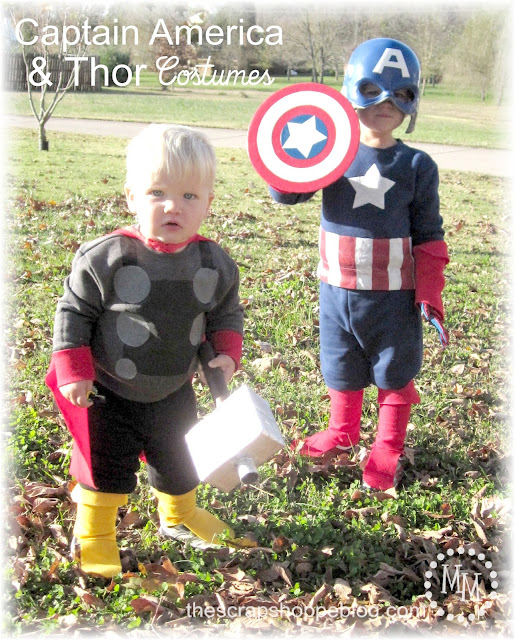 I tried oh so hard to convince my 4 year old to be Batman this Halloween.

Mostly so his brother could be Robin.

How cute would that have been, right?

And I want to be mean and make him do it anyway.

So when asked which superhero he wanted to be (and it was pretty much a given he was going to be a superhero; especially after his last birthday party!) he selected Captain America.

And we decided his brother would make a cute Thor with all his bleach blonde hair.

So I got to work DIYing some costumes!

I think you will love these DIY Captain America and Thor costumes! 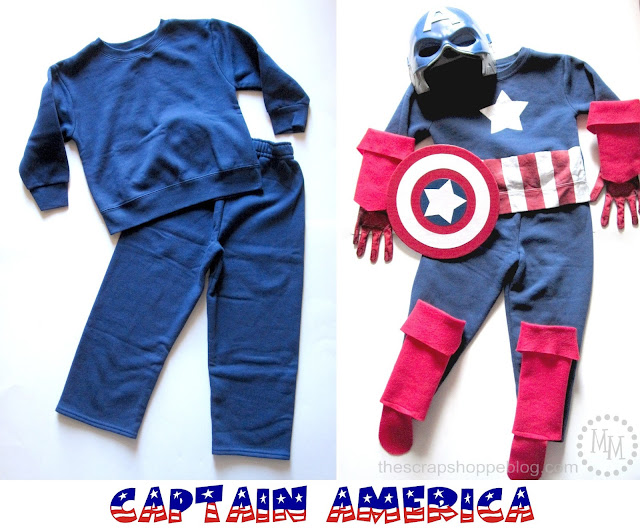 Let’s start with the DIY Captain America costume, shall we?

I started off with a pair of navy blue sweats. 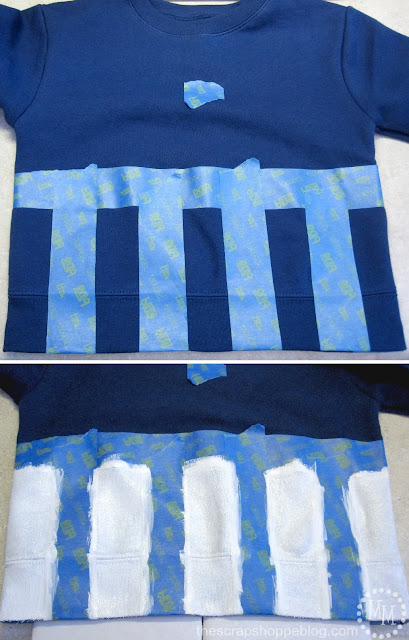 I decided the belt would work best if applied directly to the shirt.

I taped off a several inches of the bottom of the shirt and got to work on painting some stripes.

Whenever I paint on clothing, I mix acrylic paint with a textile medium (typically found with the acrylics) according to the bottle suggestion.

After washing, the paint becomes flexible and is more comfortable to wear. 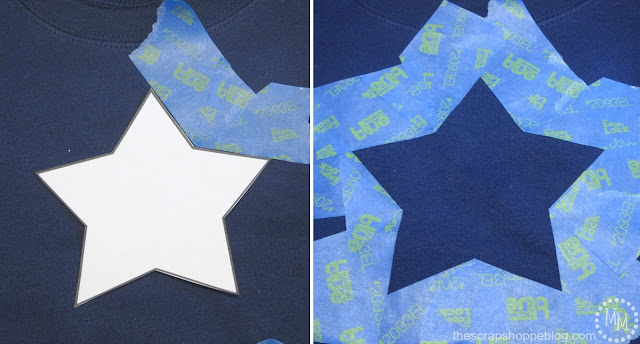 I printed a star to use as a template then taped around it to make a stencil.

Press the tape down firmly around the edges so your paint will not bleed onto the fabric. 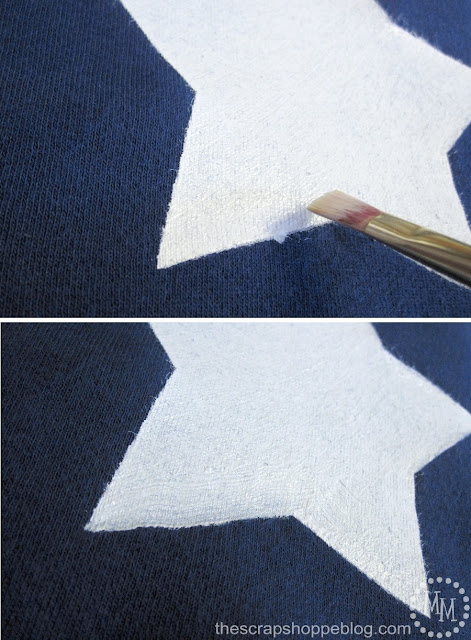 FYI: If any of your paint leaks under your tape you can always use a large flat paint brush and touch it up. 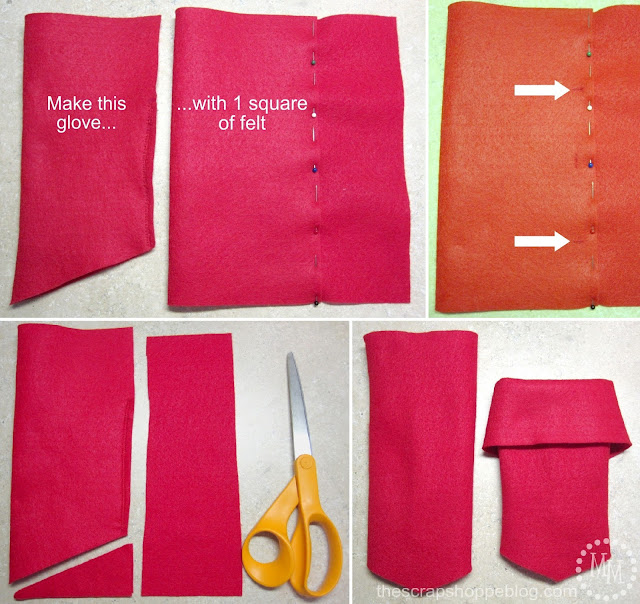 I found a pair of red gloves for my son to wear, but needed to make some sleeves to make them long like Captain America’s.

It will take one piece of red felt for each sleeve. Measure your child’s arm to get a good idea of how big the sleeve will need to be.

The idea is for the sleeve to fit over the sweatshirt sleeve so it will need to be roomy.

Fold a square (ok, its really a rectangle) of felt over and pin it in place.

After stitching, cut off the extra felt to the right of the stitching and set it aside.

This will create a point for our sleeves which will be over the hand.

Pull the sleeve right-side-out then fold over the un-sewn material at the top of the sleeve to complete the look.

Repeat for the second sleeve. 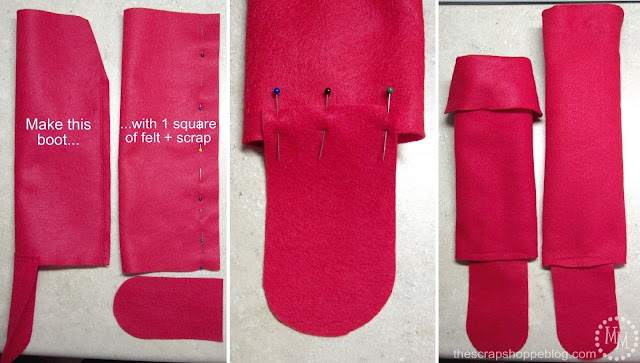 I styled these boots after the ones I made a few year’s ago for my son’s pirate costume.

They are basically a sleeve with a little flap at the bottom that sits on top of the shoes to give the look of a boot.

It will take one piece of red felt for each boot plus one of the strips of scrap from making the glove sleeve.

Measure your child’s leg to get a good idea of how big the boot will need to be.

I wanted a tall boot so I had to I just fold the felt in half which ended up making it a little snug and there was no way that the sweatpants were going to fit under it.

So I just rolled the pants under until they were above the boot.

Stitch up the length of the felt stopping two inches from the top.

Fold the scrap of red felt in half so that you can cut two identical rectangles of fabric in which one end is rounded.

It will need to be large enough to cover the top of the child’s shoe. Stitch the foot cover to the bottom of the boot sleeve

Pull the boot right-side-out then fold over the un-sewn material at the top to complete the look.

Repeat for the second boot.

This boot tutorial works for both DIY Captain America and Thor costumes. 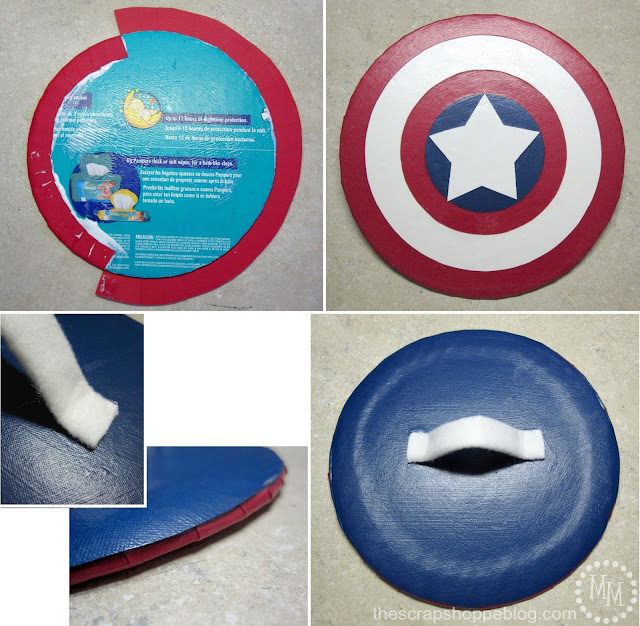 Grab some scrap cardboard (I used a diaper box) and cut out a circle 10″ in diameter.

Cut the excess paper around the edge into strips and fold/glue it down one piece at a time to the back of the cardboard.

Find something round to use as a template and cut out a circle on white cardstock.

Cut a smaller circle out of blue cardstock and glue it to the center of the shield.

Cut a star out of white cardstock and glue it on top of the blue circle.

Cover the back of the shield with a circle of blue cardstock.

Create a handle for the back of the shield.

I used a scrap piece of white felt I had on hand.

I folded it into thirds to make it extra sturdy then glued each end to the back of the shield.

Go back and cover the entire front and back of the shield with a coat of Mod Podge.

Make a helmet if you need one.

We happen to have a mask on hand.

And now we have all of our extra accessories needed for Captain America! 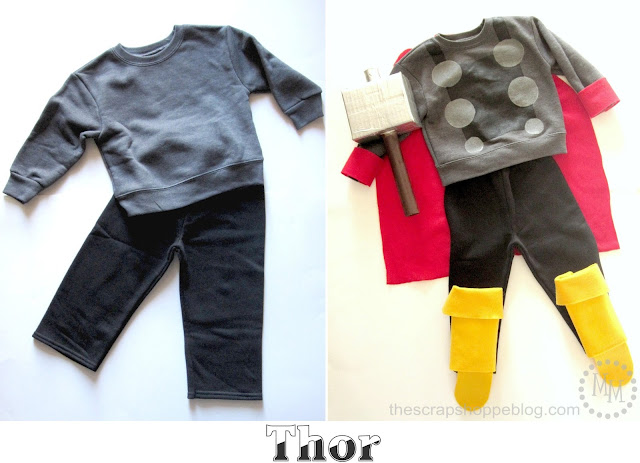 For the DIY Thor costume, I started off with a gray sweatshirt and black sweatpants. 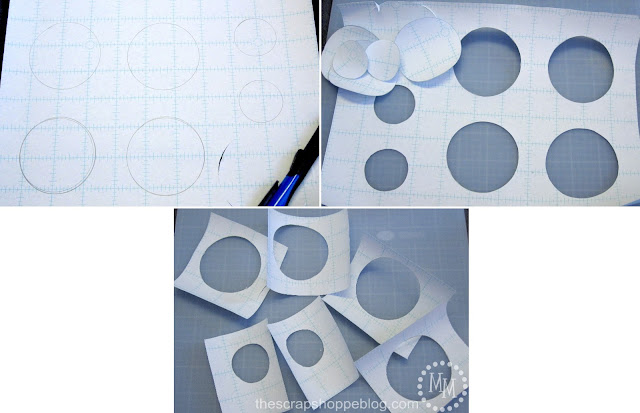 To make our chest protector we need to start with a template.

On contact paper, vinyl, stencil paper, or whatever you happened to have, draw 6 circles: 4 2-inch circles and 2 1-inch circles.

Using an X-acto knife or circle cutter if you have one, cut out the circles.

Be sure to keep the circles because we will need them later.

Cut apart the circle templates so you can place each individually on the shirt. 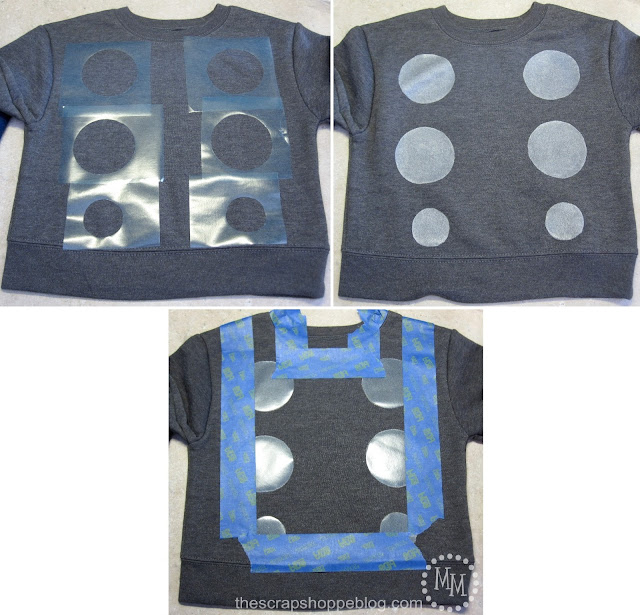 Place the circle templates on each side of the shirt, almost where you would place suspenders.

Place the larger circles at the top and the smaller at the bottom.

Once dry, remove the circle templates and cover the the painted areas with the circles we set aside earlier.

Tape off a chest protector around the circles covering a majority of the front of the shirt. 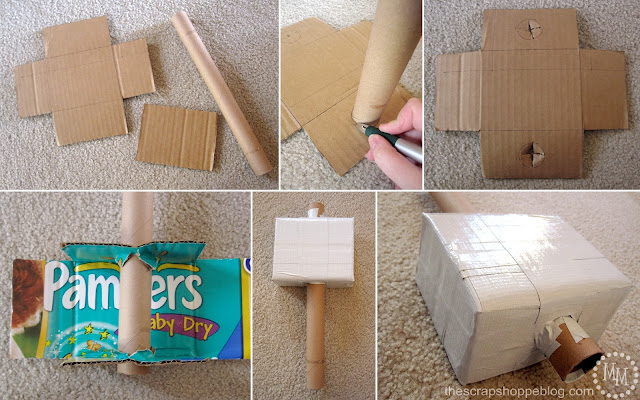 Use scrap cardboard (again, I went back to my trusty diaper box!) and draw out the two pieces I have shown above.

Hammer dimensions above are 5x4x2.5″.

You will also need a cylindrical piece such as a paper towel roll (or AL foil roll like I used).

I like the AL foil roll because its smaller in diameter and sturdier that the paper towel roll.

On the flaps that will ultimately be the top and bottom of the hammer, trace the circumference of the AL foil roll then, instead of cutting those circles out, cut them into fourths.

This will make the roll tighter when you push it through the holes.

Crease the side flaps and insert the roll so that all of the all extra pieces of cardboard will face the inside of the hammer.

Using Duct Tape (silver if you have it), tape the box of the hammer together thoroughly.

Attach the smaller piece of cardboard to the back side of the hammer to complete the box look.

If you don’t have silver Duct Tape on hand (whaaaaat?) then you can paint the hammer silver.

That’s what I did and then painted the handle brown.

Make a pair of yellow boots following the same directions as above for Captain America.

For the wristbands I simply cut rectangles of red felt and glued Velcro to the ends to easily take them on and off.

Make a cape if you need one.

We have a red one on hand already.

And now we’re done with Thor! 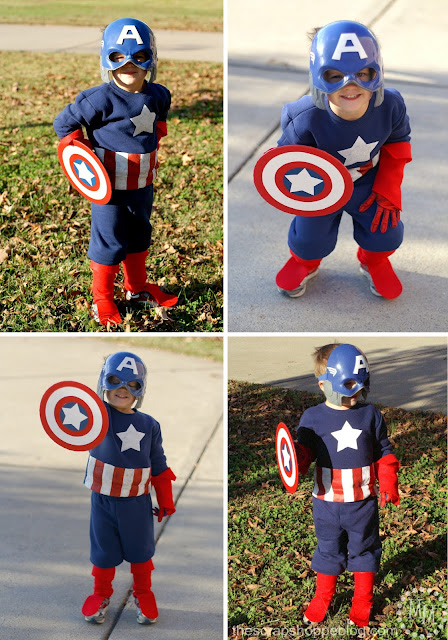 I think its pretty safe to say that Captain America is quite pleased with his costume!

He’s so excited to wear it to daycare for his Halloween party on Wednesday.

You can see that I folded the bottom of his pants under so they rest on top of the boots.

It actually kind of adds some bulk to his skinny little legs making them look a little more muscular! 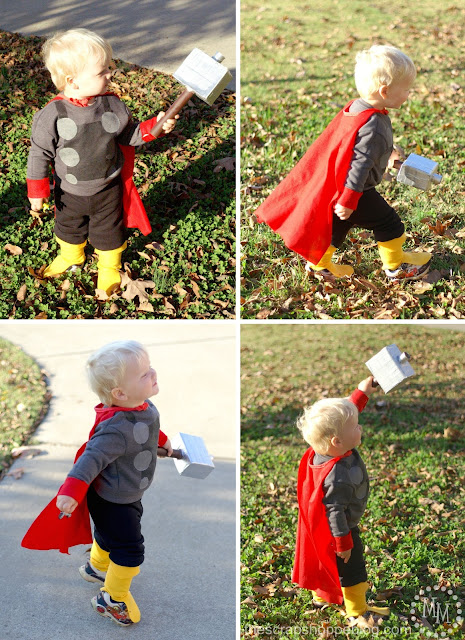 Thor was pretty enthralled with his hammer and, for a 19 month old, was pretty patient getting on all his gear.

His pants are also rolled under to the top of his boots. 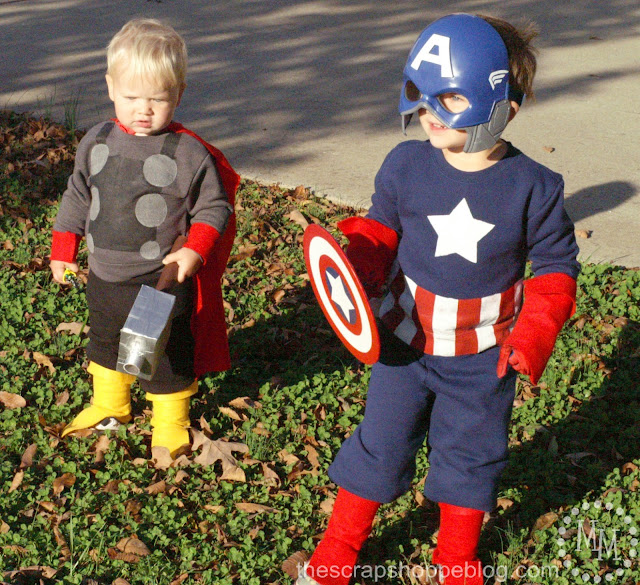 I think we’ll have some fun dress ups this winter!

There’s no way these costumes will not become play items after Halloween.

I’m so excited for them to wear them this week!

Give these DIY Captain America and Thor costumes a try for your little ones.

Looking for more costumes for boys? Check these fun ideas out!

Awesome !!! I really like the simplicity in this. Didn't even know, how much you can do with Pampers box :)

Wow, you are so great, really amazing work, your kids looks really adorable wearing your DIY captain american and Thor, as you know, the civil war movie is coming soon, and i am planing to get a civil war costume for my 5 years olds boy from some uk store or online store like cosplaysky.co.uk, but they decline my request, as they are unable to custom made a costume for so young kid, do you have some some ideas on how to DIY the civil war? if yes, then could you pls help me ? my son is really eager to have the captain american.

Awesome DIY costumes.Your boys looks adorable.Thank you for sharing with us at #HomeMattersParty. We would love to have you again next week.

What adorable little superheroes!!! I especially love the boots and the hammer. That was smart to make the hammer out of cardboard so it wouldn't be too heavy for Thor to carry.

These are just so creative and adorable. i am in awe!