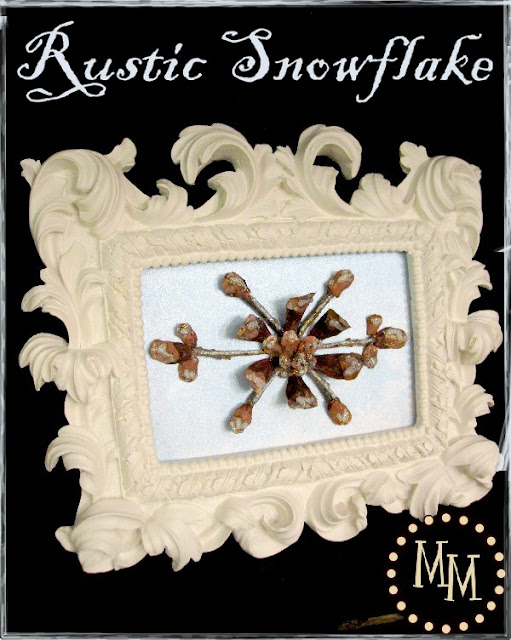 Confession #1: I become terribly sad when my Christmas decor comes down. I refuse to take it down until the new year. It makes the house feel so cozy when its up and so empty when its gone. So to help me feel better I like to decorate for winter! The snowmen and anything “snow” related get to stick around for another couple of months!
And in my pursuit to add to my winter collection I made this
Rustic Snowflake! 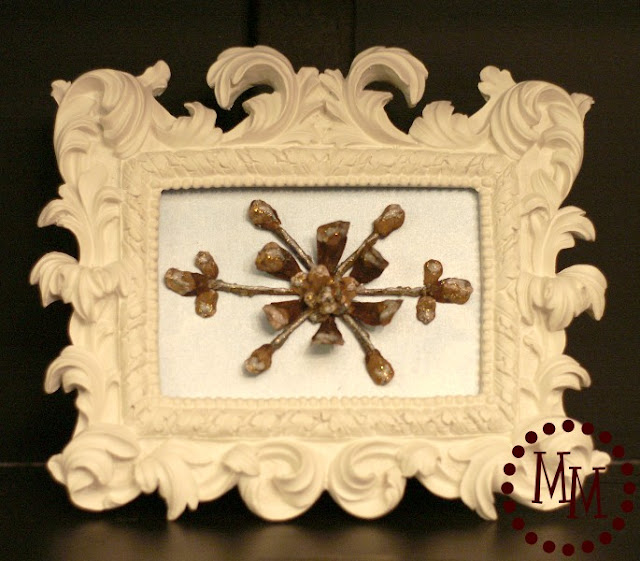 Confession #2: I totally did not think this project was going to turn out well when I started it but luckily after walking away from it for a day and coming back I had a new vision, and I’m happy to say I love how it turned out in the end! That’s mainly why I’m showing it to you. Ha!
So let us get on with the tutorial… 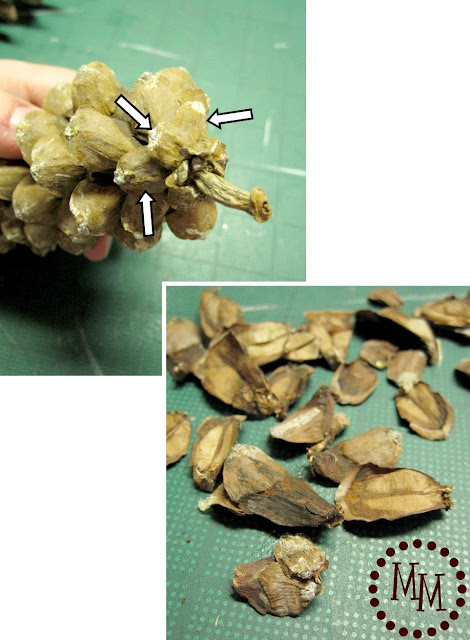 I have a lovely collection of pine cones thanks to friend Deneen. She rescued an entire grocery bag full of them for me from her backyard after I admired a project she had done with them.
To make this rustic snowflake, we need several pine cone bracts (I totally looked that up) of varying sizes. The bottom of the pine cones have the smallest cone bracts (see the arrows). Carefully pry off several of these, working your way up until you have a nice little collection of bracts. 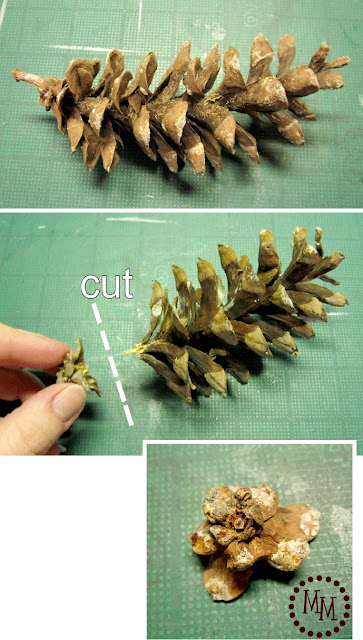 For the center of the snowflake, we’re going to use a new pine cone. Using a sharp pair of scissors, cut off the bottom of the pine cone about half an inch from the base. It may take a little twisting action to completely separate the two pieces.
Trim off any of the larger bracts that you think may look too big to be on the center of your snowflake. Its entirely up to you how it looks!
Remove the stem protruding from the end. 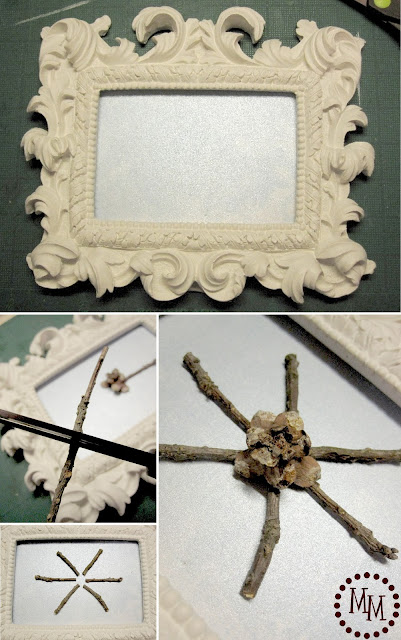 I’m using the same frame I used for my book page pumpkins. I trimmed some fun blue iridescent scrapbook paper down to size and went ahead and placed it in the frame.
I found a thin twig in the yard, and trimmed it down to size to be the arms of my snowflake. By placing the center of the snowflake on the paper, I had a rough idea of how long the twig pieces needed to be.
Once everything was cut, I removed the center and glued down the twig pieces using a very thin line of my Beacon’s 3-in-1. Then I glued down the center. 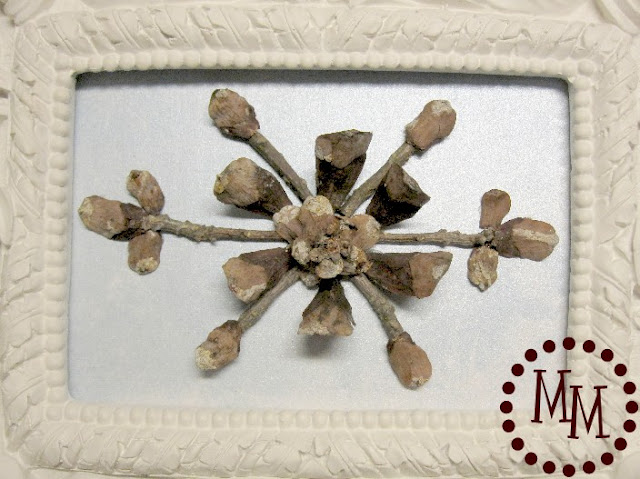 Now you get to be creative and decide where you want your pine cone bracts to go!
Lay them all out before gluing them down.
I used some medium sized pieces for each end of my twigs and glued them directly on top of the twigs. Then glued some smaller bracts to the sides on the left and right ends. The largest bracts I glued in between the arms of the snowflakes and let them stick out away from the paper for the 3D effect.
This is when I walked away not completely feeling the project. It was late. I was tired.
Luckily when I came back the next day, I was surprised to discover that it looked pretty good!
It just needed a little something more… 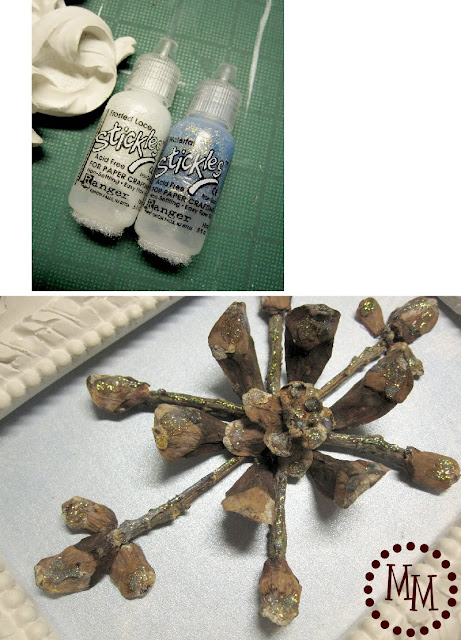 Like glitter!!
I used a couple of different glitter glues and applied them in various places on the snowflake to look like snow had fallen on it.
Yep, I think that’s exactly what this project needed! 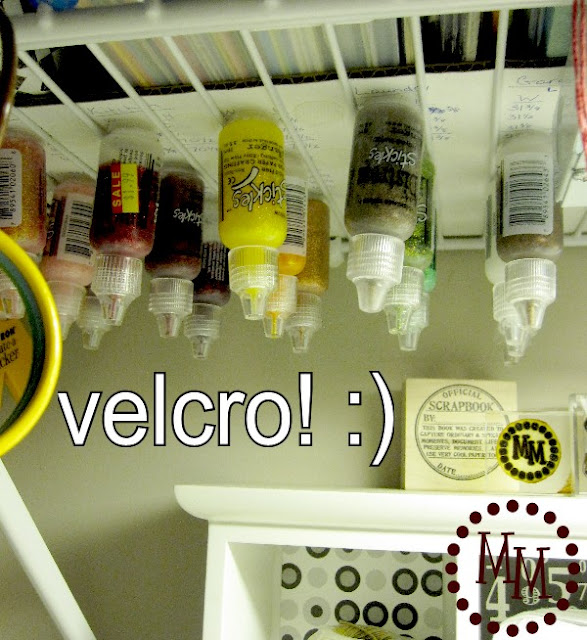 Incidently, I store my glitter glues upside down via some Velcro under a shelf so that 1) They are always ready to be used at any time. No waiting for the glue to fall to the tip! and 2) They are clear of the desktop leaving me space to clutter it with other items. 🙂 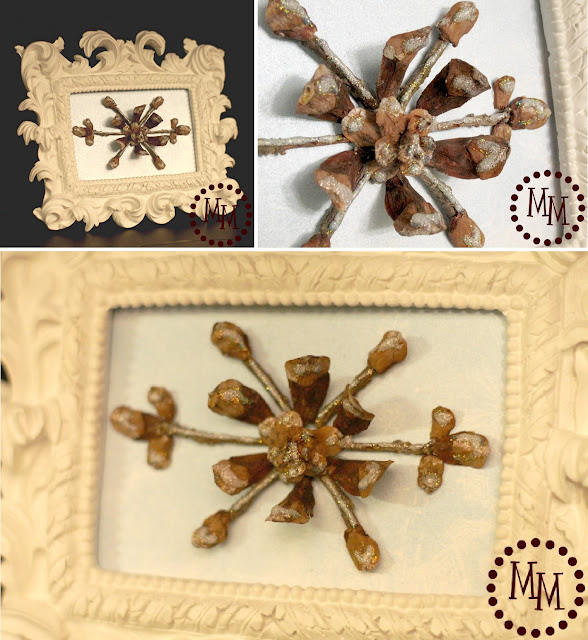 And I’m officially in love!
Not only was this super inexpensive to make (frame on hand, pine cones and twigs from the yard, scrapbook paper from my massive stash…) 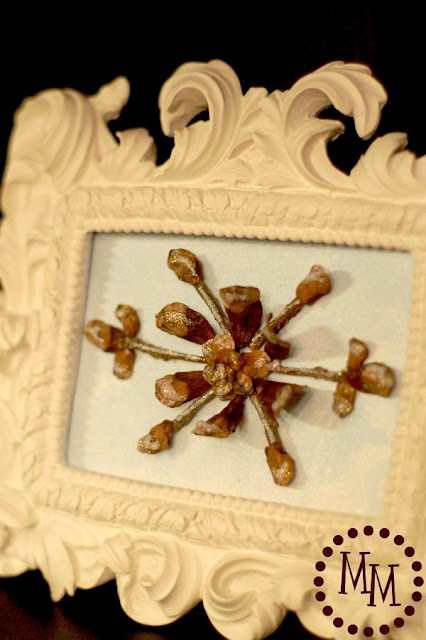 Yet another gratuitous shot because I had a hard time narrowing down which photos to use…
You understand. 🙂 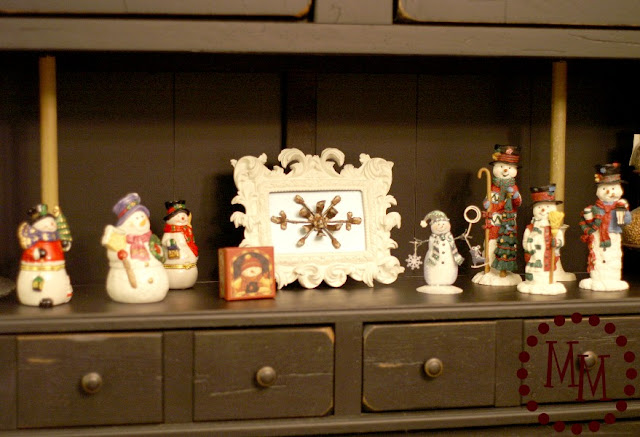 I think it looks pretty darn cute on my hutch surrounded by my little snowman figurine collection!
Not bad for what I was convinced was going to become a complete project fail. 😉
I link to these fun parties!