I have a slight obsession with all things wood grain. If I see the pattern on something I become somewhat obsessed with it! My mom would tell you I shoved her out of the way once at Target to get to a (gorgeous) wood grain patterned ice bucket. I would say I politely asked her to move a little faster so I could get a closer look at it.
Wood grain (or faux bois if you prefer) is seriously on trend right now.
So when I found out that the Mod Podge Rocks stencils from Plaid included a wood grain pattern, I was pretty much beside myself! The first thing I decided to make with it? A super trendy gift bag! 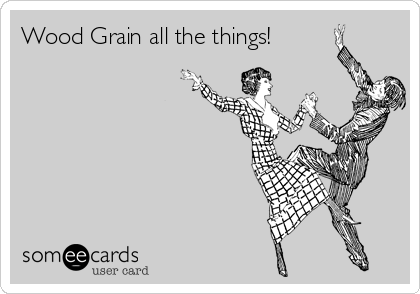 This is how I feel about the new stencil. Wood grain all the things! Nothing will be safe in my house!
But let me tell you a little more about the stencil line itself… 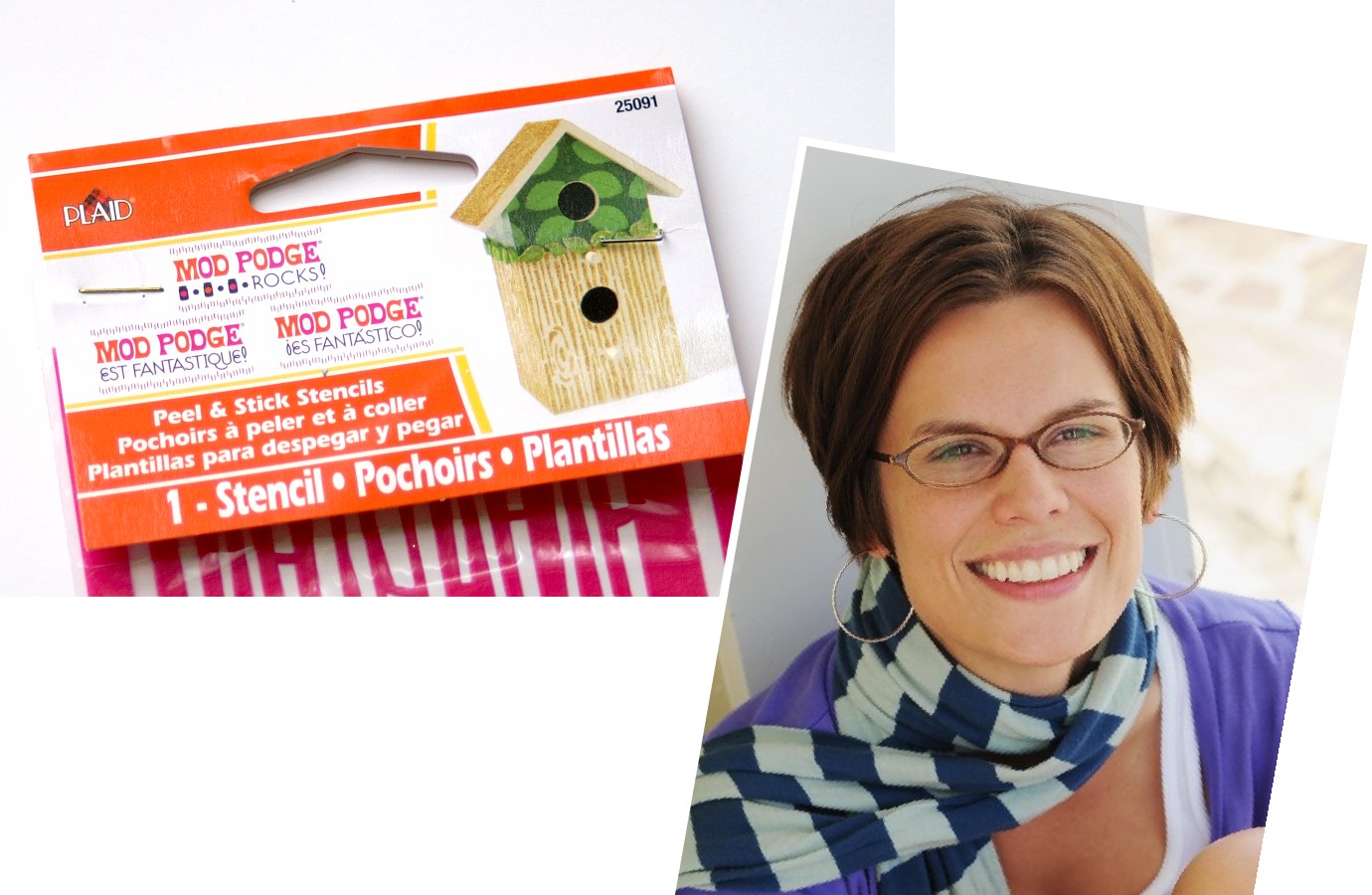 The new Mod Podge Rocks stencils are designed by blogger Amy Anderson of the blog Mod Podge Rocks! Seriously, Amy is the sweetest and funniest gal. I was able to meet and hang out with her at my first ever blogger conference, SNAP! in 2012. She’s so down to earth, and I couldn’t be more thrilled for her with her new stencil line! 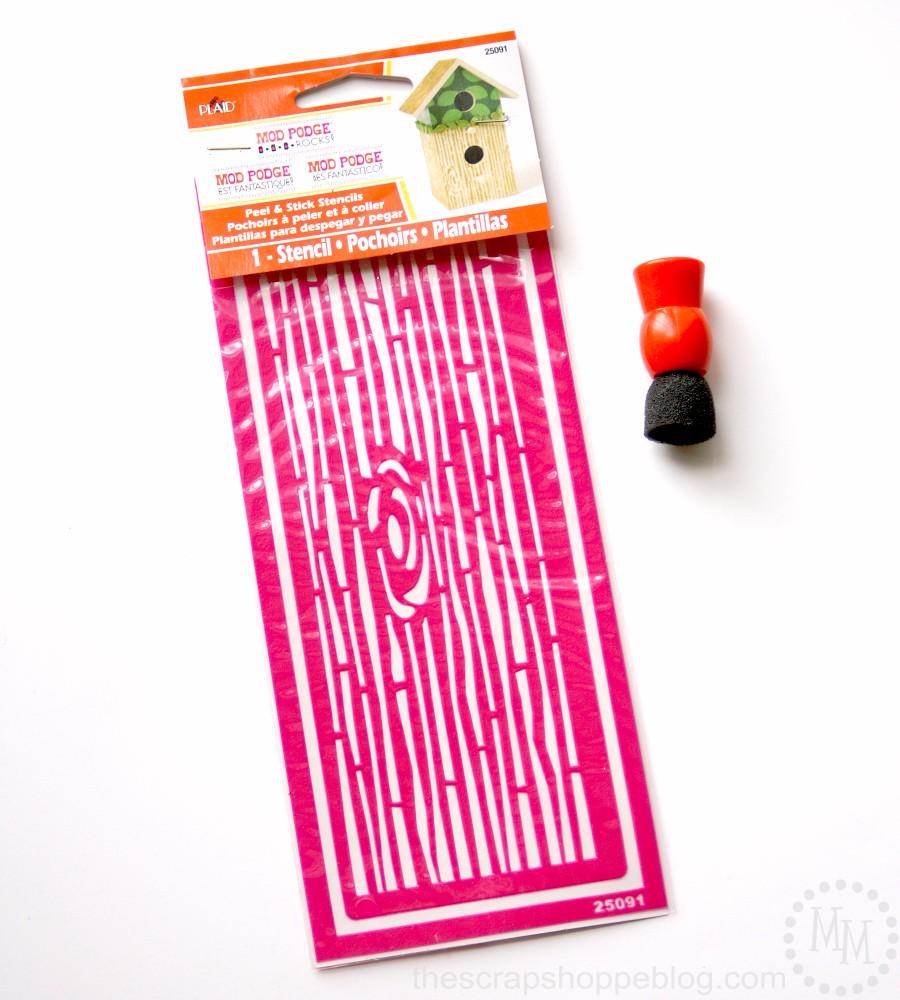 The Mod Podge Rocks stencils come in 6 trendy patterns. There are also spouncers and glitter available that make these stencils even easier to use. They can be found exclusively at Michaels stores. Amy has a great step by step tutorial for using glitter with the stencils.
So, other than the wood grain pattern of the stencil, my favorite thing about it is that it is peel and stick! That’s right, there is adhesive on the back so that nothing can get under the stencil so you get nice clean lines. That’s a must for a good stencil! 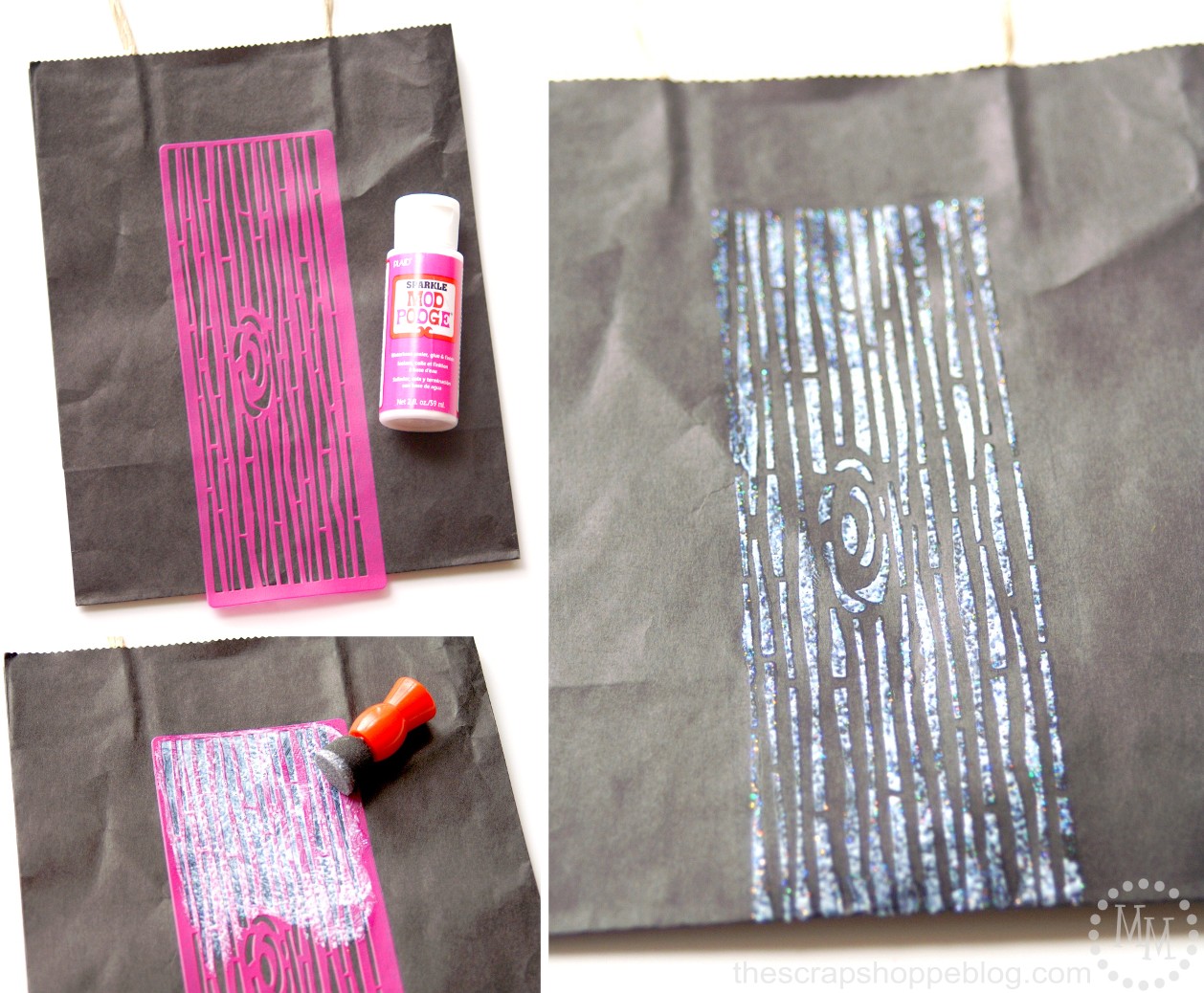 I decided to take a plain, boring, inexpensive gift bag and turn it into something super trendy and awesome.
If you have any qualms about using an adhesive-backed stencil on paper, don’t. This stencil worked perfectly without peeling or ripping the paper.
I carefully lined the stencil up on the bag, then used a spouncer to dab on Sparkle Mod Podge (always dab with a stencil, never brush). Once complete, slowly peel the stencil up to reveal the fun new pattern! The Sparkle Mod Podge goes on white, but will dry a clear iridescent with loads of glitter. 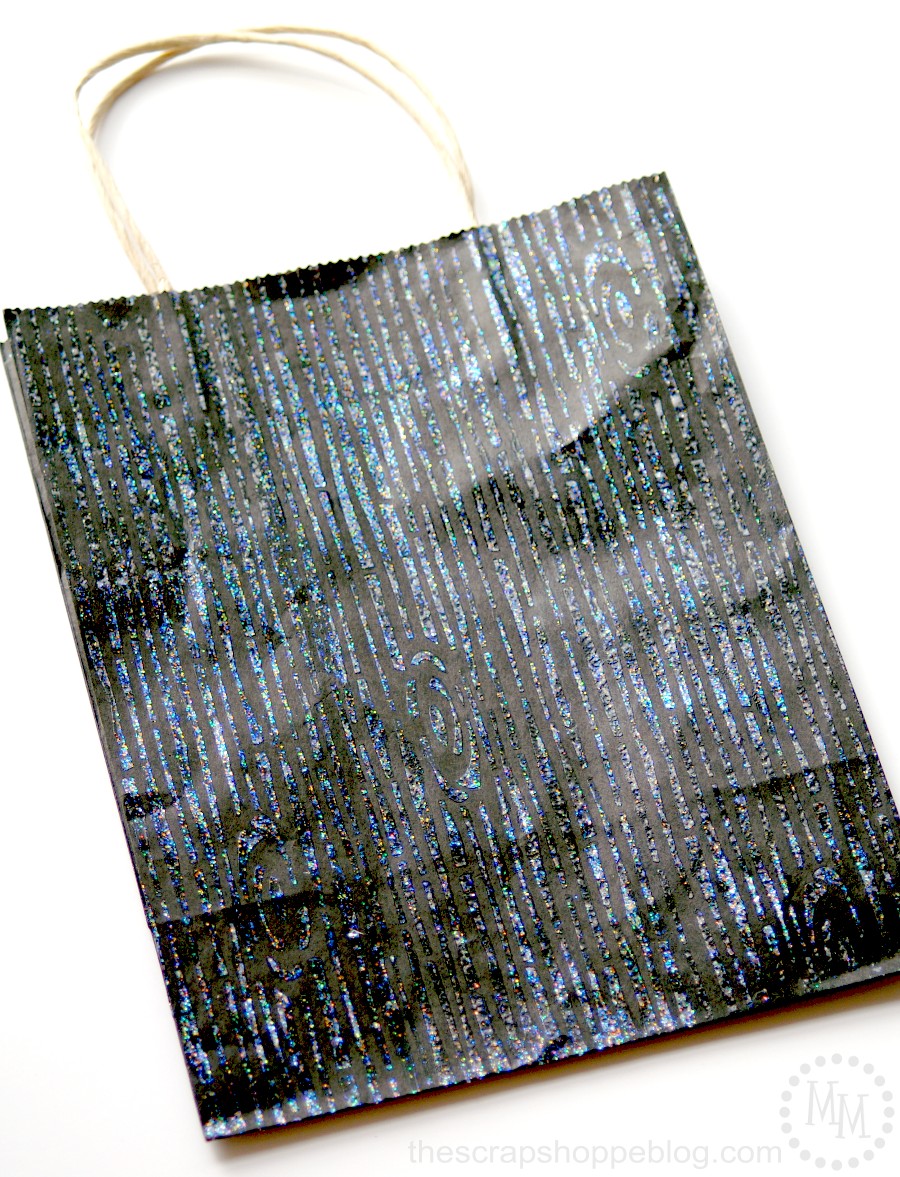 After the Mod Podge is dry, continue to apply the stencil to fill the entire front of the bag. The ends of the pattern line up perfectly for a seamless look. Between uses of the stencil, I wiped it down with a baby wipe then cleaned it with soap and water as suggested on the packaging when I was completely done. 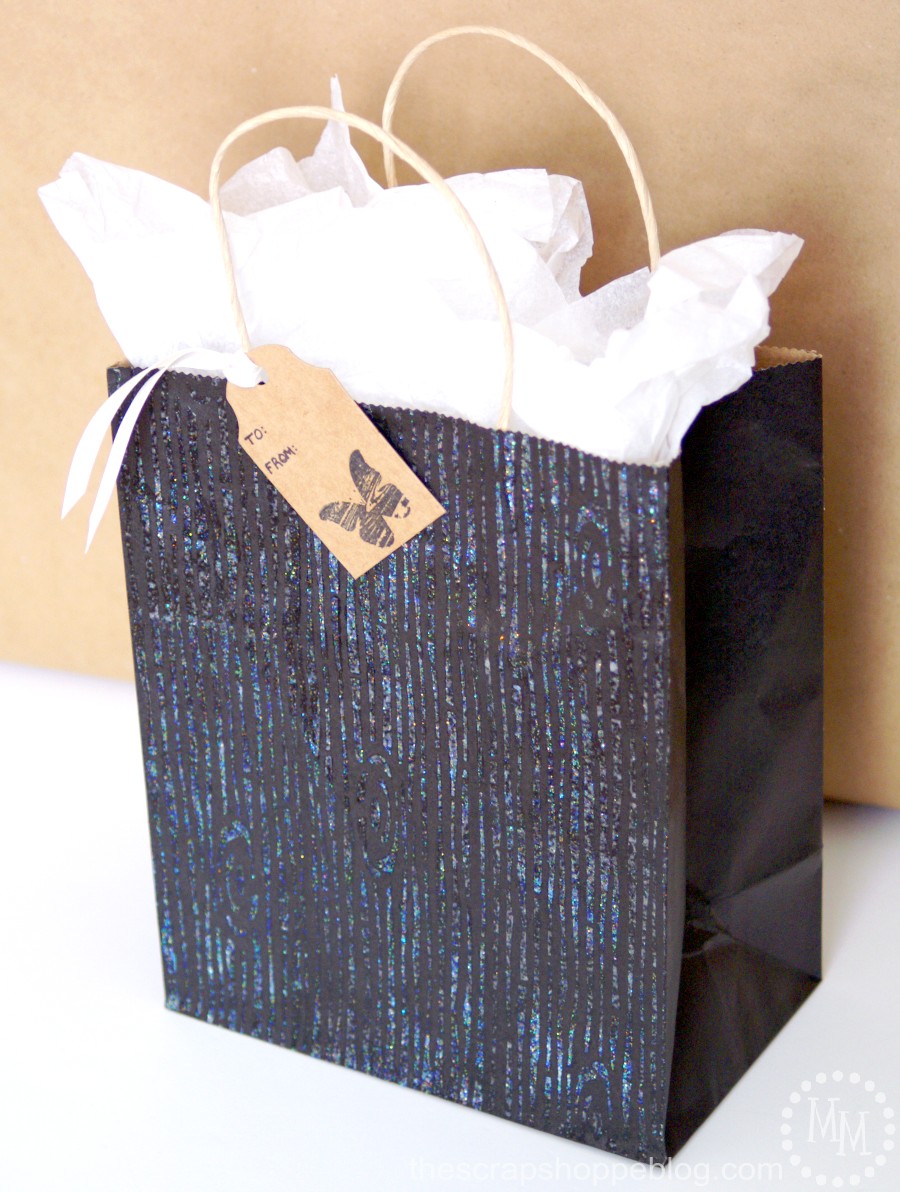 This gift bag has definitely gone from drab to fab!
I love that I was able to take something so plain and turn it into something super fun.
Now, how would you like a chance to win a Mod Podge Rocks stencil of your own?
Amy is offering one lucky reader a stencil from her new line!
Simply fill out the Rafflecopter widget below to enter.
Winner will be announced next Wednesday. Open to US residents only.
a Rafflecopter giveaway
This is not a sponsored post. I did receive the stencil from Amy, which she purchased herself, but I’m sharing this with you because I greatly admire Amy and love her new product!