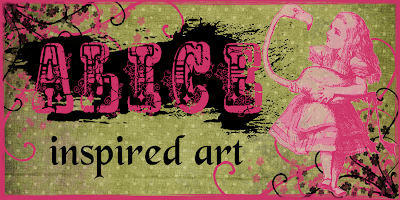 Over at Scrapbook.com I’m part of a very fun *critique* group. I say *critique* but typically we just provide friendship and support for one another. If one of us actually finds time to scrapbook or create a project, we know we can count on the others in our little group to offer praise. So the word *critique* is taken with a grain of salt!

Its seems we’ve all been in a bit of a crafting slump lately, so one of our group, Allie, decided to offer us a challenge. With Alice in Wonderland making its debut a couple of weeks ago, she thought we could make anything (scrapbook layout, altered project, anything!) with that as our central theme. Needless to say, we all jumped on it!

I wanted to share with you my project for the challenge. I’m not a big ATC maker {if you don’t know what an ATC is, you can read about them here}. In fact, I’ve only ever made them once before. But the Alice in Wonderland theme just screamed ATC to me for some reason. So that’s what I made!

Note: I used a set of playing cards that I found in the Target $1 spot as the backing for each card (including using the Queen of Hearts for my Red Queen ATC!). 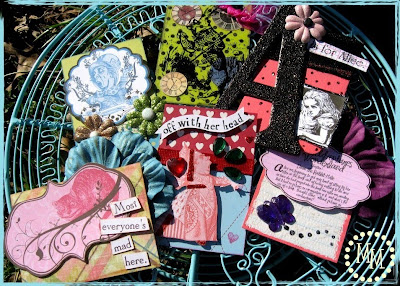 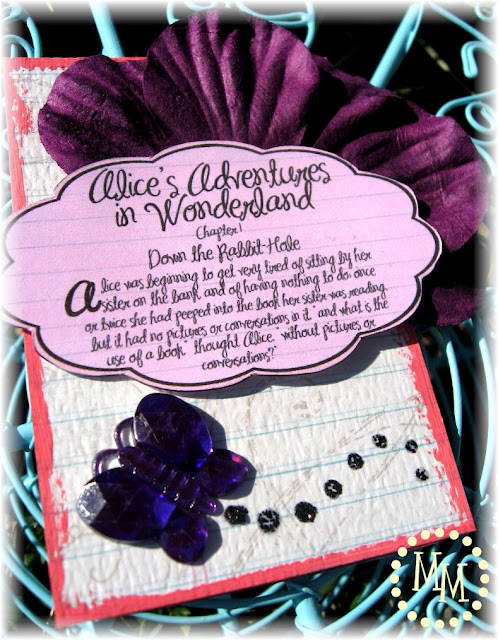 This is the first sentence in the book. It really sets the stage for the entire story. I painted the edges of the card with Making Memories paint.
I folded a large purple Prima flower in half to tuck behind the custom die cut. I also inked the petals with brown ink to make it look more realistic. I used pop dots behind the die cut to lift it off of the card, especially since the flower was going to prop it up anyway.
The butterfly is from a set of jewels recently given to me by a friend. I used black Stickles to create the butterfly’s “trail.” 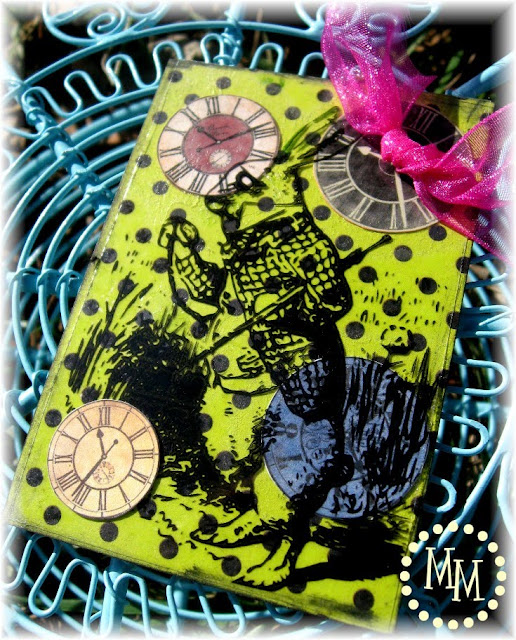 I printed several clocks from my custom die cut collection (available in my Etsy store) that I resized to fit my card. I placed 3 of these clocks directly on my green and black cardstock.

The pink ribbon is tied in a knot and added just to give a little splash of bright color and tie it in with the other cards. 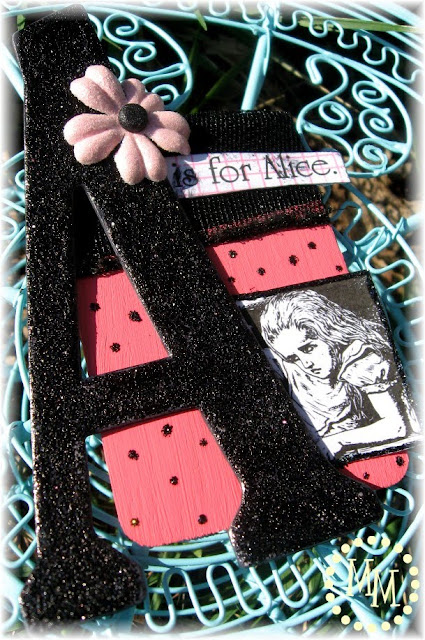 I painted a playing card with 2 coats of pink Making Memories paint.
I covered the top third of the card with a piece of black cardstock cut at an angle. I covered the cardstock with some mesh scrap fabric.
I took a large chipboard A from BoBunny and covered it with black Stickles. After it was dry I inked the edges with black Staz-on and inked on top of the Stickles in places where the chipboard still showed through.
I made a “is for Alice” on my computer using a fun font and some grid clipart that I made pink and printed that on some white cardstock. I inked the edges with black Staz-on.
I tucked some Alice in Wonderland clipart behind the A and stickled (I just made that a verb) the edges with black Stickles.

I added a pink glitter flower with a black glitter brad to the A and added some more Stickles to the painted portion of the card. 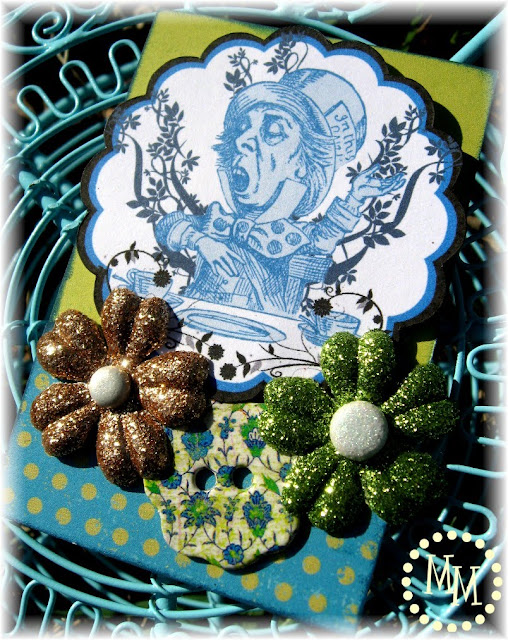 I took a piece of fun tuquoise and green doublesided cardstock and used half of one side for the top and the other side for the bottom. I inked all the edges with turquoise ink.

I used one of my custom die cuts of the Mad Hatter and propped him up with some pop dots. Since the “tea party” was outdoors I added some florals to the bottom of the die cut (a floral chipboard button and some glitter flowers centered with glitter brads). 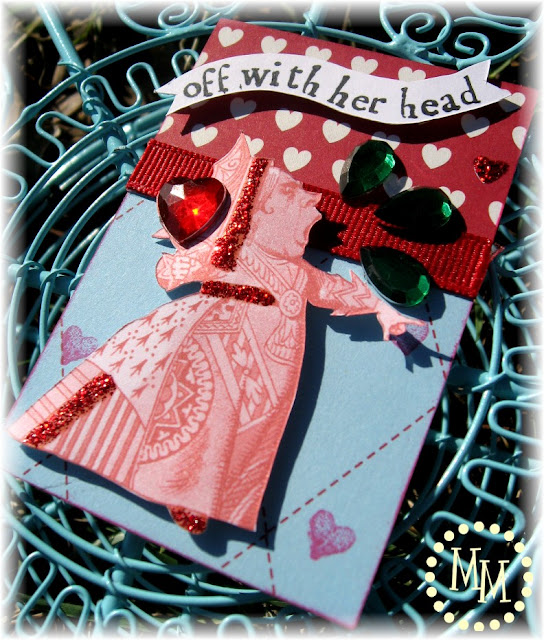 For the background I took two different patterned cardstocks and covered the seam with red ribbon. I inked the edges with red ink. I stamped some red hearts on the blue cardstock. I also filled in one of the white hearts on the top carstock with red Stickles.
I changed the Red Queen clipart from black to red then printed it on white cardstock and cut her out with my swivel X-acto knife. I added some red Stickles accents to her and propped her up with pop dots. I added the heart jewel. I also added some green teardrop jewels to look as though they were spewing from her mouth.
I stamped “off with her head” with some small alpha stamps then cut it out to look like a banner and added it to the card with pop dots. 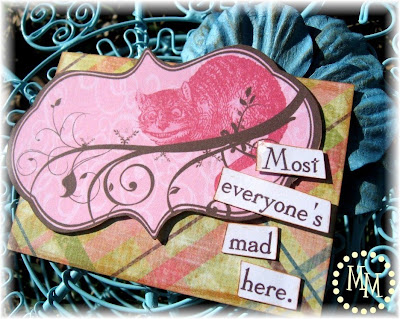 I love this quote from the Cheshire Cat. I printed in with brown ink on white cardstock, cut the words out, and inked the edges with brown ink. I added them haphazardly the card.
The rest of the card is simply one of my custom die cuts on some fun plaid patterened scrapbook paper. I felt like the card needed something else so I added a turquoise flower that I folded in half to the back of the card. I also inked the flower petals with brown ink to make them look more interesting. 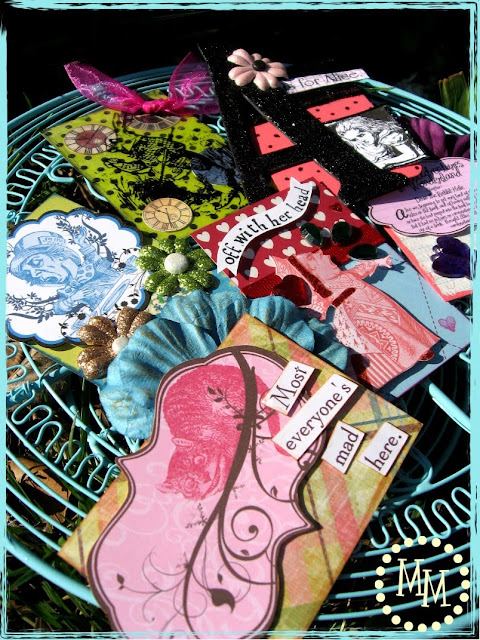 So that was my entry for the challenge! I thought they turned out pretty fun. The Queen of Hearts was quite popular with one of my friends and is now happily living in a new home. 🙂

So now my question is… what do I do with the rest of them???

Update: I still have the ATC cards stashed away. I just have not figured out what to do with them. They may end up in my Etsy shop before too long!

Kara @ Mine for the Making

Love alice and i love the way these turned out! vintage yet bright and fun. I like bev's idea of the frames.

These are soooo cool Michele!! My favorites are the red queen and the cheshire. I think they'd look so cute in open frames. Maybe you could let me know if they do end up in your etsy shop???? :)