These diaper and washcloth cupcake tutorials will be a big hit at the next baby shower you attend! 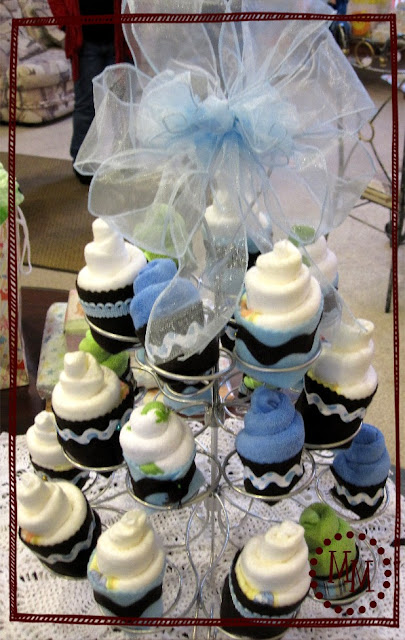 You asked for it, so today I am ready to share!

Today I’m showing you the tutorials for making the diaper and washcloth cupcakes featured from last week’s baby shower post! 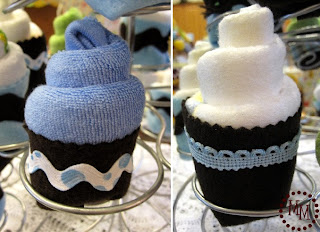 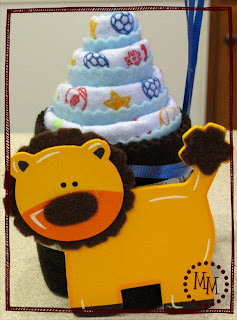 These are 3 examples of the “cupcakes” that I made for the baby shower. The first is from a baby washcloth (blue) , the second is a diaper (white), and the third is a flannel baby blanket. 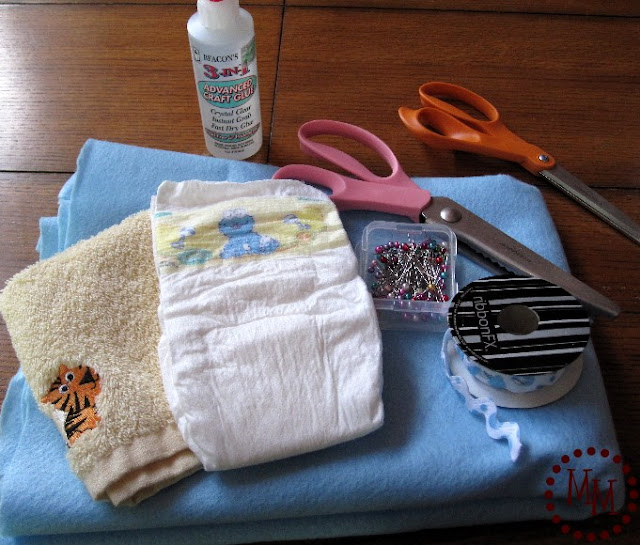 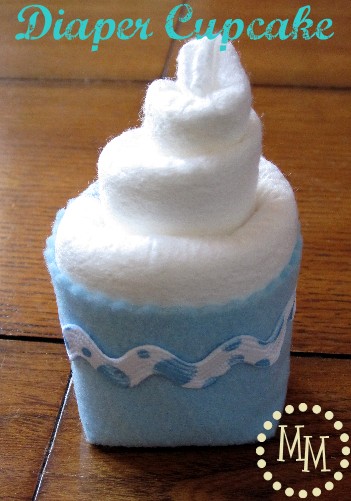 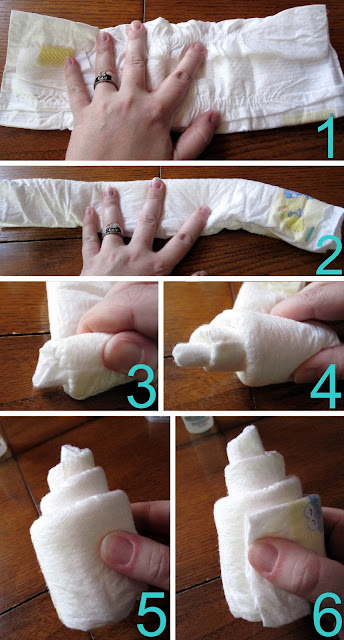 2. Fold the diaper in half lengthwise.

3. Start rolling the diaper tightly from the end without the cartoon image on it.

4. Roll at a slightly upward angle instead of straight across the diaper.

5. Front side of the diaper cupcake.

6. Back side of the diaper cupcake.

At this point, wrap the middle of the cupcake with a rubber band to keep it together. 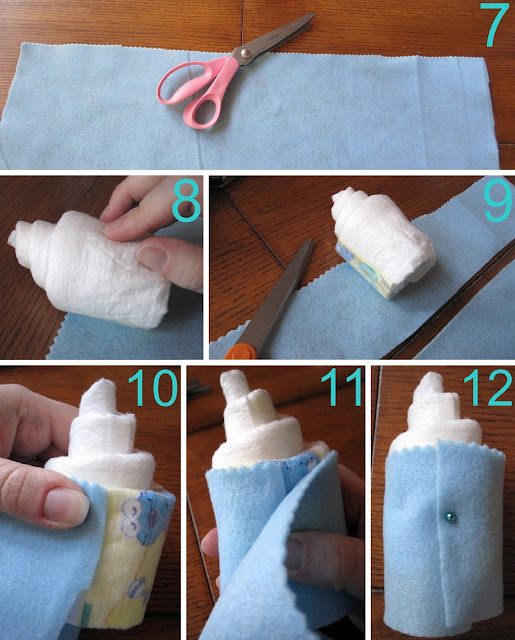 7. Cut across the top of your felt with the pinking shears.

8. Lay your cupcake on the felt level with the bottom layer of the wrapped cupcake.

9. Trim the felt ~1 inch from the bottom of the cupcake.

10. Start wrapping the felt from the back side of the cupcake.

11. Wrap the felt all the way around the cupcake.

12. Trim the felt so that there is a slight overlap with the bottom layer and pin it to the cupcake with a push pin. 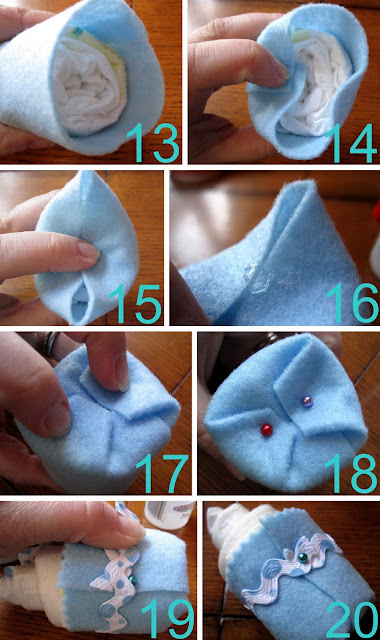 13. There should be about an inch of felt left at the bottom of the cupcake.

14. Fold in the side of the cupcake where to two side of felt come together.

15. Fold in the opposite side as well. Hold the two sides down with your fingers.

16. Put some adhesive on the felt where to two sides come together.

17. Fold down the remaining two sides on top of the adhesive.

18. Put a couple of push pins into the felt to hold it down while the glue dries. (Remove them once the adhesive is dry.)

19. Take your decorative ribbon and wrap it around the felt.

20. While holding the ribbon in place, remove the push pin from the felt and push it through the ribbon and felt. Trim off excess ribbon. 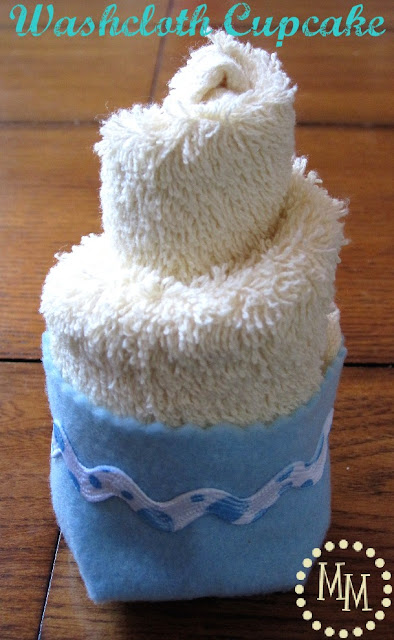 Next up, we’ll make a washcloth cupcake.

You can also use a burp cloth or small flannel blanket with this technique. 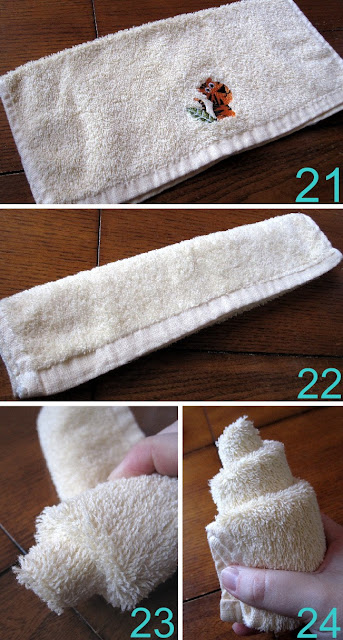 21. Fold your washcloth in half.

22. Fold again so that the washcloth is in fourths.

23. Start rolling at a slight upward angle as with the diaper cupcake.

24. Wrap the cupcake with a rubber band to hold it in place then follow steps 7-20 to make the liner.

My washcloth cupcake looks a little fuzzy because I borrowed one of my son’s to make this example. Its not a true baby washcloth. The thinner baby washcloths are way cuter! 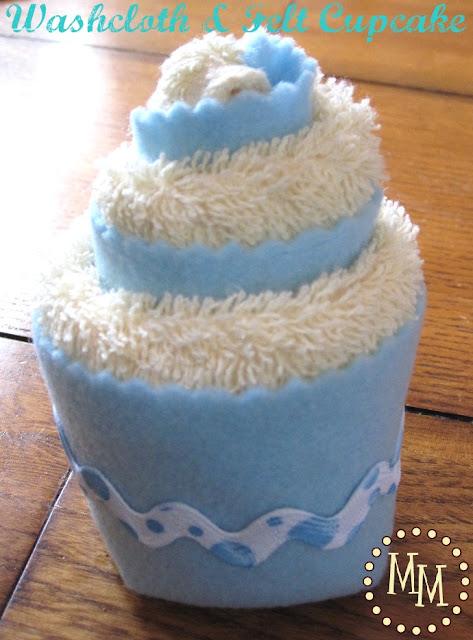 The extra piece of felt used in the wrapping to make this cupcake makes it thicker.

It’s what we used for a centerpiece for the baby shower. 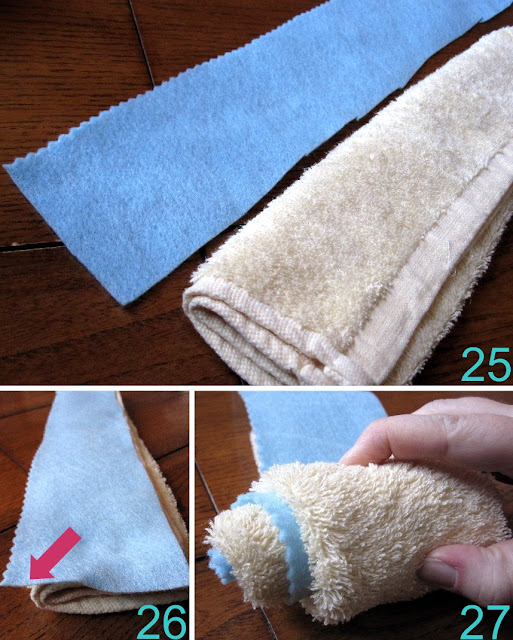 25. Cut a length of felt the same length as your washcloth or burp cloth. To make the felt more decorative, cut the top of the felt with pinking shears.

26. Lay the felt atop the folded washcloth and let it hang slightly over the top of the washcloth (pink arrow).

27. Roll at a slight upward angle and be sure the felt peeks through the rolled layers. Hold together with a rubber ban then follow steps 7-20 to make the cupcake liner. 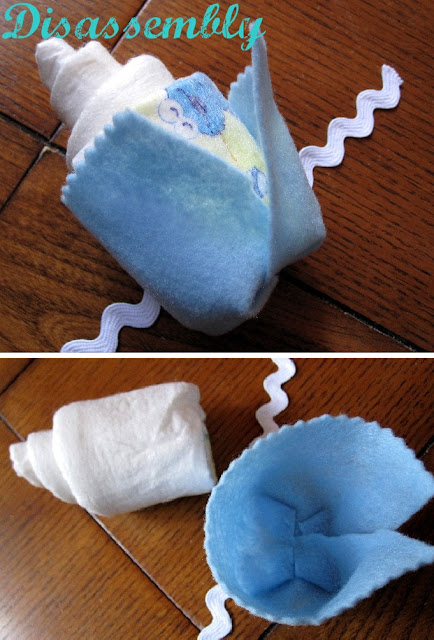 To take apart the cupcake simply remove the push pin holding the ribbon and felt together.

The cupcake will simply pull out of the felt.

Remove the rubber band and you have a new diaper/washcloth/burp cloth/flannel blanket for the new little one!

Will you give these diaper and washcloth cupcake tutorials a try for the next baby shower you attend?

I looked for pinking sheers but none have that edge :(

What kind of scissors did you use to get thaf scalloped edge? I've looked everywhere for fabric shears that do that! So far all I can find are decorative scissors for paper...definitely not strong enough for fabric.

Hi Mel! I just used pinking shears to get that look.

We used your tutorial to make the cupcakes for my sisters shower and they turned out beautifully. I shared it today on my blog. Thank you so much for the great post!

So cute!! Great tutorial! Thank you =)

Oh for cute! I know what I will be gving as a gift next time I get invited to a baby shower!