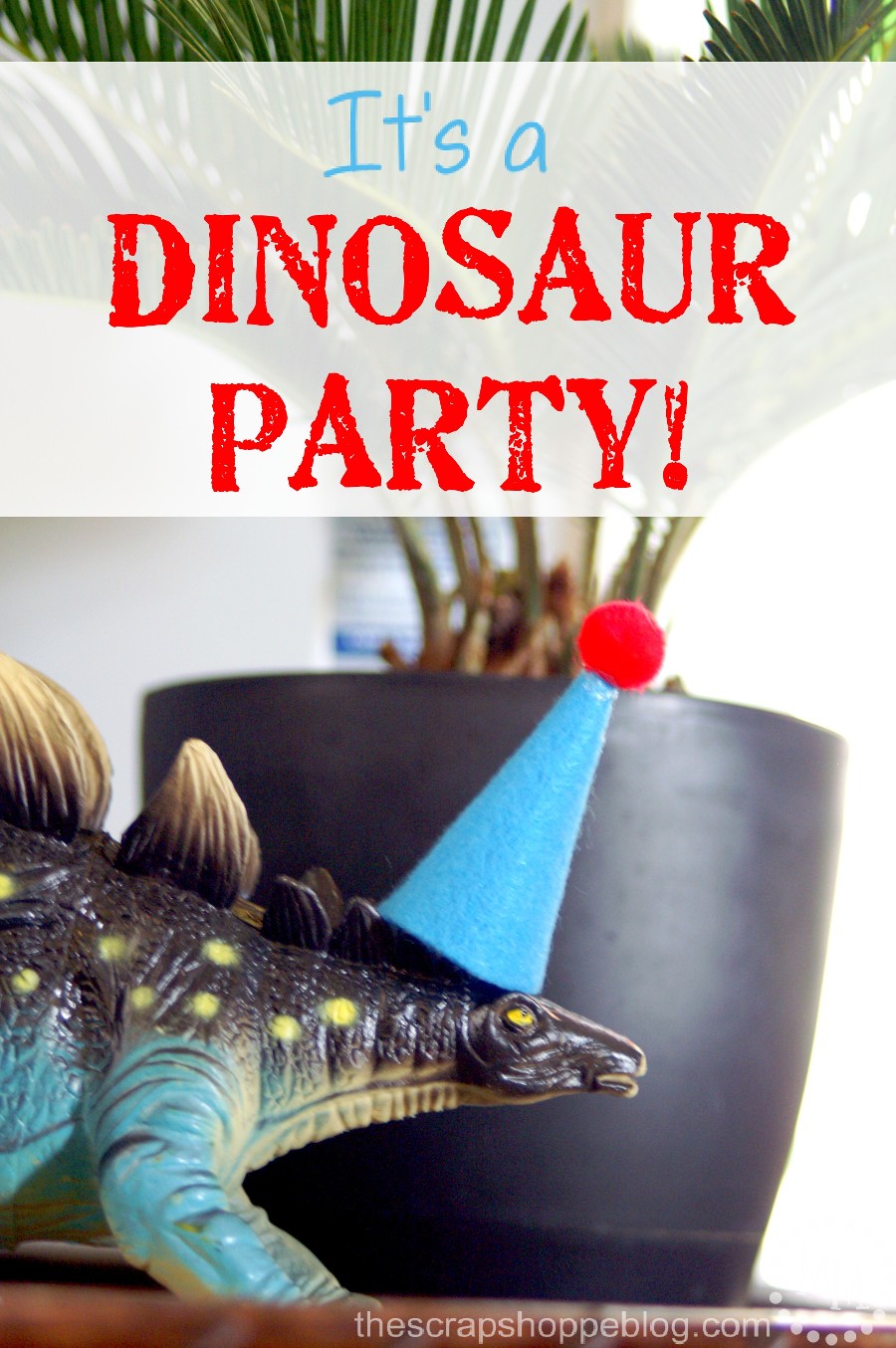 Earlier this week I shared my 3 year old’s dinosaur birthday invitations. Today I’m sharing all of the dinosaur party details!
There are so many directions a dinosaur party can go in. We went with fun dinos so as not to scare any of the kiddos. I designed a dinosaur party pack to match the invitations and based the color scheme of the party off of them. 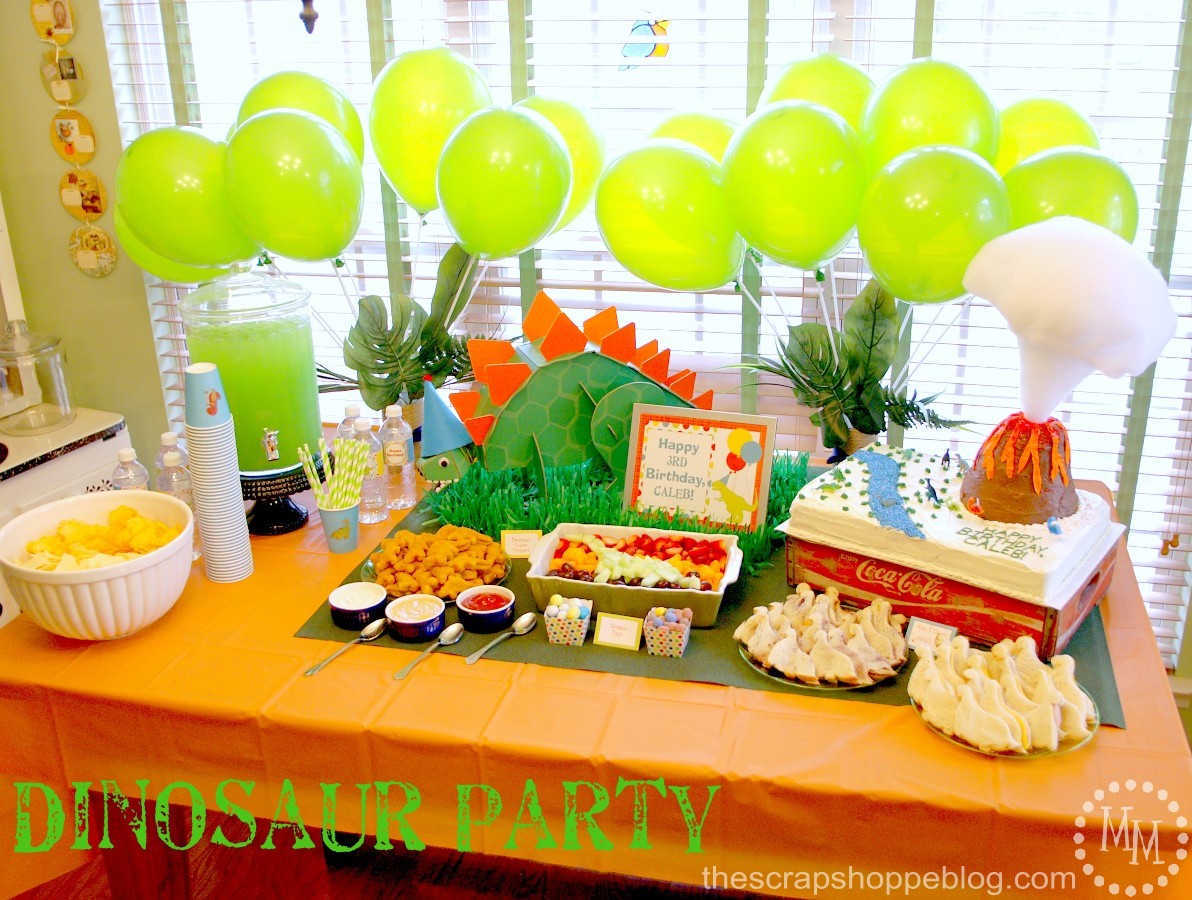 The table backdrop is one of my favorite features! I swear those balloons sticks I purchased several years ago have come in so handy. 16 green balloons help give the look of the jungle. Further helping the effect are a couple of fun foliage sprays I found at Hobby Lobby. 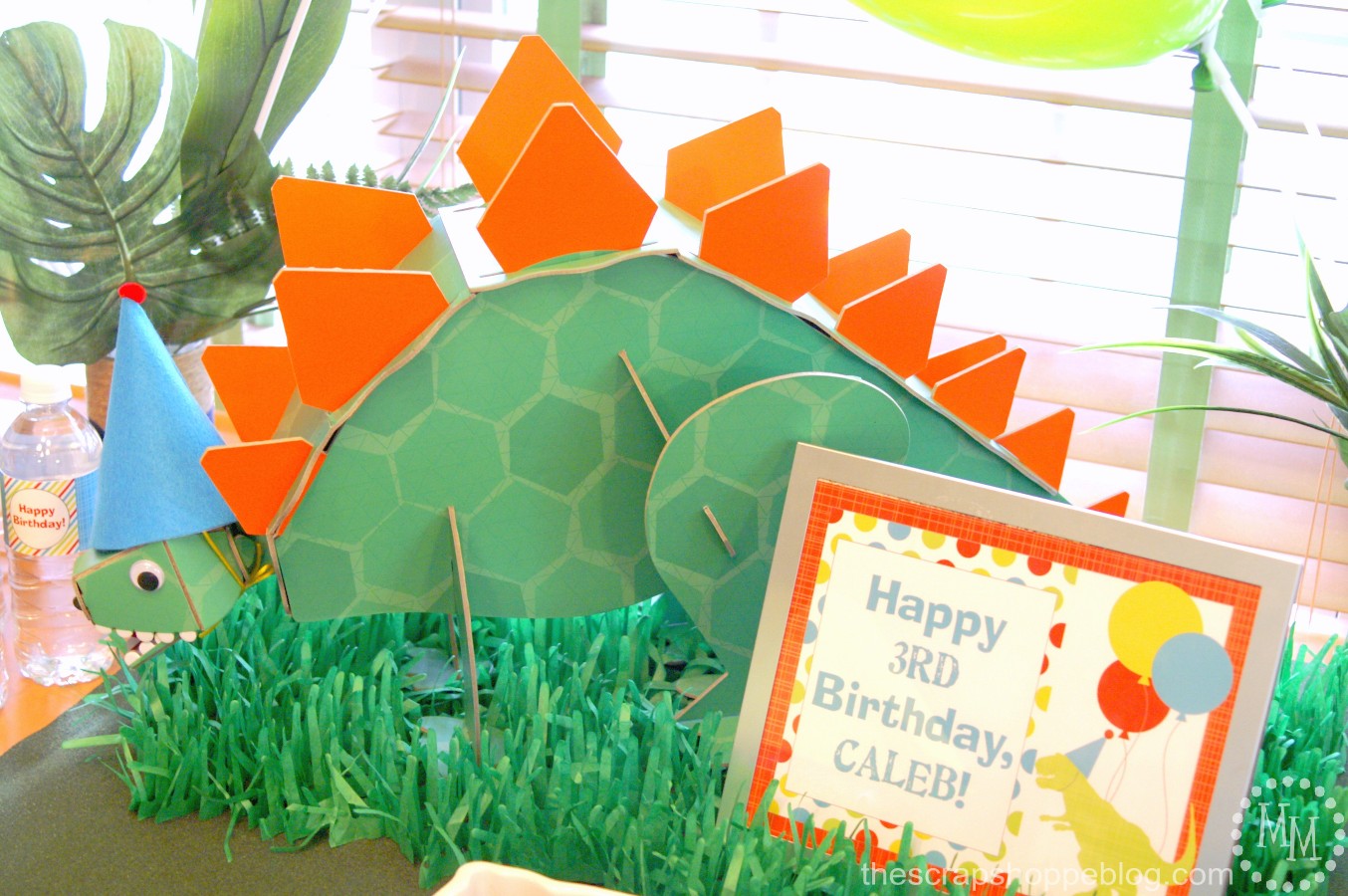 The centerpiece of the table is this adorable cardboard dinosaur. He was a splurge for the party but totally worth it in my opinion. Added bonus? He roars! Definitely a big hit with the kids! I made a little party hat for him to wear that matches the hat on the birthday invitation. 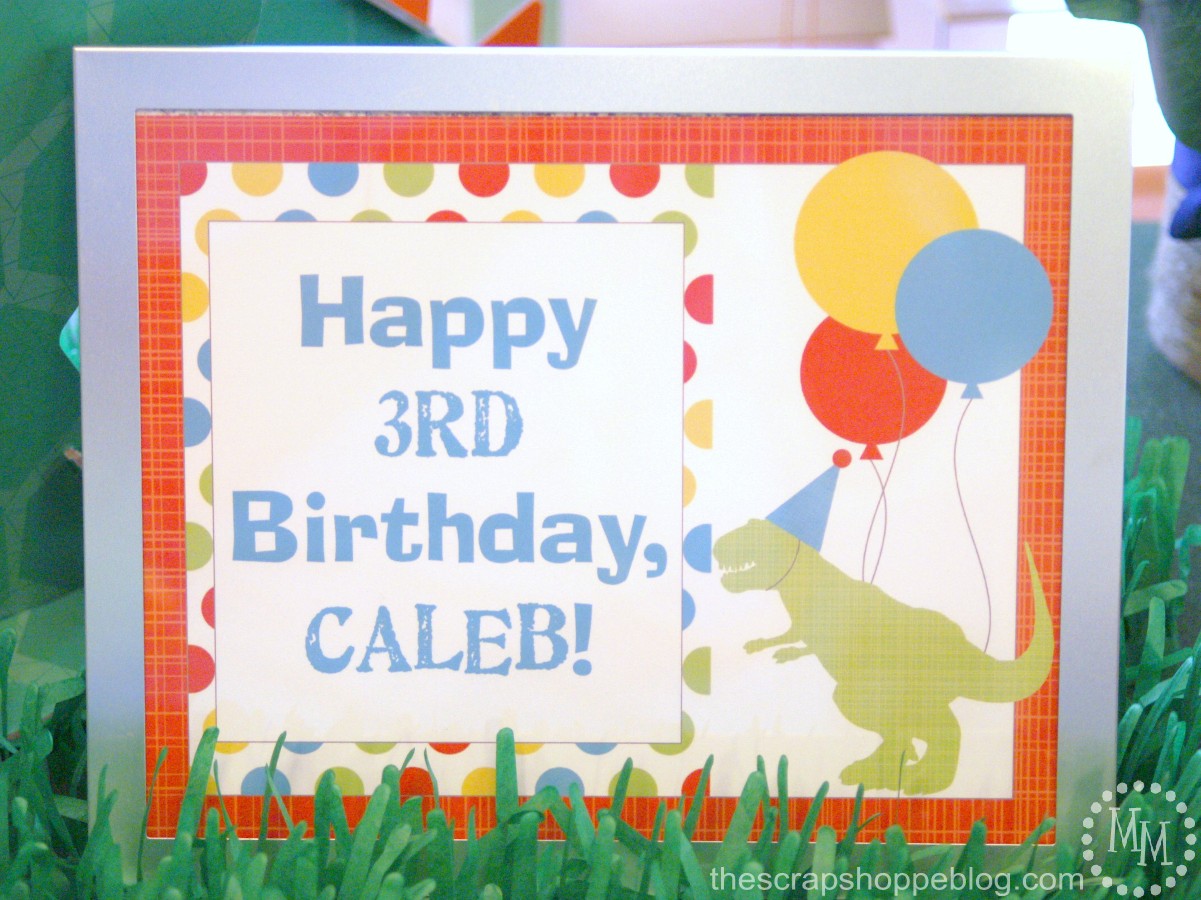 Part of the party pack includes a blank sign. I put our message to the birthday boy on it then framed it for the center of the table. 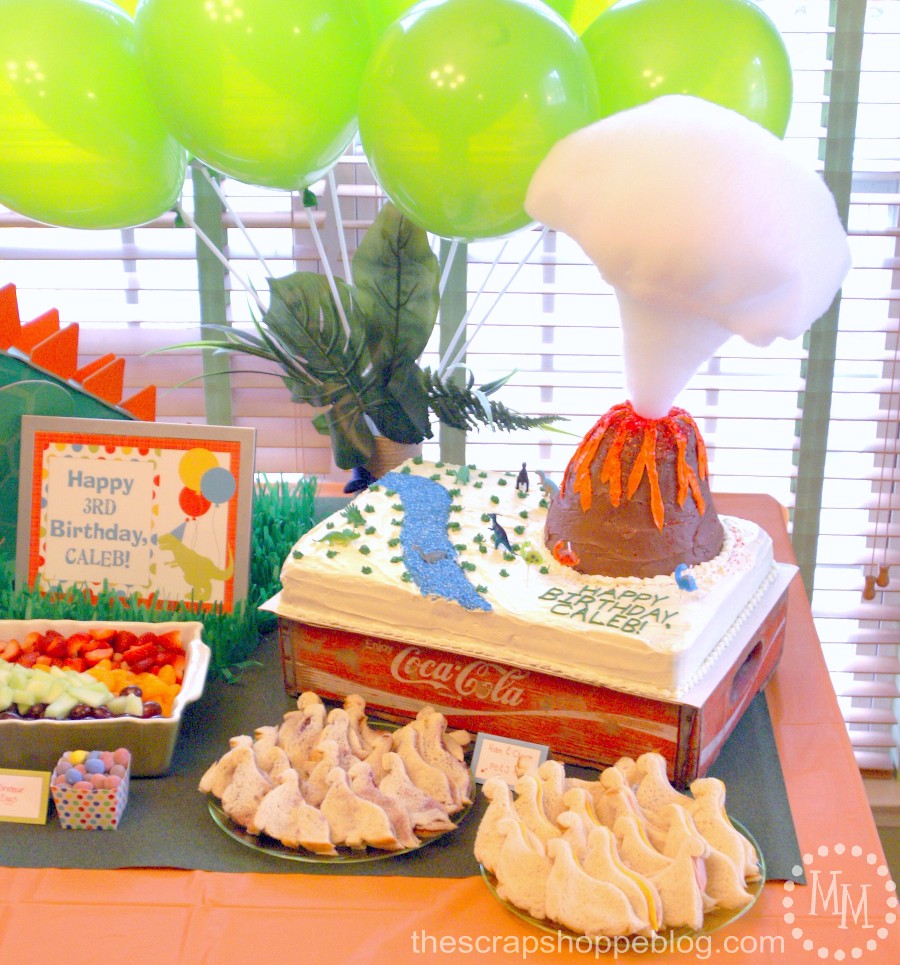 Everything on the table was dinosaur related. It is such a fun theme that coming up with ideas to incorporate dinosaurs wasn’t difficult at all! 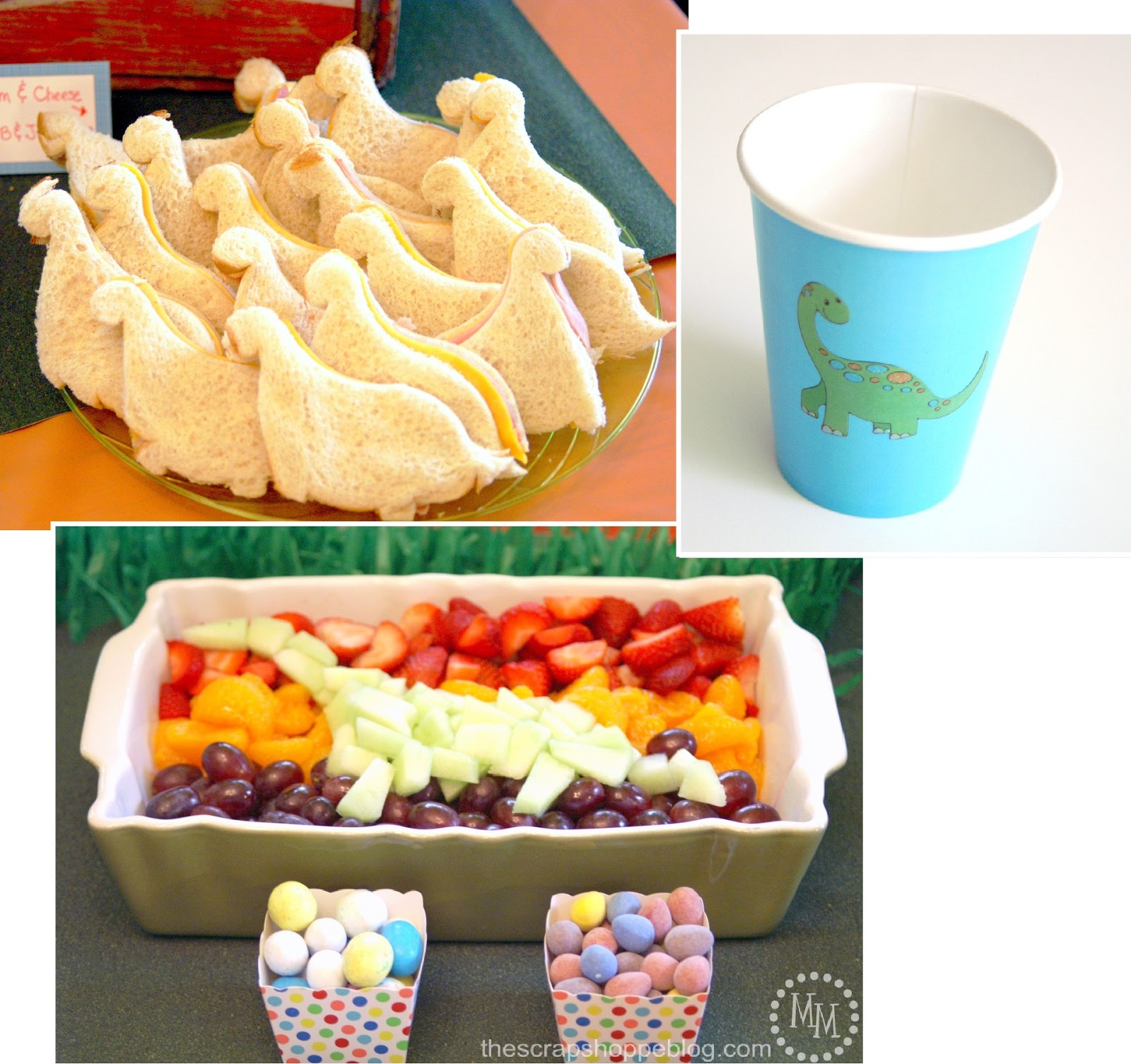 We had dinosaur sandwiches, Brontosaurus fruit, dinosaur eggs, and even dinosaur chicken nuggets!
I dressed up plain paper cups with dinosaur stickers. An easy fix and super inexpensive since the stickers were on sale. 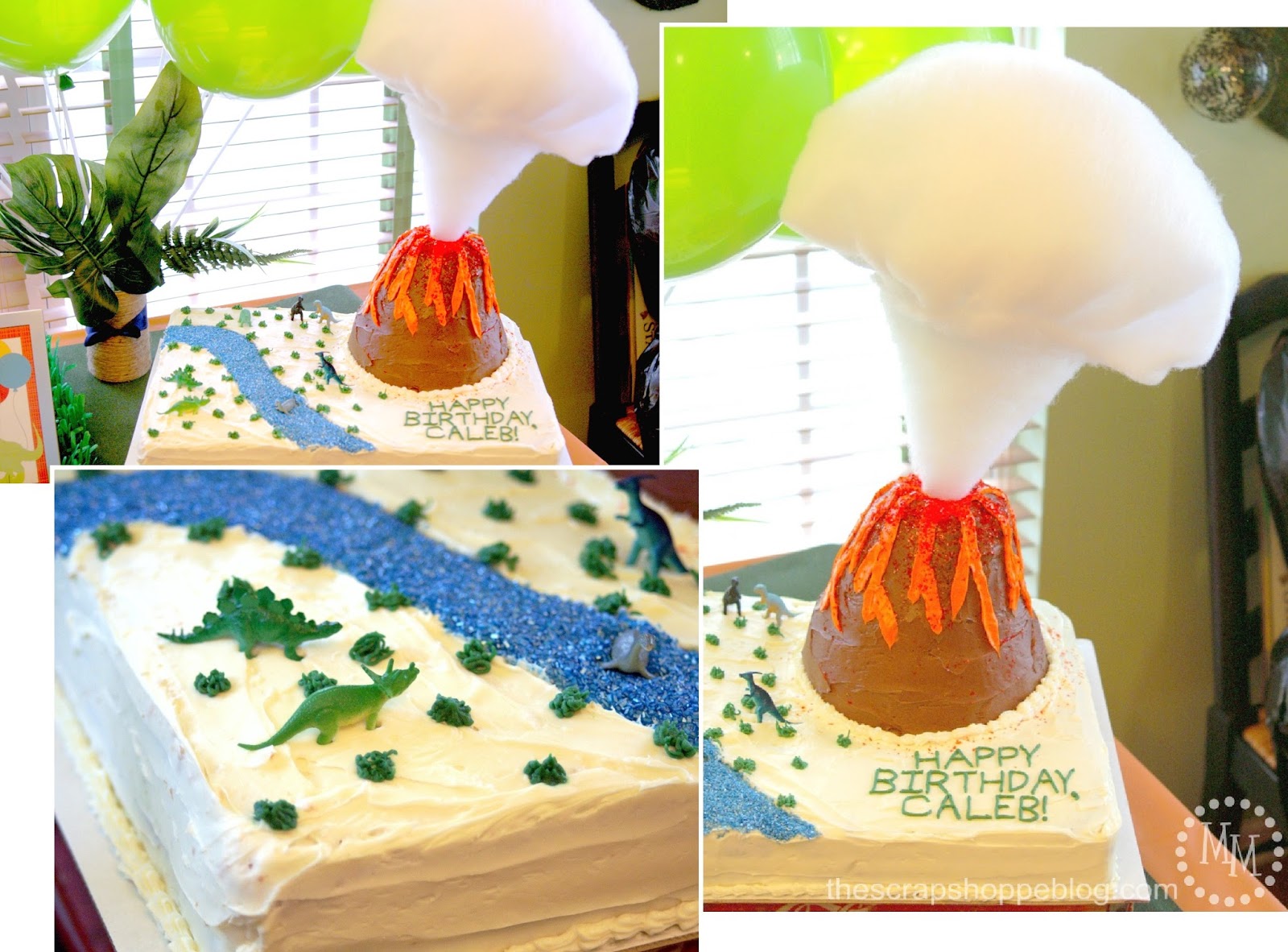 Now let’s talk about that cake!
When I think of dinosaurs, my mind naturally goes to volcanoes and extinction theories and whatnot. The birthday boy really liked the idea of having a volcano on his cake, so I worked hard to make that a reality.
The volcano is totally edible. It is layers of round chocolate cakes cut into a cone shape and covered with chocolate icing. I used orange icing for the lava as well as edible red flakes that I sprinkled over the icing. The volcano smoke plume is quilt batting wrapped creatively around bamboo skewers.
The remainder of the cake is made up of 4 sheet cakes, 2 side-by-side and stacked 2 tall. The river is blue sprinkles. The dinosaurs are from a pack of 72 that I found on Amazon. They are all ~2″ tall/long, and I used them all for various aspects of the party! 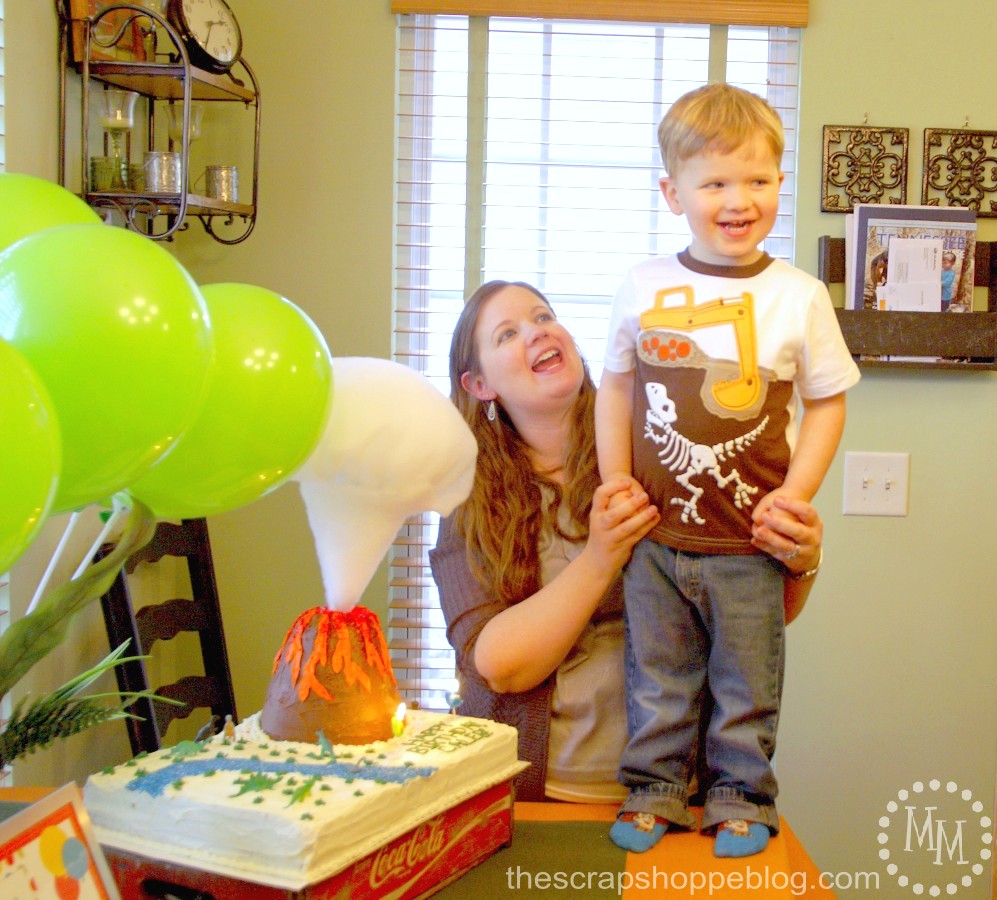 I do believe this little face, as we sing him Happy Birthday, pretty much sums up the party for him. He had so much fun which makes all the hard work incredibly worthwhile! I just love this little guy so much! 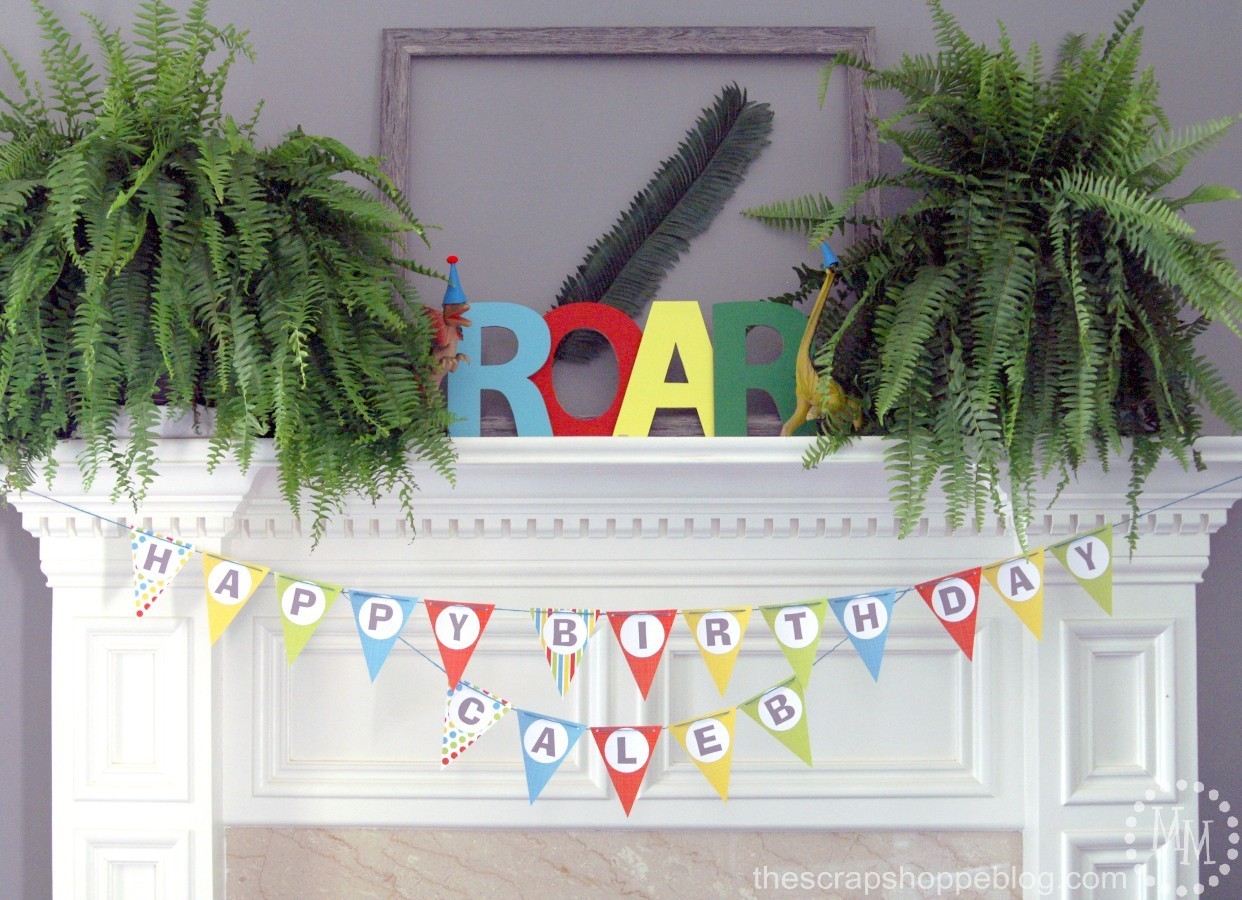 The mantel was decorated with a customized banner from the dinosaur party pack. I purchased a couple of ferns specifically for the party, but I will definitely be using them out on the patio now that the party is over. 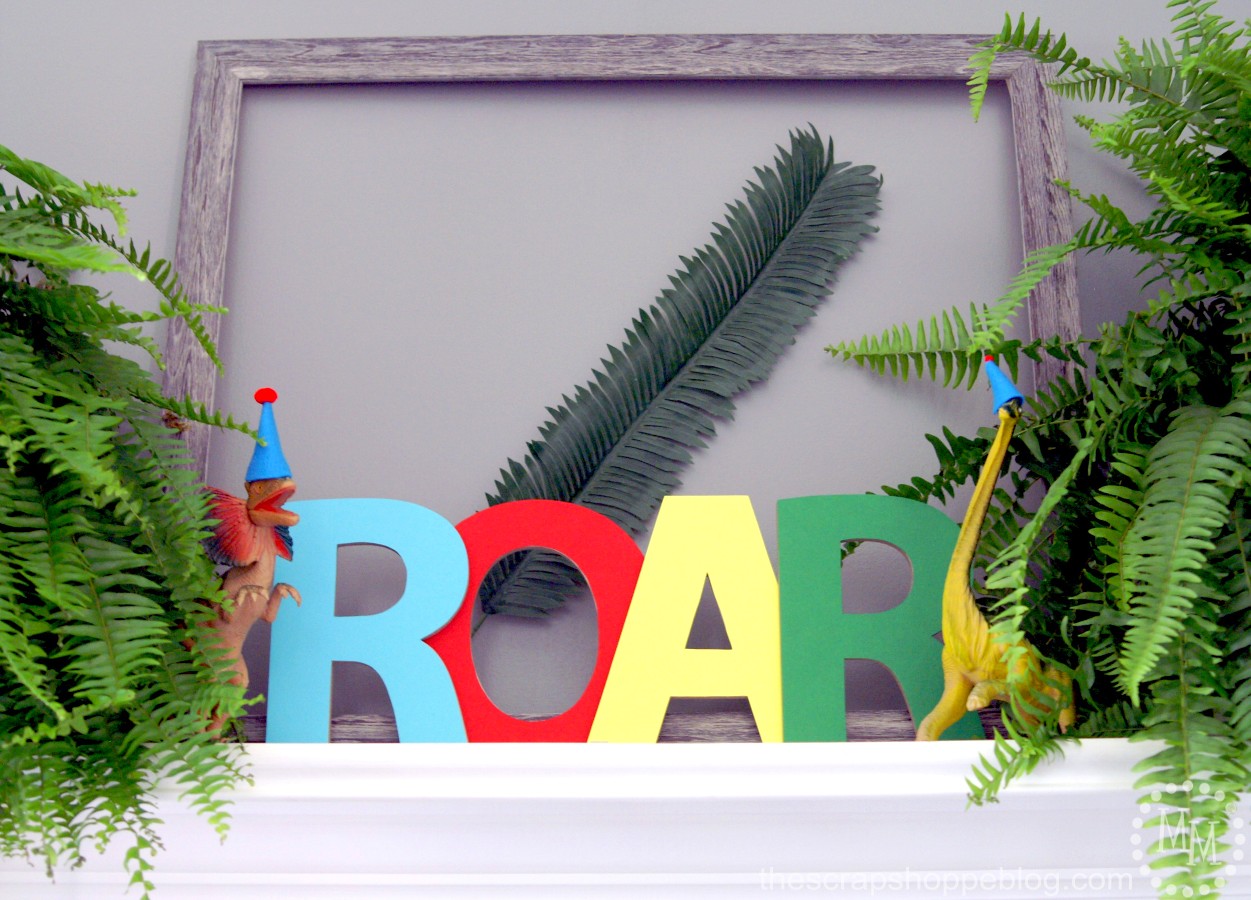 The ROAR letters are chipboard purchased at Hobby Lobby and covered in coordinating cardstock.
I used some of the dinosaurs the birthday boy already had to help with the decor. I even made them matching party hats. They are ready for some fun! 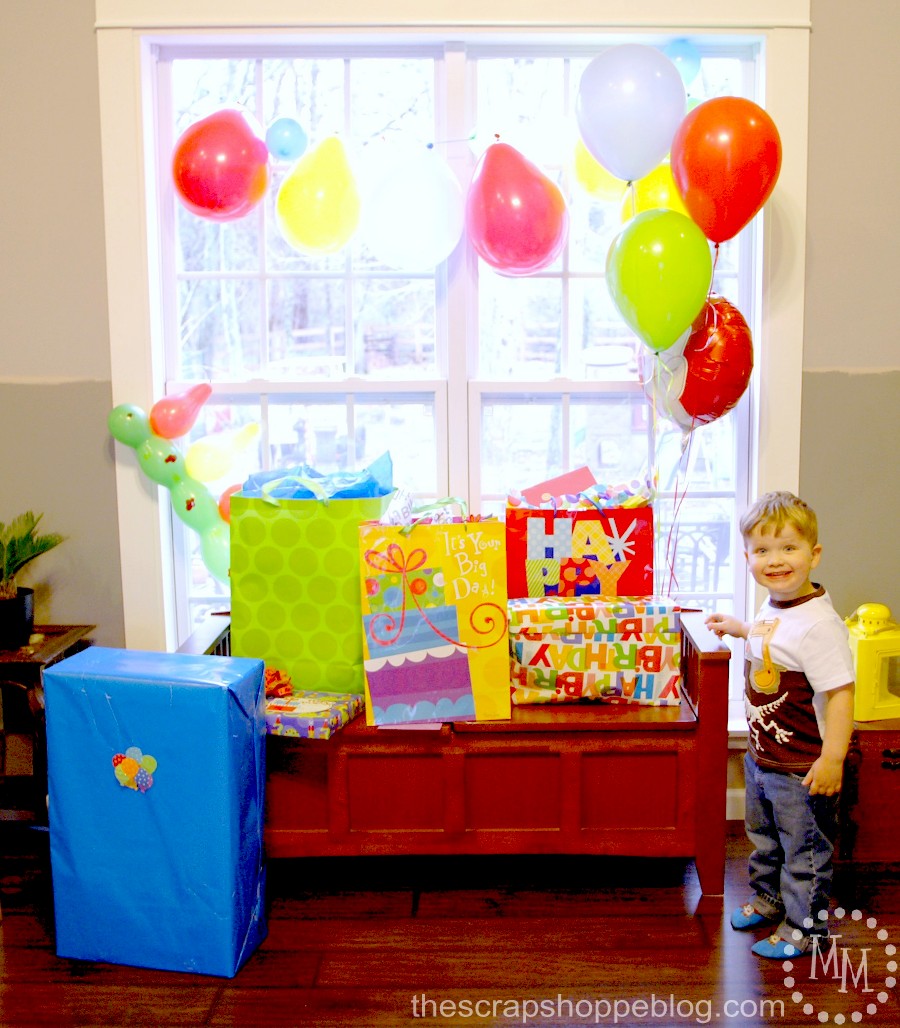 A very happy birthday boy with his presents!
Did you spot the balloon dinosaur in the background? I made him using balloons from the balloon mixed bag at Dollar Tree and Sharpies. 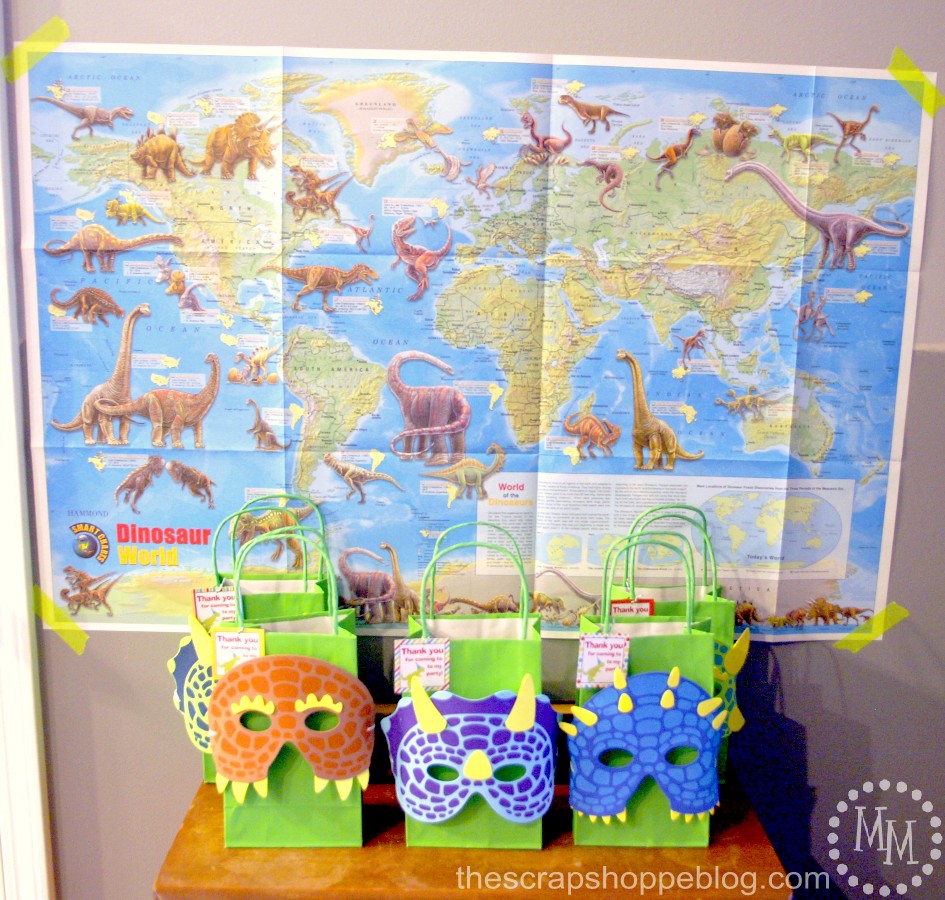 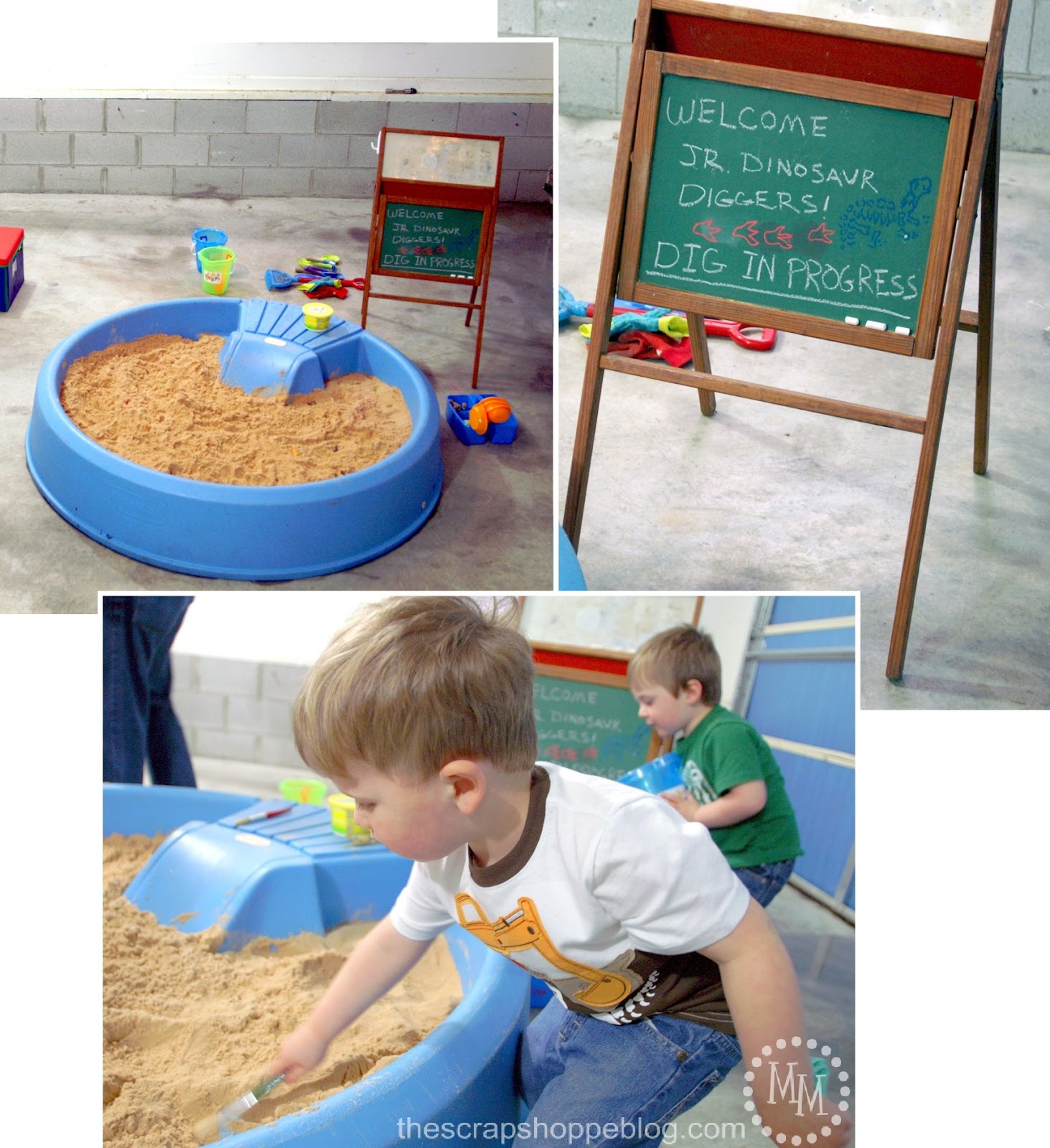 I really wanted to make a dinosaur dig for the kids, but the weather was so bad that day we didn’t really think we would be able to pull it together. Luckily we were able to get everything into the garage and the kids had.a.blast. digging in the sand. It was definitely a highlight of the party!
In the sand was buried dinosaur skulls, intact dinosaur skeletons, the little plastic dinosaurs, and dinosaur eggs.
I purchased inexpensive sand sifters and paint brushes for the kids to “excavate” with. 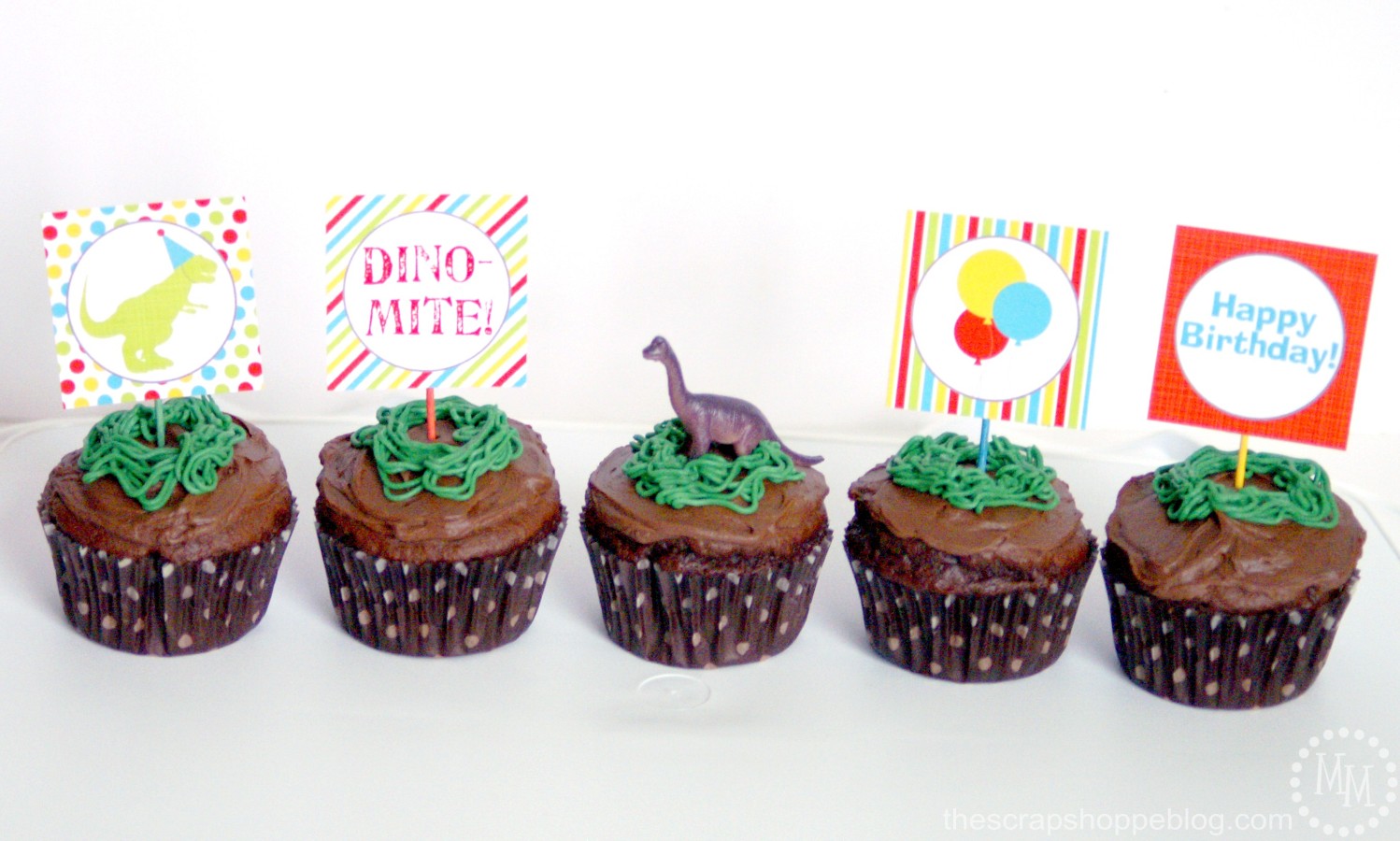 While we did not serve these cupcakes at the party, I wanted to be sure and include them in the write up.
These bad boys went to school with the birthday boy for his class to enjoy on his birthday. Again with the little plastic dinosaurs! They were the perfect size to sit atop the cupcakes on a little mound of green icing grass.
This was such a fun party theme to pull together and maybe one of the simplest to-date.
Linking up to Flamingo Toes, Today’s Creative Blog, The Shabby Creek Cottage, Tidymom, Whipperberry,
My Repurposed Life, 30 Days, Tatertots & Jello, Serenity Now, and other great parties found on my party page.