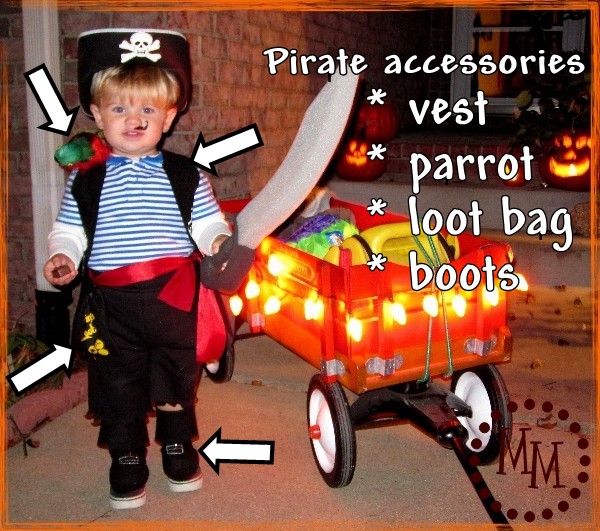 When you say “pirate,” I imagine an image comes to mind pretty quickly.

The pirate outfit, or pirate costume, is pretty distinct.

For this DIY toddler pirate costume, I was able to use a lot of every day items for his clothing like the striped shirt and cut up sweatpants.

He also already had a pirate hat, and I used some wide red satin ribbon from my craft stash as his sash around his waste.

That left the need to DIY some good pirate accessories.

So today I’m going to show you how I handmade them all!

For the record, this is my first time making any type of clothing so please don’t be too judgemental if I went about it wrong!

I started off with a very large piece of black felt and measured out the size of the vest using one of my son’s tank tops.

I traced the form out with chalk then folded the tank in half and placed it on each side of the already drawn form to create the front flaps of the vest.

Then I simply cut it out and made a jagged edge along the bottom of the vest.

Before stitching the tops of the armholes together (YES! I sewed! Are you impressed? I was!!) I tried the vest on my little guy.

The arms were a little snug so I opened them up a bit by cutting off more of the felt.

After that everything seemed to fit like a charm!

I finished stitching the armholes together and, viola! I had a black pirate vest!

Now to decorate it! 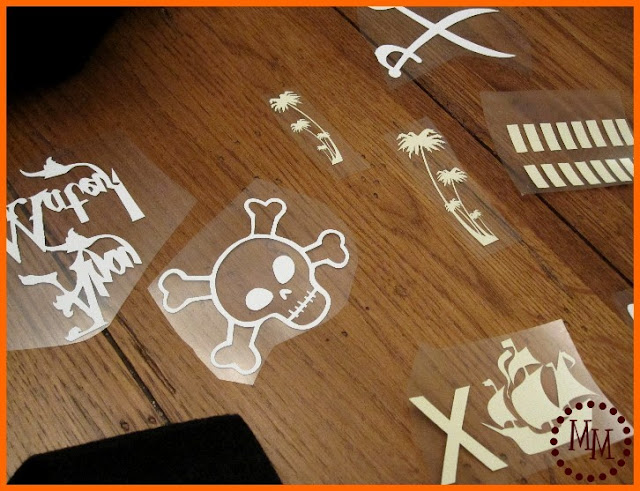 I knew the white and yellow heat transfer vinyl (affiliate link) that Silhouette sent me to try out would really pop on the black felt.

A quick image search of the Silhouette library and my own computer gave me several options for designs to use.

I used my Silhouette to cut all of these images out.

In the above photo, the skull, palm trees, and swords are from the Silhouette library.

The pirate ship, X, and all of the actual phrases are from my own fonts.

I have a slight font addiction!

The little rectangle tabs I simply created with the Silhouette software and repeated over and over again.

I simply laid down the images where I wanted them (the portions of the negative parts of the images that had been removed made each piece stick quite nicely to my material so I didn’t have to worry about sliding).

I covered the images with an old thin washcloth, applied the heat for about 60 seconds, and BAM!

I had my transferred images! 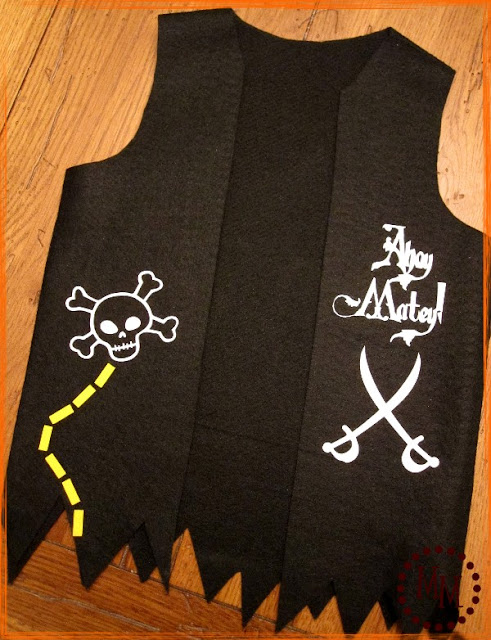 The front of the vest all decorated with pirate images.

I particularly love the crossed swords. 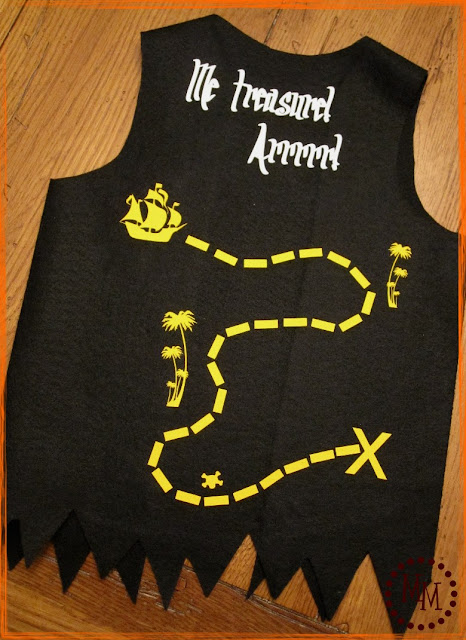 The back of the pirate vest has a fun treasure map. 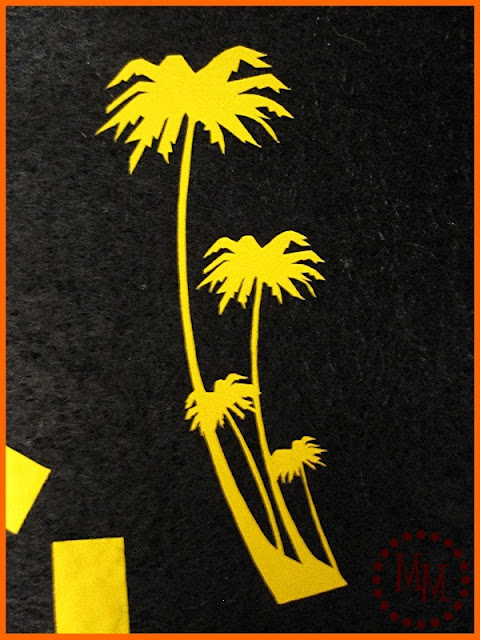 I love the detail that my Silhouette was able to cut in some of these designs!

Don’t they just pop on the black felt? 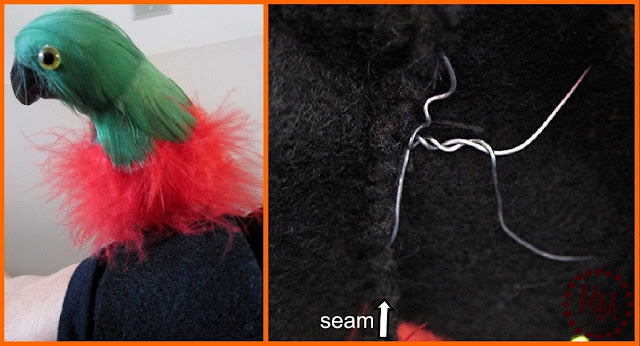 My aunt found this great lightweight parrot at Hobby Lobby.

I couldn’t for the life of me figure out how I was going to attach him to the vest until I finally noticed he had wire attached to his feet.

Once I discovered that, I simply threaded the wire through the seam at the top of the vest, twisted it together, and pushed the ends back through to the outside of the vest.

This way they wouldn’t poke my little guy, and they were hidden by the parrot’s tail. 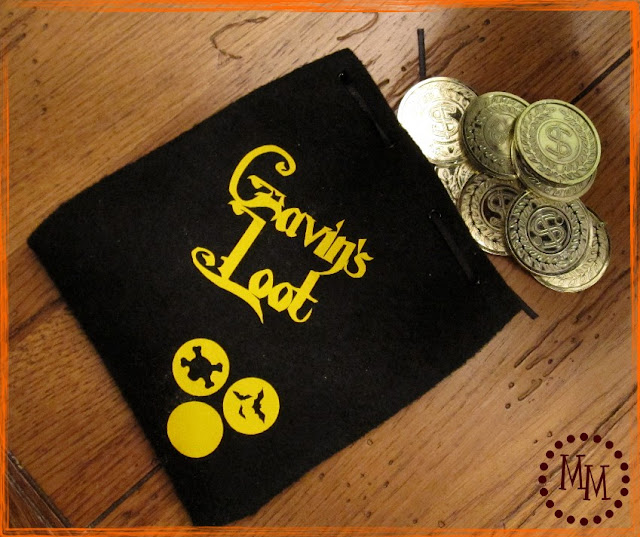 And what’s a pirate without his loot??

I simply took a rectangle of felt and folded it in half stitching up the sides.

I used more of the yellow heat transfer vinyl (affiliate link) to put my little guy’s name on the bag (we wouldn’t want his loot getting mixed up with anyone else’s!) and my interpretation of pirate coins. 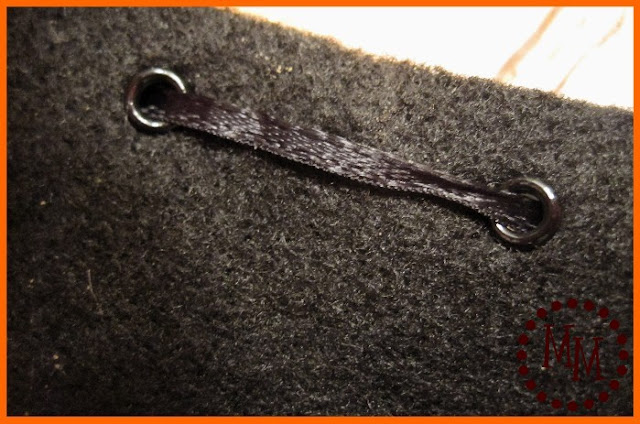 To cinch the bag and attach it to his belt, I punched holes in the felt with my Crop-a-dile (affiliate link).

Then I added eyelets and threaded some thin black ribbon through. 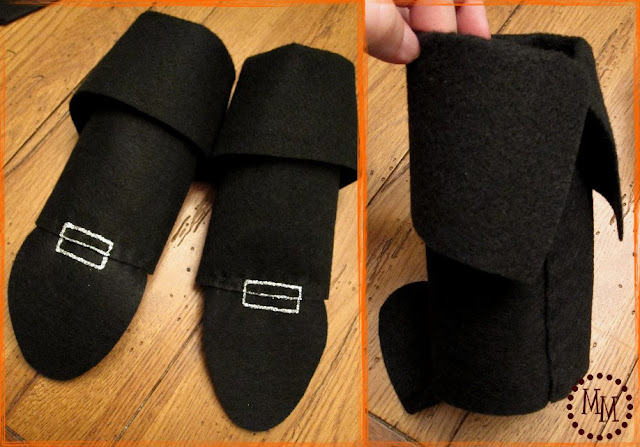 The pirate boots may be my favorite part!

They slide up the little guy’s leg and the flap on the bottom of the boot rests on top of his regular shoes giving the illusion of boots!

To make these I simply took a rectangle of felt and stitched it into a cylinder, but only stitching about 2/3 of the way up the boot.

Then I was able to fold down the part of the felt I hadn’t stitched to look like a real pirate’s boot.

For the shoe flap, I actually took the scrap armholes I had cut out of the vest and trimmed them down to size and stitched them to the bottom of the boot cylinder. 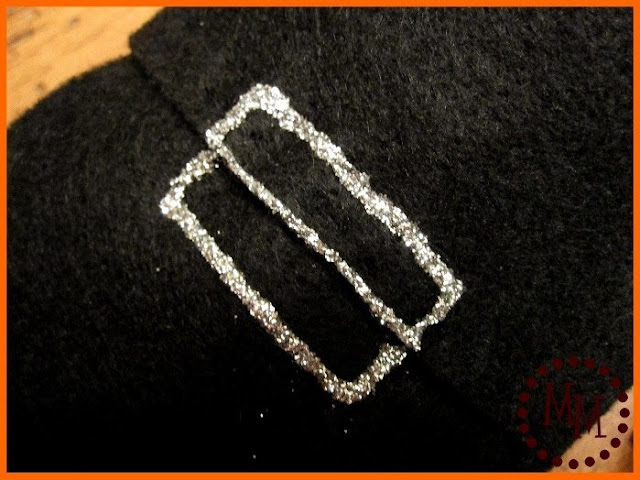 To make the buckle I used silver glitter glue.

I just drew the buckle shape and waited for the glue to dry. 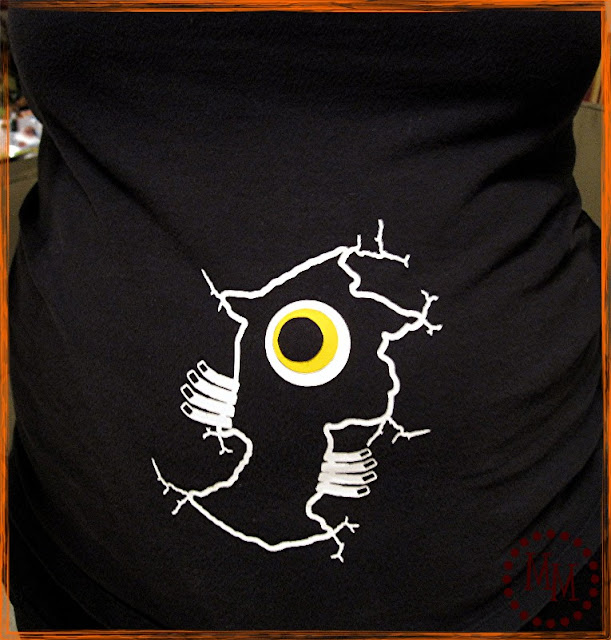 I also used the heat transfer vinyl (affiliate link) to create my own Halloween shirt.

Since I was pregnant with baby #2 at the time, I made a little one-eyed beastie look like it was trying to escape my belly.

I drew the image myself on the computer and used the Silhouette to cut it out. 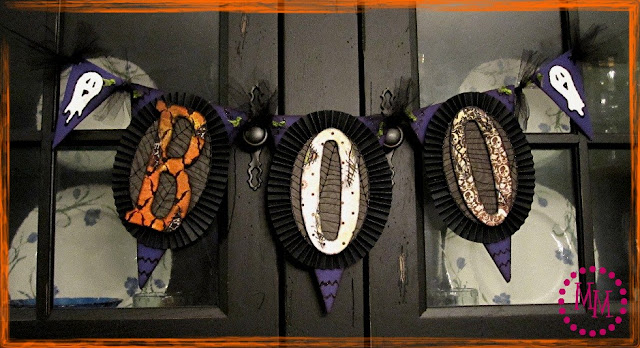 And remember my BOO Banner? 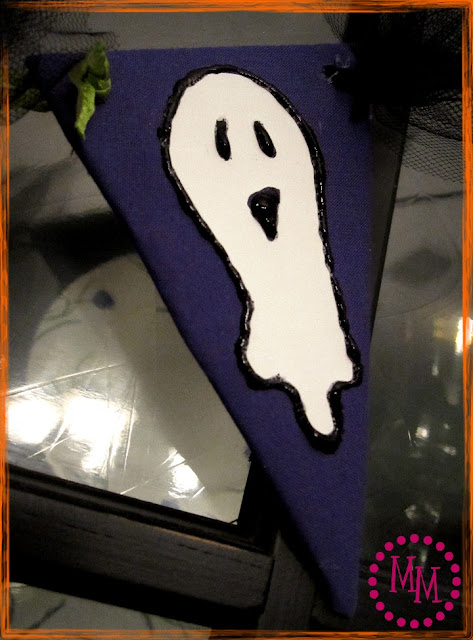 The heat transfer material is thin enough so that you really don’t have to add a lot of pressure with an X-acto knife to cut through.

So many fun Halloween ideas!

Will you try to make a DIY toddler pirate costume?

Or maybe a grown up version?

Adhesive vinyl is definitely the way to go when it comes to adding decoration to a costume.

How cute is that!?!? Thank you for linking up to my All Things Spooky series! xoxo!

Tammy@ Not Just Paper and Glue

that turned out AWESOME! come link up at handmade tuesday sometime! www.ladybug-blessings.com

WOW! I am so impressed, you little seamstress you!! This vest is adorable, and I love that you used felt. All those details are just fab!

This is super cute...making me want the machine more and more!