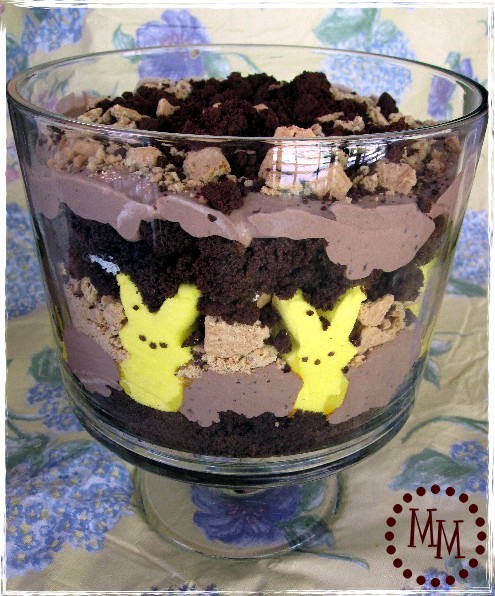 I know this trifle may look a bit… odd?
Those poor Peeps buried under mounds of chocolate cake and pudding.
But trust me when I say, it tastes absolutely delicious!!
And its pretty popular with the kiddos.
Recipe for S’mores Trifle (adapted from this recipe).
Ingredients
1 (18 oz) chocolate cake mix
1 can lemon-lime soda
2-1/2 cups milk
2 Tbsp milk
2 (1.4 oz) instant chocolate pudding mixes
1 (8 oz) carton Cool Whip, thawed
1 bag semi sweet chocolate chips
14 graham crackers
1 (7 oz) jar marshmellow creme
1 package PEEPS bunnies (optional)
Directions
1. Combine cake mix and lemon-lime soda in a large bowl; beat until creamy. Line a cake pan with aluminum foil and spray generously with nonstick backing spray. Pour in combined cake mix. Bake at 350 degrees for 30-35 minutes. Allow to cool completely.
2. Whisk the pudding mixes and 2-1/2 cups of milk in a large bowl for 2 minutes. Let stand until set. Gently fold in Cool Whip.
3. Melt chocolate chips in the microwave (1 minute at a time to avoid burning the chocolate). Once melted, add 2 Tbsp milk and stir in. Chocolate will become clumpy. Rake with a fork to break up large chunks.
4. Crush graham crackers in a large sandwich bag into coarse chunks.
5. In a trifle bowl, (a) cut up or crumble approximately half of the cake for your first layer.
(b) Place PEEP bunnies around the edge of trifle bowl, letting them sit on chocolate cake layer.
(I used 9 bunnies.)
(c) Top with approximately half of the pudding mix.
(d) Next, add half of the crushed coarse graham crackers.
(e) Crumble 1/2 of chocolate mixture on top of the graham crackers.
(f) Spoon on 1/2 of marshmellow creme.
Repeat steps (a) and (c).
Decoratively crumble graham crackers and chocolate mixture to top off the trifle.
6. Chill for at least an hour before serving. 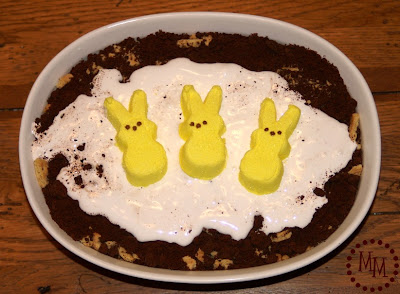 I ended up not being able to use all of the 2nd half of the cake or pudding to finish off my trifle so I used it to and my other remaining ingredients to make a separate trifle that was set aside just for the hubs for his birthday. Topped with 3 of the leftover PEEP bunnies. You wouldn’t even believe how excited he was when he found out there was more!  🙂
This is definitely a fun recipe for summer!
And a fun way to use up those extra PEEPS from Easter!