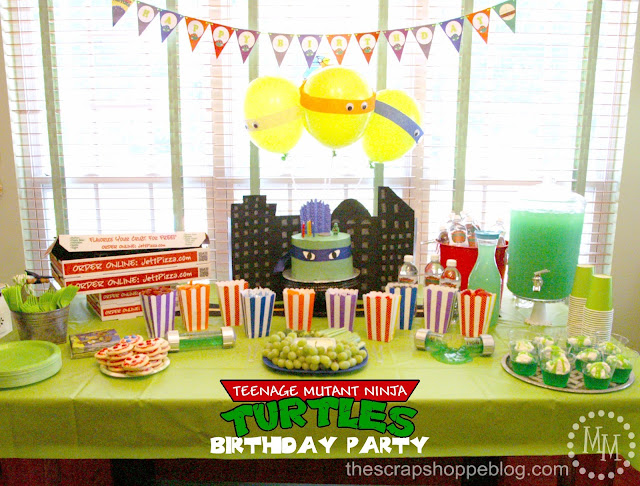 Its time to finally share all of the fun details of my son’s 5th birthday party!
Cowabunga, dude, we totally had a Teenage Mutant Ninja Turtle theme with green playing a major role in the party decor.
I said it before, and I’ll say it again: I can’t believe the Turtles have made such a comeback!
But come back they have, and my little guy is a little obsessed with them.
So let’s get to those party details! 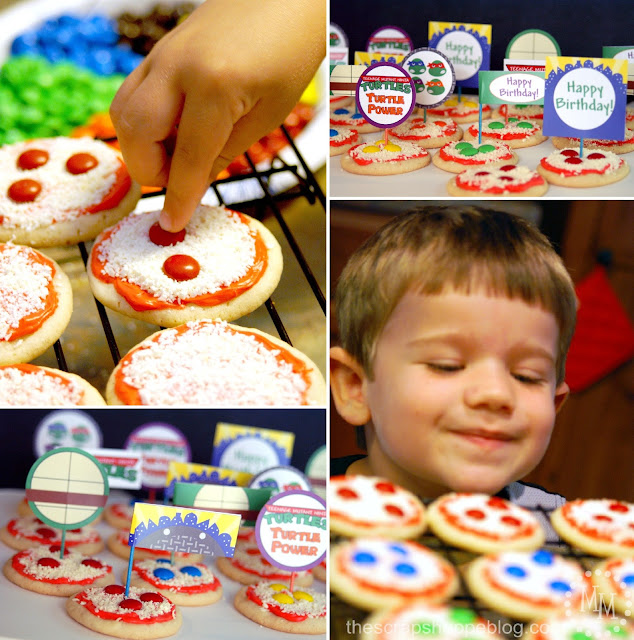 First up, let’s backtrack a tiny bit. My son’s actual birthday was last Tuesday so we made a special treat for him to take to school for his classmates to enjoy. We decided the typical cupcake just wasn’t proper Turtle style.
So we went with mini cookie pizzas!
We made these together which made for a very excited birthday boy. He loves to help in the kitchen!
We used a sugar cookie base, then decorated them with red frosting and grated white chocolate.
To finish off our toppings we added M&Ms.
I created some cupcake toppers (and other party accessories) to match the birthday party invitation,
and we placed those on the pizzas. 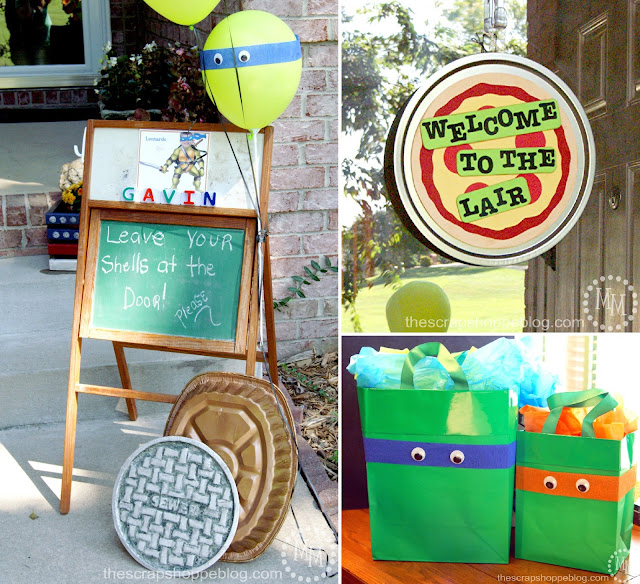 The day of the party, I set up a greeting on the front walk. Included were a printed image of my son as “Leonardo,” his favorite Ninja Turtle (he loved that!), and a whimsical message on the chalkboard to “leave your shells at the door.”
I made a turtle shell from an oval aluminum roasting pan I picked up at the Dollar Tree. I brushed on a coat of green acrylic paint, allowed it to dry, then spray painted it brown. The coat of acrylic paint was a necessary step to help the spray paint remain adhered to the pan.
I also made a couple of manhole covers to use in the party decor, one of them being used with my entry display.
It only costs $1 to make!
I used a $1 pizza pan and scrapbook paper to create a pizza sign to go on the front door
welcoming our guests to the “lair.”
And, finally, I decorated some gift bags for the birthday boy’s presents to go in with some green bags, crepe paper, and large googly eyes. He loved these!! 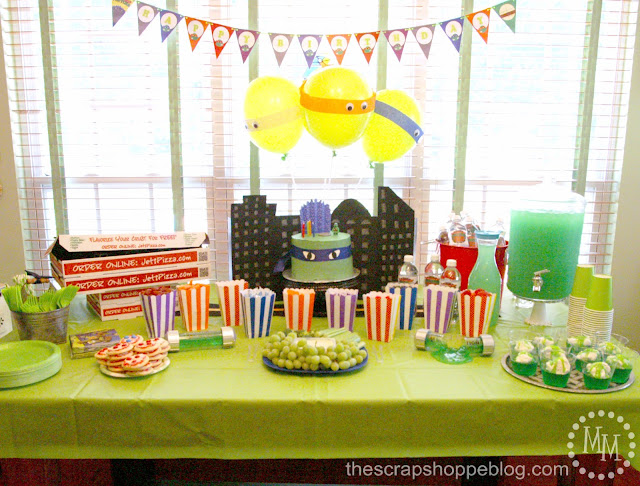 The tablescape of the party had a decisively green theme.
For the back drop, I created a Ninja Turtles birthday banner and used green felt sticker alphas to spell out happy birthday. The green balloons were wrapped with crepe paper with googly eyes to emulate the 4 Ninja Turtles. And the cityscape backdrop is from my son’s superhero birthday party last year. We used it as part of the photo booth decor!
It seemed only appropriate to serve pizza at the party. I also made more mini sugar cookie pizzas and served green vegetables as well as red, blue, purple, and orange fruits and vegetables. 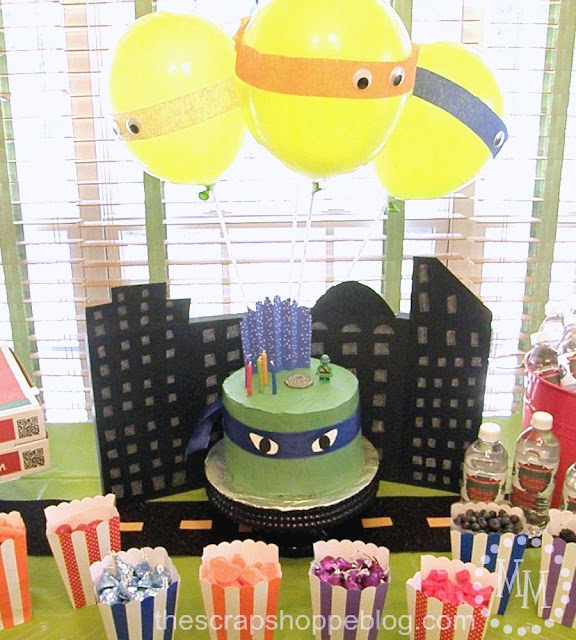 I also found blue, orange, purple, and red candy to serve with the cake.
The popcorn bags are from Party City.
And how about that cake??? More on that in a minute… 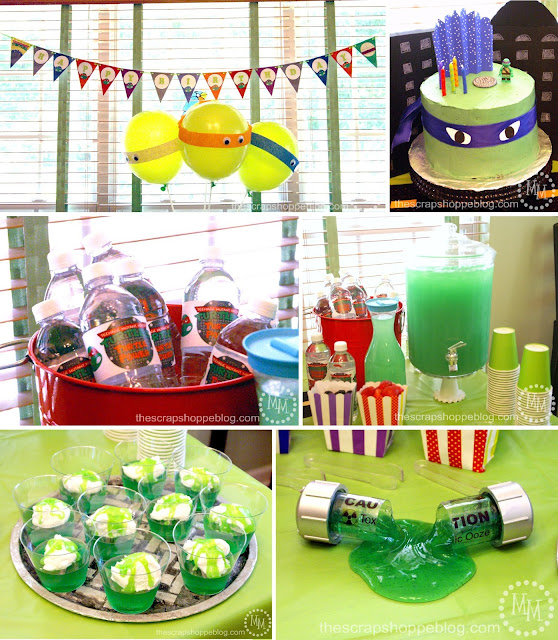 We also had “toxic” lemonade which we tinted green with food coloring. I made Ninja Turtle water bottle wrappers for the bottled water. I also whipped up some “toxic” Jello which was lime Jello topped with Cool Whip and drizzled with neon green frosting. It was a big hit, and you can see it was served on one of my homemade manhole covers.
My son and I also created “toxic ooze” to be used for the party and given to his little party guests.
More on that soon… 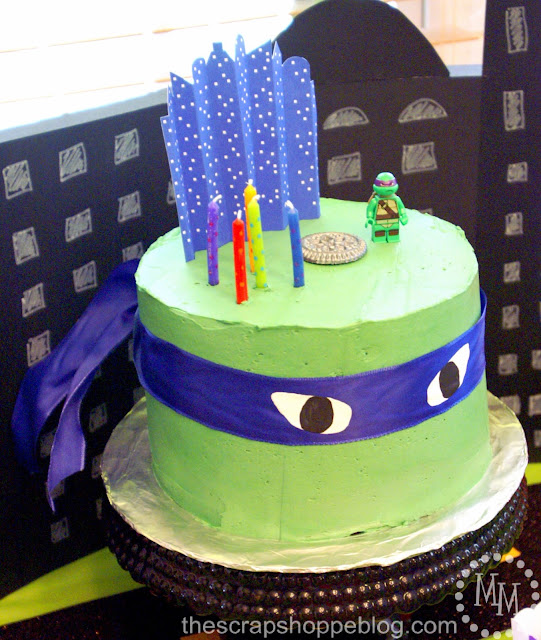 So… how about that cake???
I found a fun idea for making the cake itself a Ninja Turtle head (you can see all of my party inspiration here). The example used fondant for the Turtle mask, something I wasn’t willing to attempt. So I used blue ribbon and painted the eyes on with acrylic paint. Quick, easy, and definitely looks better than any attempt I would have made with fondant!
I made a cityscape cardstock topper using the same cityscape found on the birthday invitations.
I took apart a cream-filled cookie and spray painted 1 half of the cookie silver with the some leftover food-safe spray paint from my youngest son’s Cars birthday party back in March.
The cookie is acting as a manhole cover for the Lego Ninja Turtle to jump in to!
I found some candles with the same color scheme as the party.
The cake itself is 3 layers of chocolate cake with store bought chocolate icing between the layers.
The green icing is homemade buttercream tinted with green and a tiny bit of red food coloring. 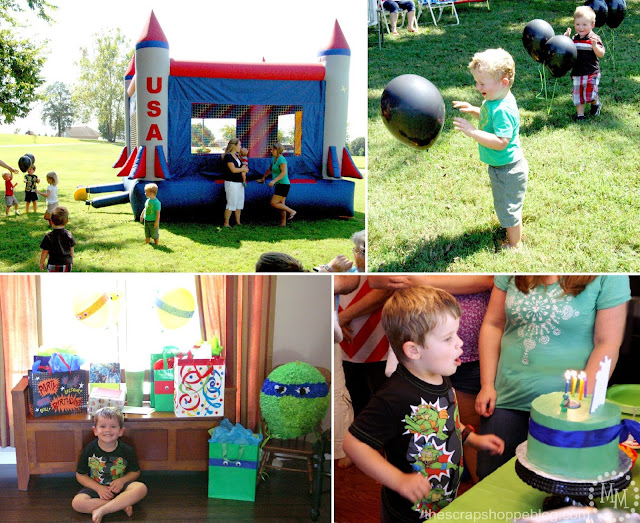 This year we had a new and last minute addition to the birthday party. A jump house!
It was completely my husband’s doing. His idea and his phone call. But what a good call it was!
The kids had a blast in it and the rental company didn’t pick it up until the following Monday morning.
My boys were beyond thrilled to have it for the weekend!
I also had some helium filled black balloons that the kids could use to practice their “ninja” skills.
They had so much fun beating on those balloons! 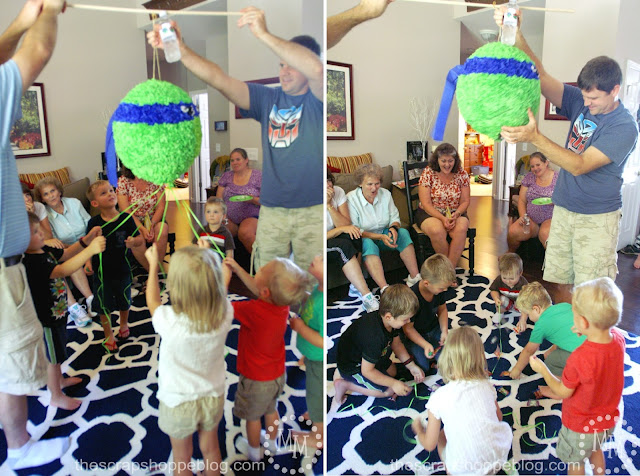 Another new thing for this party was a homemade piñata!
And this may be the last piñata made in the McDonald house.
It was super time consuming and a complete labor of love, but my birthday boy did love it a LOT!
I made it using a punch balloon as my template because of their round shape and created a paper mache mold around it using newspaper strips dipped in a flour, salt, and water mixture. Just this step took several days because of the size of the balloon and drying time. By the time this step was done I knew I didn’t want any kids coming at the piñata with a baseball bat! So I cut the candy flap, filled the piñata, and tied on some strings the kids could pull to release the candy.
To decorate the piñata, we (thanks for all of the help, mom!) used squares of folded crepe paper that were glued on with decoupage.
Pulling the strings to release the candy worked perfectly!! The flap was completely torn off in the process, but the rest of the piñata remained perfectly in take. (Insert big sigh of relief!) 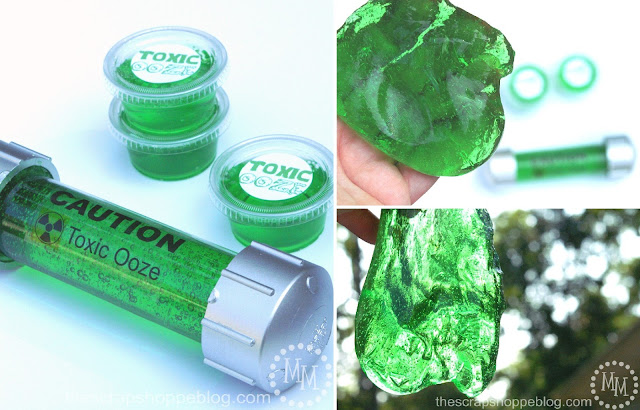 Now more info on the toxic ooze!
This was SUPER fun to make and my birthday boy loved helping.
We used a recipe involving borax and clear Elmer’s glue. You can find the recipe here.
I also used the idea on the recipe’s website to make canisters for the ooze that I could use on the party table.
Like the website suggested, I used an empty soda bottle for the tube, but used PVC caps for the ends. They were much cheaper than the ABS fittings in the example. I spray painted them silver and I think they turned out PERFECT!! I hot glued one end of the soda bottle to one cap, filled it with the ooze, then hot glued on the other cap.
I made the Toxic Ooze label for the canister in my drawing program and printed it on an
adhesive-backed transparency sheet. 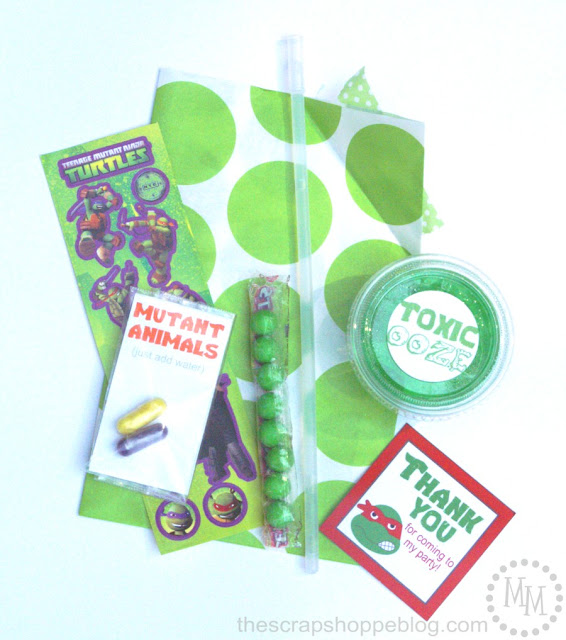 For the gift bags I included TMNT stickers, candy, a green glow bracelet, a small container of the toxic ooze, and “mutant animals” (using an 18-pack of capsules from the Dollar Tree that blow up into animal-shaped sponges when added to water). 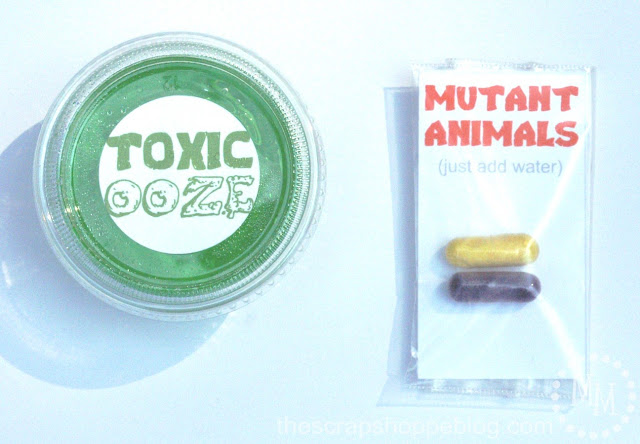 I have a FREE PRINTABLE for you if you decide to throw a Ninja Turtle party!
You can download the Toxic Ooze and Mutant Animals labels to use for your party.
Download the PDF version here.
The file will print on 8.5 ” x 11″ paper (I recommend cardstock).
Use a 1.5″ circle cutter to cut out the toxic ooze labels.

All in all it was an AWESOME party, if I do say so myself! Everyone seemed to really enjoy themselves and my big birthday boy couldn’t have been happier. 🙂
The Ninja Turtle Party Pack is available for purchase in my Etsy shop.
Linking up to Flamingo Toes, Today’s Creative Blog, The Shabby Creek Cottage, Tidymom, Whipperberry,
My Repurposed Life, 30 Days, Tatertots & Jello, and other great parties found on my party page.

Hi Kenyanta! They are little disposable condiment containers. I found them with the paper plates and plastic cups at Target.

Weird question: BUT; where did you get the individual plastic envelopes for the mutant animals?

They are little jewelry bags! You can find them in craft stores that carry jewelry making parts. :)

Hello, I'm trying to do the toxic ooze for my son's party but I don't want to use the adapters (way too expensive). What size PVC caps did you use? Thank!

I used 1 inch PVC caps that I had my husband shorten in length.

Hi Lenette! I don't remember exactly but probably the 2". If you're using the rolled soda bottle as the middle then the size doesn't matter too much because you can make the bottle fit the caps.

What great ideas. thank you so much for sharing your wonderful ideas. i will be using a ton of these.