Skip to Content
Remember the 17 Valentine card ideas I shared on Monday?
I’ve been hinting around that I might try to knock of those amazing superhero Valentines
from Zakka Life. Well, I did! With my own spin, of course. 😉 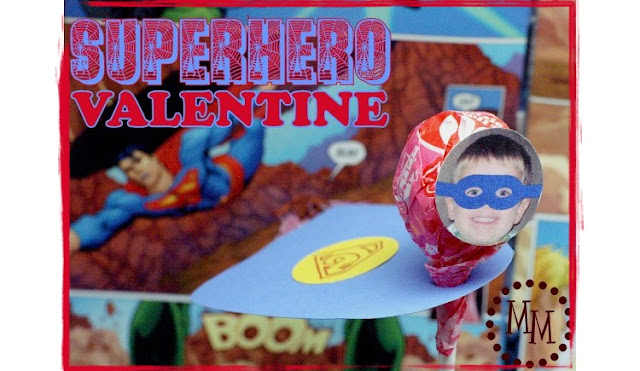 I’m “super” excited to share these superhero Valentines with you all today!
Shall we get on with a mini tutorial?
(I decided to make these valentines from scratch because I wanted something slighty different,
but Zakka Life offers a great template you can download to use if you so choose!) 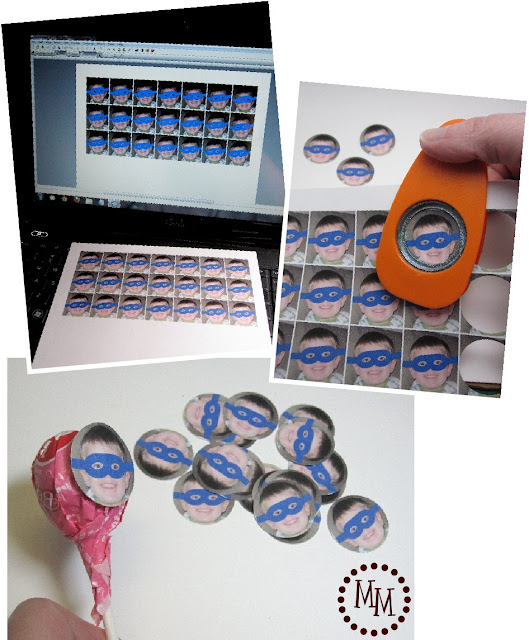 Since my oldest is only 3, and most 3 years olds can’t read the messages on their Valentine cards, I wanted to put his face on these superhero pops so the kids in his daycare class would know who they are from.
I found a great picture of him cheesing for the camera that I already had on my computer. I cropped and resized his head to a little less than 1 inch and drew on a blue mask all in my drawing program. I copied and pasted the image several times, then printed them out.
I used a 1-inch circle punch to cut out his cute little face.
Then I attached them to the side of a Tootsie Roll lollipop.
More on what I used to adhere them together later… 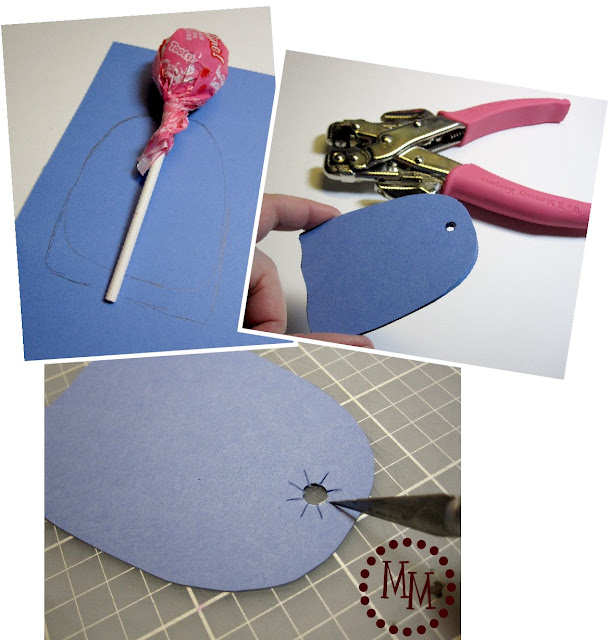 To make the cape, I laid a lollipop on cardstock and freehanded a template. I was able to trim the template to size then used it to draw out the rest of the capes.
I punch a hole for the lollipop stick to go through near the top of the cape then, to be sure the paper wouldn’t tear and ensure the cape wouldn’t fall off of the pop, I used my X-acto knife to cut little marks all around the circle I had punched out. 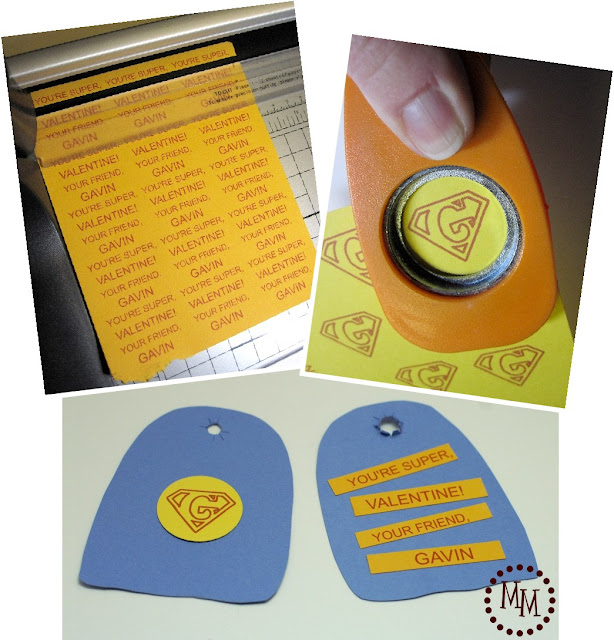 I wrote the Valentine message out in my drawing program then copied and pasted it several times. After printing, I cut the message into strips and glued them to the cape.
I found a great font called Pauls Super Font that turns any letter of the alphabet into the Superman logo! I used to make a bunch of G’s for my little guy then used the 1-inch circle punch to cut them out. I adhered them to the other side of the cape from the Valentine message. 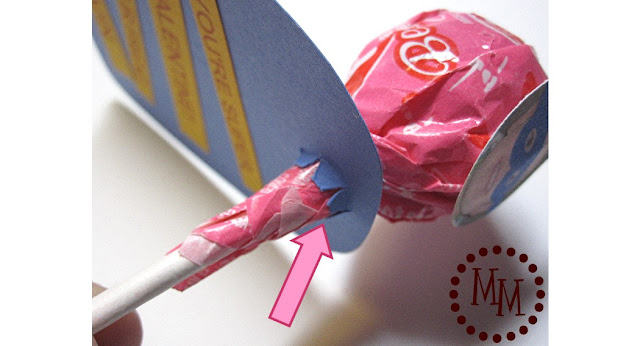 Now I can show you how those little cuts around the circle of the cape work!
When you push the cape up the lollipop stick the cuts in the paper act as a grabber and prevent it from sliding back down. 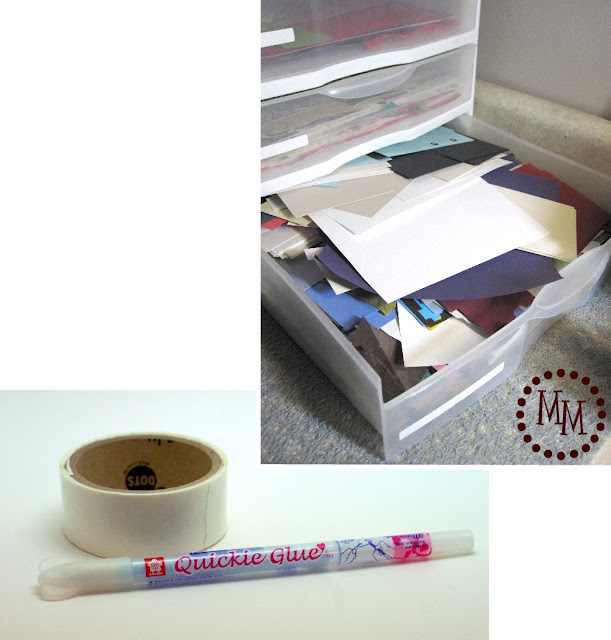 I am super happy to report that all of the Valentines (minus the lollipop part, of course) were made with scrap paper I had stashed away! I have 3 12×12 drawers of scrap paper. Yes, 3!
Can you say hoarder? I just hate to let a decent-sized piece of paper go into the trash if it can be used in a future project.
I think that bodes well for future Craft Your Stash challenges, don’t you? 🙂
Also, a bit about the adhesives I used for this project…
I used large glue dots for the “Super G” and my little guy’s face. You definitely want to use a dry adhesive when you attach something to the lollipop paper!!
I used a glue pen to adhere the message strips to the cape. Since they were so thin, the glue pen was perfect! You could also use a glue stick. 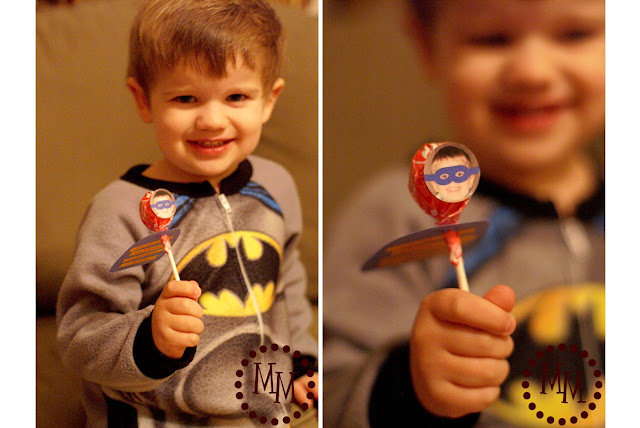 My little guy did not know what type of Valentines I was making for him to take to school. He was so surprised and excited when he saw them! Totally made it all worthwhile. 🙂
He was also curious as where the blue mask was he was wearing in the photo. It seems 3 year olds don’t understand the art of Photoshopping… now I have a new project. Make a blue mask! lol!
I link to these great parties.
Click here to cancel reply.

I saw you on Tater Tots and Jello. Would you please be willing to share this fabulous post with my readers for Fun Stuff Fridays? http://www.toysinthedryer.com/2012/02/14-days-of-valentines-fun-stuff-fridays_10.html

Fabulous idea! Gavin is a doll too!

These are SO cute Michele!! I love them!! And hello, why have I never tried the slit trick so the stick wouldn't tear. SO smart. And I owe you an e-mail, so i'm off to respond! Have a great weekend my friend!

Allison {A Glimpse Inside}

These are so darn cute Michele!! Love it! Thanks for linking up this week! I shared this on AGI's FB page.

Seriously adorable. How clever are you! I love the flying cape!